A PLACE In The Sun’s Laura Hamilton went to hospital after having a bad reaction to her second coronavirus jab.

The TV star, who suffers from immune deficiency disease idiopathic thrombocytopenic purpura, developed blood spots and was urged to go to A&E.

She shared a picture from hospital on Instagram and wrote: “Was supposed to be @corinthialondon for a breast cancer afternoon tea…

“Instead I’m in A&E after a reaction to the second covid jab! #itp @concordemedialondon.”

The 39-year-old then thanked the NHS staff for looking after her and reassured fans she was fine after undergoing tests. 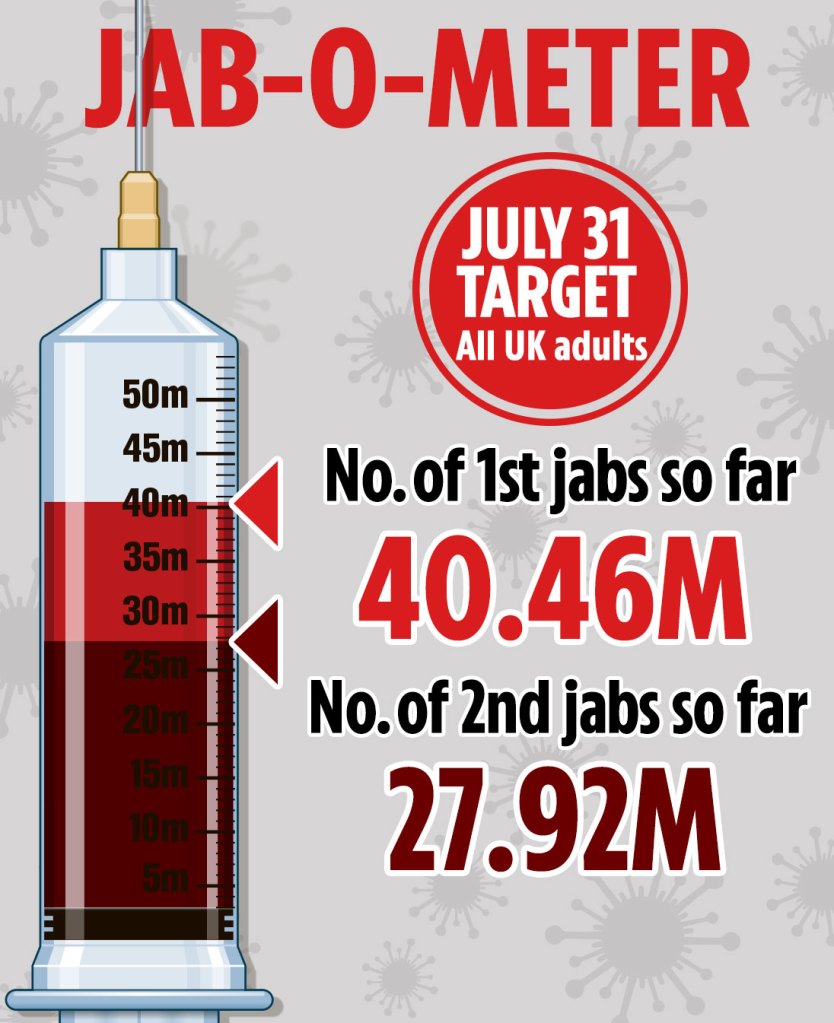 Property expert Laura received her first dose of the Covid vaccine earlier than others her age because of her ITP.

She has previously spoken candidly about the illness, which is a low platelet count in the blood and causes her to bruise easily.

Meanwhile, although proven to be safe and effective, coronavirus jabs may cause short-term side effects.

Laura is a popular telly star[/caption]

They vary depending on the jab, but overall an estimated one in five people will experience at least one symptom, data suggests.

Pfizer/BioNTech‘s jab was first to be approved in the UK shortly followed by Oxford/AstraZeneca‘s vaccine. The Moderna vaccine came on stream in April.

They each require two doses to provide longer-lasting protection, with a maximum interval of 12 weeks between them for each vaccine.

The vaccine programme is in its second phase, speeding through the healthy population under 50 years old.

Laura thanked the NHS for looking after her[/caption]

As the rollout gets closer to those in their 30s, officials are expected to announce that anyone under 40 will be offered an alternative to the Oxford/AstraZeneca jab.

While it is natural to question a new vaccine, experts told The Sun the public can be reassured of its safety.

The evidence shows common side effects are similar to those seen with the flu jab.

Therefore if you are feeling feverish, achey, and a bit like you have a hangover, it’s likely to be caused by the vaccine you had in the two days prior.

Speaking to The Sun, Dr Sarah Jarvis, GP and Clinical Director of Patientaccess.com said that all vaccines cause side effects in some people – but that this is largely because they are designed to boost your immune system.

Dr Sarah said: “When your immune system is learning to fight off an invader, lots of white blood cells rush to where they’re needed and produce natural chemicals.

“That means most vaccines, including the annual flu vaccine, can lead to mild redness, tenderness of swelling around the area you had the injection.

“In the Covid-19 vaccine trials, all the side effects seen so far have been mild and very similar to those seen with other vaccines like the yearly flu vaccine.”

TO sign up with the Royal Voluntary Service, which organises our Jabs Army shifts, register by scanning the QR code below with your phone, or visit the website.

And if you are one of the existing 50,000 recruits but have not yet been able to do any shifts, find out where you are needed by clicking on your GoodSAM app.

Make sure the Location setting is enabled on your phone
Click on the Future Tasks tab and volunteering shifts available in your area will appear. If there is one you can do, click Accept.

It will give details of vaccination centres and when and where to report.

50 towns, cities and council areas where the Jabs Army needs you now

Moment traffic warden flies 10ft as he’s ‘mowed down by road rage driver, 55, in row over right of way at junction’