A BABY missing in the English Channel after his whole family drowned trying to reach the UK has been found washed up in Norway.

Police used DNA to confirm a child’s body discovered earlier this year is that of tragic 15-month-old Artin Iran-Nejad.

A major search was launched to find Artin after the migrant boat his family were in capsized and sank off Dunkirk on October 27.

His dad Rasoul and mum Shiva, both 35, drowned along with their daughter Anita, nine, and son Armin, six.

They became trapped in the cabin when the overcrowded dinghy was flipped upside down by 16ft waves.

Fifteen other migrants were taken to hospital, but little Artin and two adults unrelated to the family remained missing after a search was called off.

Now it has emerged his body was discovered almost 600 miles away in south-western Norway.

Police were initially unable to identified a toddler who was found dead on the shore near Karmoy on New Year’s Day.

“We didn’t have a missing baby reported in Norway, and no family had contacted the police,” investigations chief Camilla Tjelle Waage told the BBC.

“The blue overall wasn’t a Norwegian brand either [and] that indicated the baby was not from Norway.” 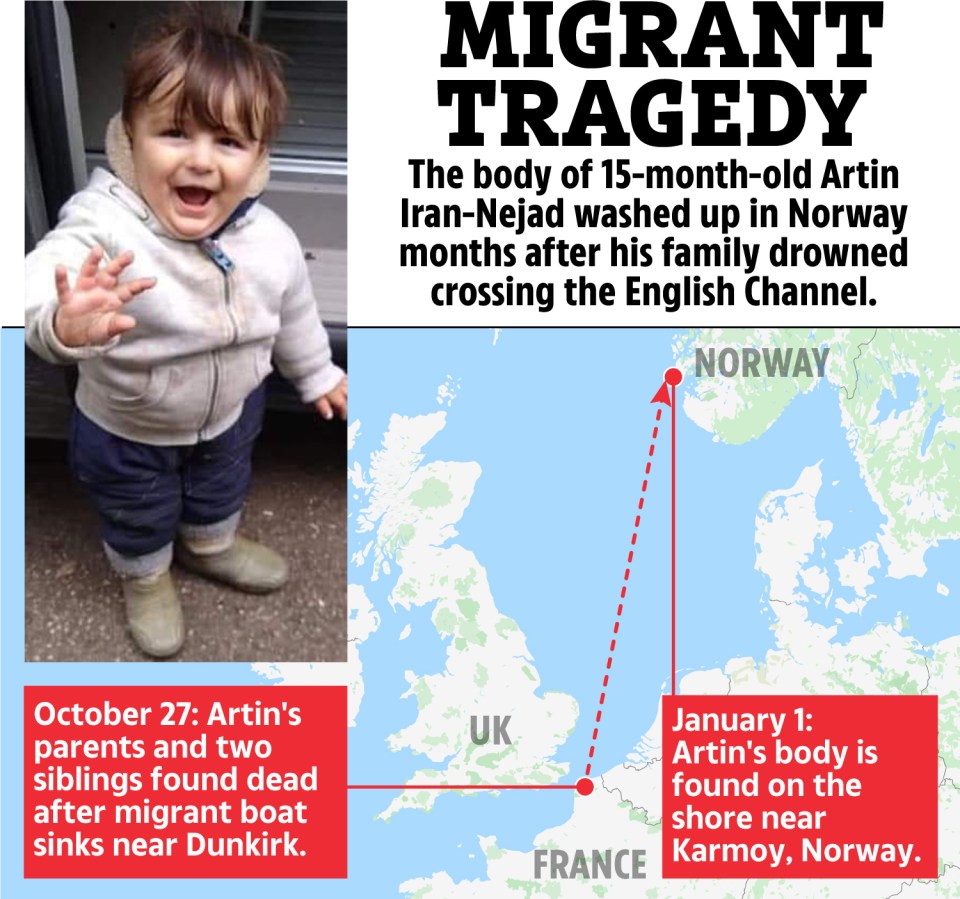 Forensic scientists at Oslo university were able to obtain a DNA profile that matched the missing boy.

His remains will be flown back to Iran for burial, police said today.

Relatives had spoken of their anguish at not knowing what had happened to Artin for more than seven months.

The Kurdish family had left their home in Sardasht in western Iran on August 7.

They travelled to Turkey and Italy before reaching a makeshift camp in the Puythouck woods in Grande-Synthe, near Dunkirk.

Artin’s parents reportedly spent days agonising over whether to go ahead with the perilous sea journey to England.

Tragic final texts from Shiva to relatives reveal how they knew they might not make it but had “no choice”.

One text said: “If we want to go with a lorry we might need more money that we don’t have.”

Shiva also wrote: “I have a thousand sorrows in my heart and now that I have left Iran I would like to forget my past.”

Friends at the camp said they pleaded with the family not to step on board the day-tripper fishing dinghy.

Farhad Shekari, 28, who had intended to cross alongside the family, told The Times: “I told people not to get in the boat. I said it was too dangerous.”

But according to Farhad, evil people smugglers forced the desperate migrants onto the boat, packing it until it was full.

He continued: “[He] was forcing people to get on the boat. He was saying go, go, go …The smugglers are only interested in one thing and that is money.”

Another man who had been living next to the family’s two-man tent in the woods told how the parents grappled with the decision.

Ahmed, 30, said: “The last night before he left, the father was fearing for the children’s lives.

“They were all desperate and crying.

“Rasoul was saying, ‘I want to be in peace, I don’t want to fear for my life any more’.

“They only wanted for their children to go to school in England and have a better life.”

The family reportedly paid smugglers more than £21,000 after selling all their possessions and borrowing from family members.

Rasoul’s brother Khalil said he pleaded with him not to cross the Channel, the Telegraph reported.

Khalil said: “We begged him to not try to cross by boat. He insisted on going.

“He told me that there were giant sea waves. He said: ‘If I knew it was this dangerous, I would never have tried it’.”

Khalil said his brother had initially tried to travel to Germany or Switzerland, but later changed his mind for unknown reasons.

French prosecutors launched a manslaughter probe into the gang that operated the boat.

It comes as record numbers of migrants have made the sea crossing from France in the first months of this year.

More than 1,000 crossed last week alone, including 89 picked up in four boats yesterday, and more arrived this morning.