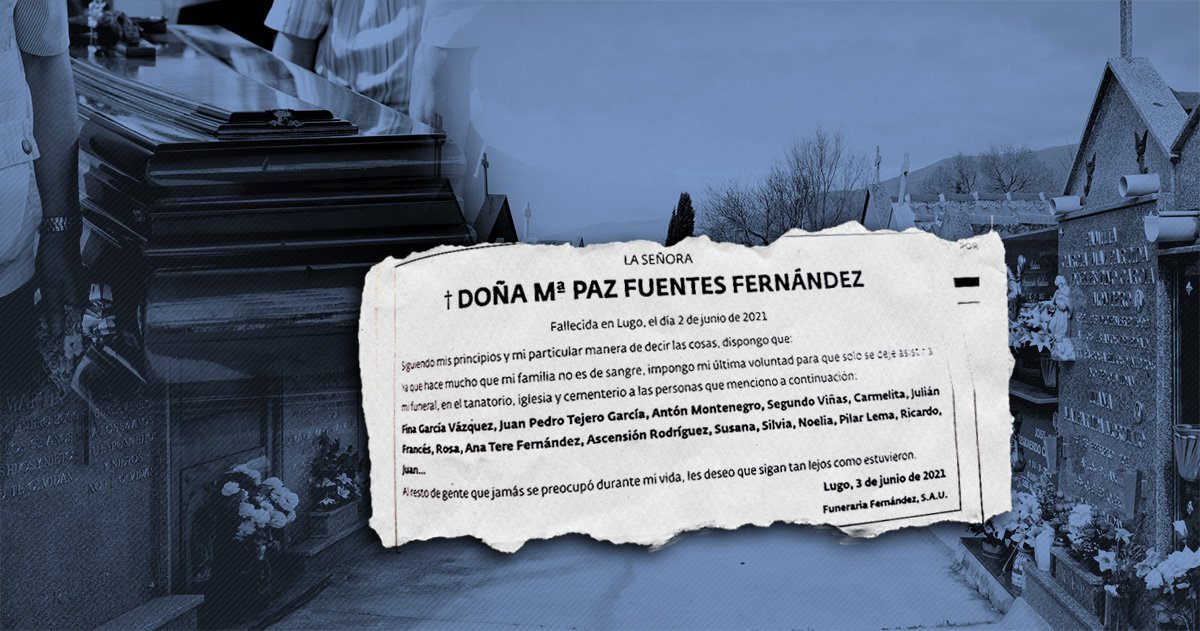 There comes a time in all of our lives when we have to start thinking about our funerals.

Some like to request that their favourite song be played, while others specify the flower arrangements and where they would like to be laid to rest.

But for one woman in Spain, the priority was making sure certain family members were barred from attending.

Maria Paz Fuentes Fernandez, who died on June 2, used her obituary in a newspaper to publish an exclusive guest list for her funeral.

She wrote: ‘Since my family has not been by blood for a long time, I declare in my last will and testament that only the people mentioned below can attend my funeral service, be it at the funeral parlour, church or cemetery.’

The woman, whose age has not been reported, then listed 15 names.

She added: ‘To everyone else who never cared during my life, I want you to carry on living far away from me, just like you were before.’

The obituary was published in the El Progreso newspaper in Lugo, Galicia, and has since gone viral online.

Some people described the woman as ‘brave’ for speaking her truth in her final moments.

One Twitter user said: ‘If they left her alone during her life, they can get lost with their hypocrisy, well away from her funeral. Great lesson from this lady putting them in her place.’

Another said: ‘My respect and total admiration for Mrs Maria Paz, rest in peace.’

But others branded the ‘guest list’ a ‘disgrace’, saying she must have died an ‘unhappy, spiteful woman.’

One said: ‘Dying bitter has to be one of the saddest ways to die, truthfully.’

Current coronavirus restrictions in Galicia allow for up to 25 people to attend funerals and cremations.

Rumour: Starfield out late 2022 and Guardians Of The Galaxy won’t be live service title

Toddler girl, one, dies after she was found unresponsive in garden pond as horrified locals say they heard ‘screaming’

Daughters of dad, 38, who died of cancer devastated after thieves steal motorhome full of memories of final trip