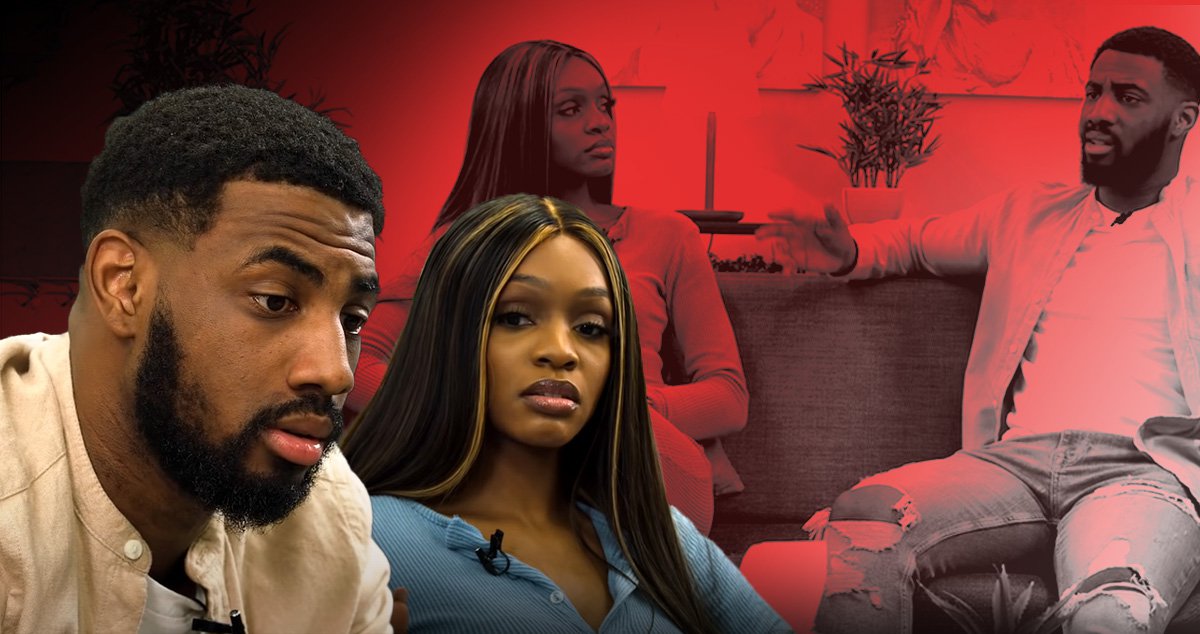 Blue Therapy star Deborah was at the centre of the finale episode’s bombshell revelation after her boyfriend, Jamel, confessed to cheating on her with his ex.

The YouTube series, created by Trend Centrl, follows two young couples as they hash out their relationship issues in therapy sessions.

During the sixth and final episode of series one, poor Deborah discovered her suspicions were right all along and Jamel had been involved with someone else.

However, it wasn’t just a random woman – Jamel had cheated with an ex-girlfriend who he had been training in fitness sessions.

Opening up about the admission, Deborah told Metro.co.uk: ‘I wish I didn’t go back into the room [after storming out]. It was a big shock for me because obviously I knew he was training his ex so it was kind of like a slap in the face, the fact that I decided to trust him on that front.

‘I was quite annoyed that I didn’t trust my intuition even though I had a feeling that he was just doing things that he shouldn’t be doing. The fact that it was an ex and I really thought they were done, it really shocked me and it was quite embarrassing if I’m honest.’

It was particularly heartbreaking for Deborah as they’d both dropped the L-bomb.

‘We have had conversations about love and we have said to each other that we do love each other,’ she revealed.

However she added: ‘I feel like Jamel says it more so than me.’

The cheating revelation quickly turned Jamel, who was a fan-favourite, into the biggest villain of Blue Therapy – even trumping Paul who’d previously been the target of criticism.

Viewers supported Jamel in earlier episodes as they felt Deborah was too materialistic. She had previously equated love to receiving designer gifts and being wined and dined at plush restaurants.

However, she feels the audience ‘misunderstood’ where she was coming from.

‘At the start of our relationship, we were going to fancy restaurants and Jamel was buying me gifts, even if it wasn’t the most high-end items, that was the sort of relationship that we had,’ Deborah explained.

‘So for me when that completely changed and all of a sudden he’s saving for a house and he doesn’t want to go out or buy me stuff, it was just a big change for me because it wasn’t a lifestyle I was used to.’

She continued: ‘People were saying I was a golddigger, I was broke and with Jamel just to get stuff. That’s completely not the case, I have a full-time job and have my own business and I look after myself.

‘Before I was with him that’s what I was doing for myself, going to these restaurants and buying myself these things.

‘But I didn’t really pay attention to what people were saying. Everything that’s come out, I don’t regret anything I’ve said. It’s still my reality.’

She recalled: ‘A lot of people were saying Jamel should leave me. I don’t feel like Jamel supported me publicly but behind the scenes [he did].’

A huge debate about Blue Therapy has been around whether the show is scripted or not.

Deborah insisted: ‘Why would we come on YouTube and put our lives out there if it’s not reality? People just wanted it to be fake and not a real situation and it actually is our reality.

‘The conversation and the topics was guided but in terms of what we said and the things we were actually going through, it wasn’t scripted at all.’

After the cheating revelation, everyone wants to know if Jamel and Deborah are still together.

‘In terms of me and Jamel I’d say it’s complicated,’ Deborah said.

‘We are trying to work through it because after watching episodes and having some self reflection – not saying what he did was right – but I could kind of see how I could have played a little bit of a part in his disconnect in our relationship.

‘That’s like 1% – 99% it’s him and he shouldn’t do that – but 1% is me. I guess you could say we’re working towards developing our relationship and seeing if we can mend what was broken.’

A point of contention in the therapy sessions was the fact that Jamel hadn’t introduced Deborah to his family after a year of dating.

However, she’s actually relieved now that it didn’t happen, explaining: ‘I’m not too upset about it because after all that, it made me realise that we still have a long way to go and because of our culture, when a female meets the male’s family, it’s super serious.

‘I feel like right now, we need to reflect and decide whether we want to continue together.’

All Blue Therapy episodes are available to watch on YouTube.

MORE : Are the Blue Therapy couples real? Director reveals all about viral YouTube series that you need to watch