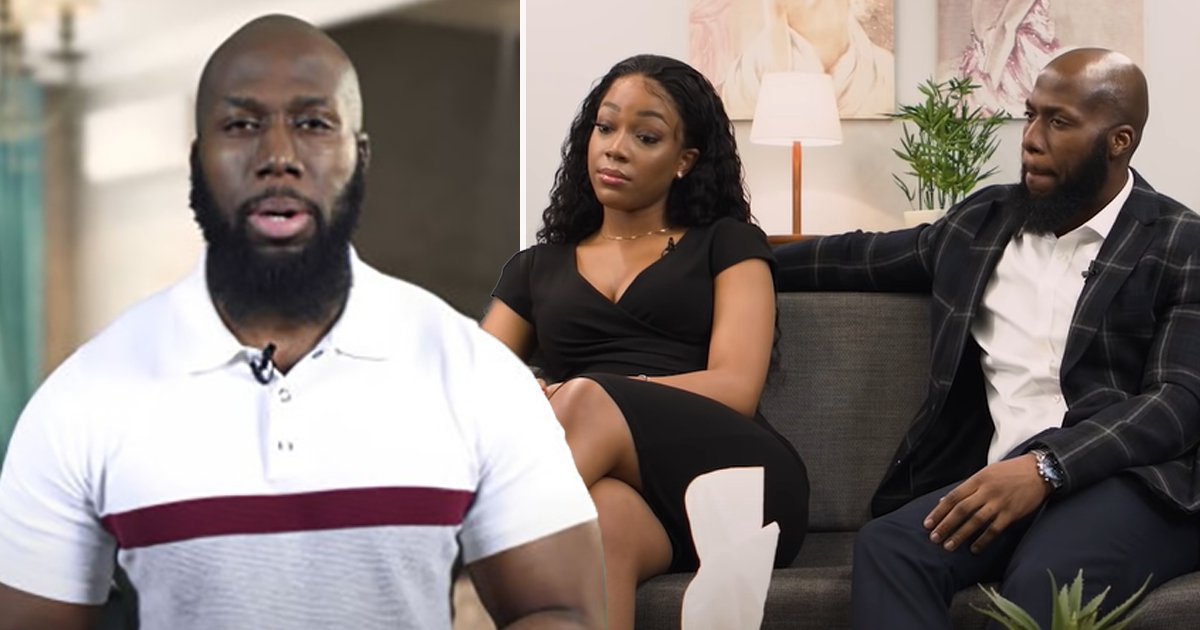 Blue Therapy’s Paul Bridges has undeniably been the most divisive cast member of the hit YouTube series – and it shouldn’t surprise anyone that he has strong feelings about it.

Over the past six weeks, viewers have watched Paul and his girlfriend Chioma hash out their relationship issues in counselling sessions with therapist Denise – and it has made for both explosive and entertaining viewing.

Whether they bickered about trivial subjects such as Afrobeats and food or more serious topics like weight and family, Paul and Chioma kept us all on the edge of our seats.

However, Paul in particular has found himself at the centre of debates with many branding him misogynistic and holding him up as an example of toxic masculinity.

He’s been criticised for his attitude towards Denise and received backlash for commenting on Chioma’s weight.

But who is the real Paul?

‘If a person can judge someone based off a few edited clips in a video, what does that say about you?’ Paul told Metro.co.uk about the criticism.

‘When people say I’m the face of this, and that it’s all bull crap. That’s what they want.

‘They’re looking for a reason to be upset, because they are upset, but they can’t just enjoy the entertainment element of it or the educational element of it.. I’m not the problem. I’m the nice guy, really, but they just don’t know me like that.’

Paul revealed that he suggested to Blue Therapy creator Andy Amadi that he be filmed outside of the therapy sessions so viewers could see the real him.

He explained: ‘I’ve seen a few clips of a situation where I was in a heated moment and my back was against the wall. I was defending myself the whole time.

‘If I had the opportunity to actually come out and they could see me with Chioma out of that situation, then they’ll be able to understand why we even had a relationship in the first place.’

Speaking of Chioma – it was her idea to start the therapy sessions in hopes of putting the spark back into their three-year relationship.

She had been a fan-favourite for much of the series but particularly won favour with audiences during an uncomfortable conversation with Paul about her weight.

Chioma linked her supposed weight gain to the reason Paul wasn’t having sex with her any longer, but he has insisted his words were misconstrued.

‘First of all, I didn’t call her fat, second of all I didn’t even say she’d put on weight,’ he said.

‘She called me fat – she said I used to be fat. I never said she was fat at all. I just asked if she tracked her calories and if she felt she’d gained weight based on what she’d been eating.

‘If a lady does not want a man to talk about her wigs, she should not ask. That’s my point. What is the right way to tell a lady she’s gaining weight, especially if she’s asking you.’

He continued: ‘The person is not following their own program and then they’re asking you if they’ve gained weight. Do you want to lie to them and say “you haven’t” and watch them turn into something else?

‘I think I said very nicely you wouldn’t know if you’ve gained weight because you’re not tracking your calories. There is no better way, in my opinion, to say it. I don’t think I’ve done anything wrong.’

Paul added that he felt Chioma should have publicly defended him on social media when he was being ‘slandered’ over the controversial episode.

The same goes for the debacle over his sister, who Chioma accused of ‘dumping’ her children on her to babysit.

‘I’m wondering why Chioma hasn’t intervened now. She knows I’m not a social media person, she put me out there, making me look like a mad man and she’s not defending me in public.

‘We can be talking in person but then in public, you’re not saying anything.

‘The situation with my sister, in my opinion, has been exaggerated. My sister doesn’t club all the time, she could have went out to eat. When she goes out to eat and if I’m busy with business she could look after the kids. What’s wrong with that?’

He added: ‘I don’t really think it’s a big deal. At the end of the day, people do things for people that they love, even if it’s not for them directly, it could be for them indirectly.’

Some of the revelations that have emerged in the therapy sessions have been so shocking that many have questioned whether Blue Therapy is real and if the couples are even together.

Andy, who created and directed the series, has admitted that the therapist is an actress and that some of the show is scripted.

However, Paul has promised he isn’t faking anything.

‘First of all, I haven’t followed any script. I’m not an actor. I’ve never followed a script in my life. So that just gets that out of the way. With Chioma and I, we have our own relationship. That’s that,’ he said.

‘We have our own understanding of how we kind of handle our relationship, it is what it is. We have a relationship.’

So, after airing out their dirty laundry, where does Paul and Chioma’s relationship stand now?

He told us: ‘It’s OK. It could be better. It was OK a few weeks ago but then after some things happened.

Blue Therapy has been billed as a social experiment, so has Paul learnt anything from the experience?

The suited and booted businessman explained: ‘Yes, because I can definitely look back and reflect and I can learn from… the discussions that people have and just me looking back and seeing the mistakes I’ve made, and people telling me that, look, what you’re saying isn’t too bad, it’s just how you say it.

‘So when I’ve learned in that way, I’m able to apply that to my life and relationship.’

All Blue Therapy episodes are available to watch on YouTube now.

MORE : Are the Blue Therapy couples real? Director reveals all about viral YouTube series that you need to watch

MORE : I don’t care that Blue Therapy is scripted – it’s the realistic look at young Black love I needed

When is season 4 of Stranger Things coming out?

Who is Shannon Singh from Love Island? Age, social media and job