SIXTEEN people have died in water tragedies in just five days as a heatwave scorched the UK.

The string of tragedies has seen a 13-year-old boy drown in a lake while the woman in her 60s was pulled from a harbour. 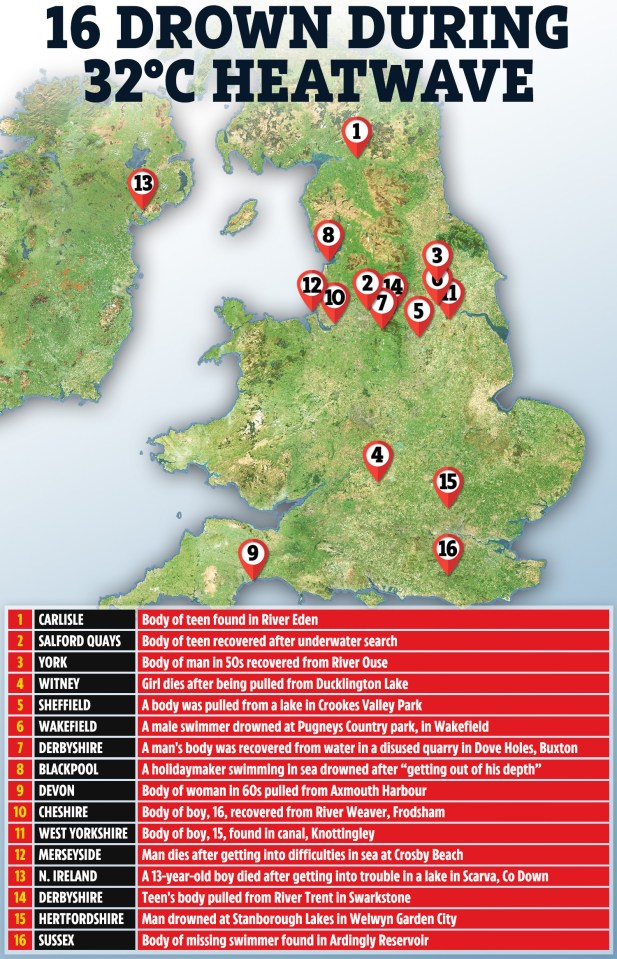 Most recently, a teenage boy was pulled from the River Trent in Swarkstone, Derbyshire, around 11.30am after getting into difficulty on Tuesday afternoon.

And later that evening a man drowned at Stanborough Lakes in Welwyn Garden City, Hertfordshire.

Elsewhere on Tuesday, a man in his 20s died after being pulled from the sea, at Crosby Beach, Merseyside.

And in West Yorkshire, 15-year-old Caden Taylor failed to surface after jumping into the Knottingley and Goole Canal with friends.

The wave of deaths comes as temperatures soared to 32C and Brits packed beaches and lakes to cool off.

Authorities have issued several warnings about the dangers of swimming to cool off during high temperatures.

Steve Holton, the area commander for Hertfordshire Fire and Rescue, said: “Please be aware that water is a lot colder than it looks and only swim in places that have life guards.”

Even on days as hot as we have had recently, canals can still be very cold and cold water can cause cramps in even the strongest swimmers.

A holidaymaker in the sea near Blackpool, Lancs, died after “accidentally getting out of his depth”, and 16-year-old Mohammad Abdul Hamid drowned after entering the River Eden in Rickery Park near Stony Holme, Carlisle.

A further eight deaths were recorded on Sunday – the hottest day of the year.

And a teenage girl was confirmed to have died after getting into difficulty at Ducklington Lake, in Witney, Oxfordshire.

The grim discovery of another body was later made at Pugneys Country park, Wakefield, after a man swimming on an inflatable unicorn was reported missing.

Councillor Michael Graham said the “tragic incident” served as a “stark reminder of the very real dangers of swimming in open water”.

A similar warning was issued after the body of a missing swimmer was found in Ardingly Reservoir, Sussex.

In York, the body of a man in his 50s was recovered from the River Ouse, close to the Water End Bridge, on Sunday evening.

The following day, two teenagers drowned – Jay Moffett, 13, died after getting into trouble in a lake in Scarva, Co Down, Northern Ireland, and a 16-year-old boy in the River Weaver in Frodsham, Cheshire.

Authorities are continuing to issue warnings as temperatures remain in the high 20s and low 30s – with more heat on the way.

And Det Ch Insp Tony Nicholson of West Yorkshire Police said: “I would like to advise people of the dangers posed by open water.

“Even on days as hot as we have had recently, canals can still be very cold and cold water can cause cramps in even the strongest swimmers.”

Girl, 15, raped in the sea in front of unaware beachgoers as cops hunt teen

Stepdad screamed 'he's gone' as he battled to save boy, 9, struck by lightning

On top of the 16 drownings, a man in his 40s died after falling off a cliff at Dorset beauty spot Lulworth Cove.

The tourist had climbed part-way up the 200ft tall Stair Hole when he slipped and fell.

An air ambulance, coastguards, a lifeboat crew and police raced to the scene at 6.30pm as temperatures soared into the late 20s.

A police chopper seen above the emergency operation in Salford[/caption]

Cop shoots dead own daughter, 6, after firing gun during boozy row to try and scare his wife