THE body of a 15-year-old boy has been pulled from a river and a young man has died after getting into trouble in the sea.

It brings the grim tally of people who have drowned during the July heatwave to 14.

The teenage boy was pulled from the River Trent in Swarkstone, Derbyshire around 11.30am after getting into difficulty yesterday afternoon.

Earlier, a man in his 20s died and another man is fighting for his life after being pulled from the sea, at Crosby Beach, Merseyside.

Emergency services were scrambled at around 7.10pm last night to reports of three men in their 20s in difficulty in the water.

All three were rushed to hospital, but one died a short time later.

A man has died after being pulled from the sea at Crosby Beach, Merseyside, last night[/caption]

One man is in a critical but stable condition, and a third man was later discharged from hospital, Merseyside Police said.

The wave of deaths comes as Brits cooled off on the hottest day of the year, with temperatures soaring to 32.2C yesterday.

In Yorkshire, a schoolboy was found dead in a river and the body of a woman was pulled from a harbour.

Caden Taylor, 15, failed to surface after jumping into a canal lock with friends in West Yorkshire.

His body was later pulled from the Knottingley and Goole Canal, near its junction with the River Aire by emergency services following a 90-minute search.

Caden’s mother Rachael passed away unexpectedly in May and his family is now having to deal with the tragic double loss.

His stepfather Nathan, who was married to Rachael, passed away following a long illness in 2019.

Caden was described as “a lovely lad”. 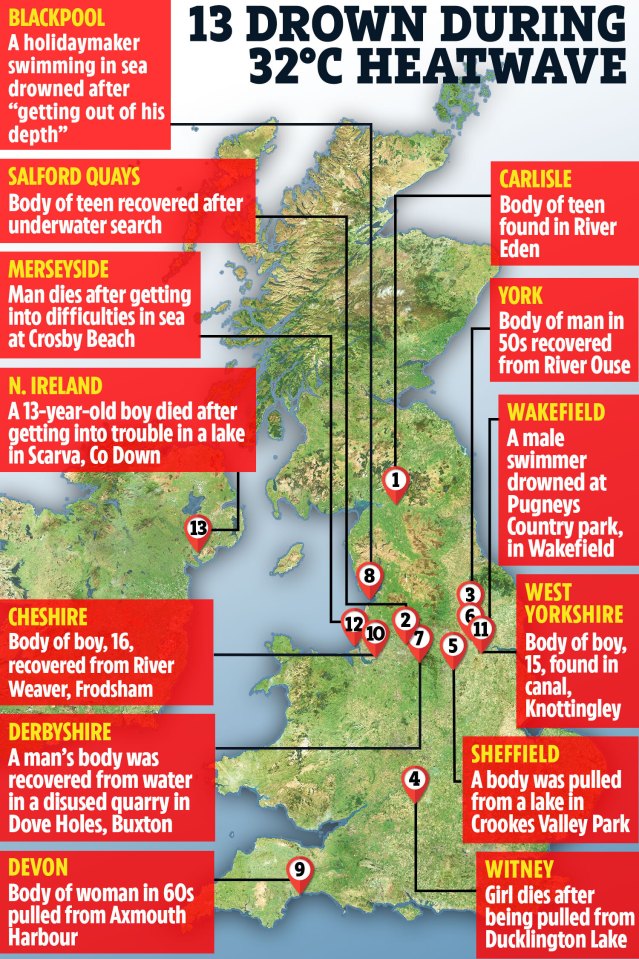 Det Ch Insp Tony Nicholson, said: “This has been a tragic incident in which a boy has sadly lost his life and I would like to advise people of the dangers posed by open water.

“Even on days as hot as we have had recently, canals can still be very cold and cold water can cause cramps in even the strongest swimmers.”

A 13-year-old boy also died after getting into trouble in a lake in Scarva, Co Down, Northern Ireland.

The family of Jay Moffett have paid tribute to the “beautiful” boy who “lit up the lives of everyone he knew”.

Officers searching for a missing 16-year-old boy in Frodsham, Cheshire, confirmed they had found a body.

The body was recovered from the River Weaver at around 11.30am and is believed to be that of the teenager who vanished on Monday afternoon, though formal identification has not yet taken place.

Superintendent Alexander McMillan, from Cheshire Constabulary said: “This appears to be a tragic accident and our thoughts are with the boy’s family at this difficult time.”

Devon and Cornwall Police also today confirmed a woman in her 60s was recovered from the water at Axmouth Harbour.

The victim, from Taunton, Somerset, died at the scene around 1.40pm.

An air ambulance joined coastguards and police at the harbour.

Her death is not being treated as suspicious and the coroner has been informed, a police spokesman said.

It follows the grim discovery of a body at Pugneys Country park, Wakefield, after a man swimming on an inflatable unicorn was reported missing.

He was the eighth person confirmed to have drowned on the hottest day of the year.

Witnesses said the missing bather entered the water with the blow-up toy despite “no swimming” notices.

But horrified families, many enjoying their first day out after months of staying at home, described “a wall of emergency vehicles” lining the water’s edge after the man vanished in the water.

Councillor Michael Graham said: “Our thoughts and sympathies are with the family and friends of the person involved.

“This tragic incident is a stark reminder of the very real dangers of swimming in open water.

“We ask everyone to keep themselves safe and urge people not to swim in places that are not specifically created for swimming.”

And at about 9pm on Tuesday, Derbyshire Police tweeted that “officers are at a stretch of the River Trent near Swarkestone following reports of a person in difficulty in the water”.

“We were called at about 5.30pm and police, specialist search teams and
Derbyshire Fire Rescue Service are still searching the area.

“No further information is available.”

There have been a string of water tragedies across the country as Brits hit lakes and beaches to cool off.

On Sunday, a man’s body was recovered from water in a disused quarry in Dove Holes, Buxton, Derbyshire, just before 11pm.

The tragic discovery was made after a four-hour search operation by emergency services.

South Yorkshire Police said an underwater search team had recovered a body just before midnight, with formal identification having not yet taken place.

It came hours after a teenage girl drowned in an Oxfordshire lake.

Cops revealed they were called to Ducklington Lake, in Witney, at around 2.35pm on Sunday and the girl was then pulled from the water.

However, Thames Valley Police revealed despite being taken to hospital she later tragically died.

The girl’s family have been informed and are being closely supported by specially-trained officers.

Everyone else jumped in trying to look for him. People were screaming and someone was shouting ‘my friend’s drowning’.

Meanwhile police discovered the body of a Ngapee Merenga, 19, who vanished in Salford Quays, Greater Manchester, on Sunday.

Police were unable to revive the teen, who went missing on Sunday afternoon.

“Sadly, despite a rescue operation at Salford Quays this evening, a 19-year-old man has lost his life,” a tweet on Greater Manchester Police’s Twitter account read.

“Our thoughts are with this young man’s family and friends, and the people who witnessed the tragic events.”

The emergency came on the hottest day of the year and The Quays were full of swimmers diving into the water.

Elsewhere, another holidaymaker swimming in the sea near Blackpool, Lancs, on Saturday drowned after “accidentally getting out of his depth”.

The RNLI and coastguard launched a frantic five-hour search for the stricken swimmer and took to the skies in a helicopter to try and establish his whereabouts after his disappearance at around 3.25pm.

Despite their efforts, the man’s body was recovered near to where he went missing a number of hours later after the tide receded.

A man in his 40s also died after falling off a cliff at Dorset beauty spot Lulworth Cove.

The tourist had climbed part-way up the 200ft tall Stair Hole when he slipped and fell.

An air ambulance, coastguards, a lifeboat crew and police raced to the scene at 6.30pm as temperatures soared into the late 20s.

Elsewhere, a boy who vanished after entering the River Eden in Rickery Park near Stony Holme, Carlisle was identified as 16-year-old Mohammad Abdul Hamid.

His family and friends are being supported by officers.

Police launched a search after they received a report of concern for the welfare of the boy at around 9pm by North West Ambulance Service.

The body was found at around 11:45am on Sunday.

In York, the body of a man in his 50s was recovered from the River Ouse, close to the Water End Bridge, on Sunday evening.

Officers attended the scene, along with the fire and ambulance services, after being contacted by kayakers shortly before 5pm.

While formal identification is yet to take place, North Yorkshire Police believe they know the identity of the deceased but are awaiting confirmation.

Meanwhile, a search was launched after a swimmer reportedly went missing in Ardingly Reservoir, Sussex.

Cops used drones, a helicopter and kayaks to scour a huge lake before darkness fell.

Cops revealed a teen girl was pulled from Ducklington Lake in Witney, Oxfordshire[/caption]

A police chopper seen above the emergency operation in Salford[/caption]

Happy Yorkshire Day: What is Yorkshire famous for?