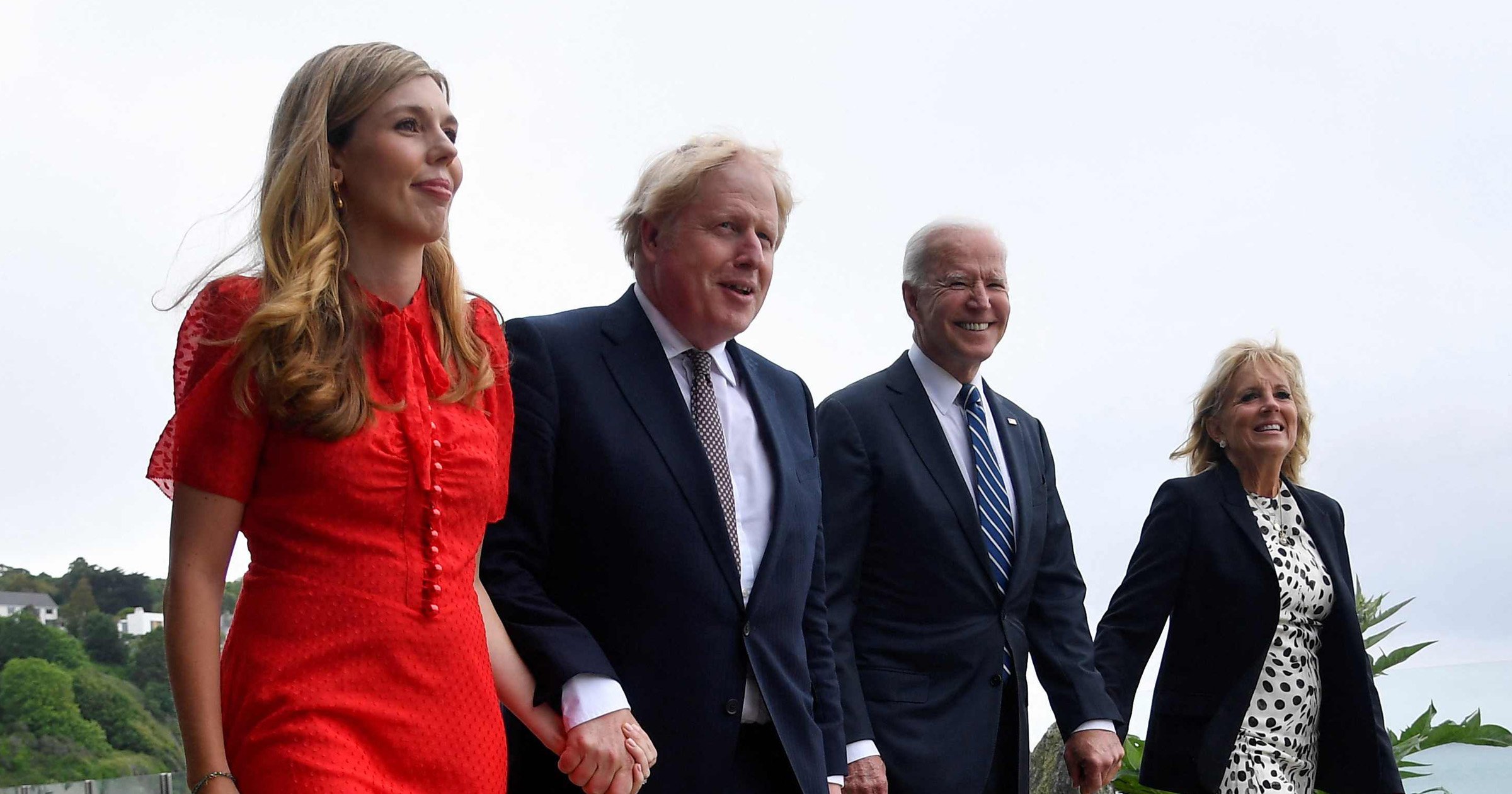 Boris Johnson met with US President Joe Biden this afternoon for talks ahead of the G7 Summit.

The pair, accompanied by their wives Carrie and Jill, were pictured admiring the views overlooking Carbis Bay in Cornwall, where the summit will be hosted.

President Biden remarked: ‘It’s gorgeous, I don’t want to go home.’ It is his first overseas trip and first foreign meeting with another leader.

Ahead of the meeting, Mr Biden said he was looking forward to ‘affirming the special relationship between the United States and the United Kingdom’ – despite Mr Johnson’s dislike of the term to describe the transatlantic partnership because he believes it makes Britain look needy.

The pair appeared to be in good spirits, with Mr Biden even managing to crack a joke as they sat down together before a mob of reporters.

Mr Biden quipped: ‘I told the Prime Minister we have something in common. We both married way above our stations.’

The PM then shook his head as he and the president faced a cacophony of questions from journalists. 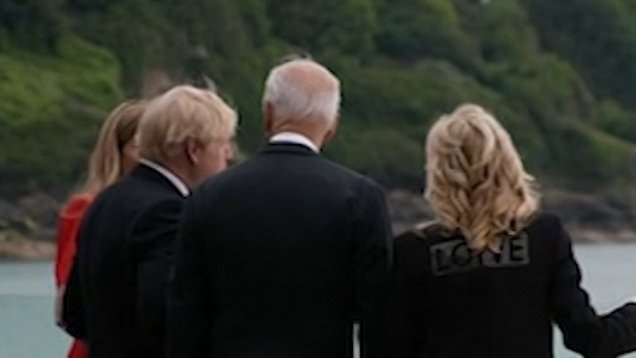 It remains to be seen whether the good mood will last, with the meeting somewhat overshadowed by tensions over Northern Ireland.

Mr Biden is expected to warn the Prime Minister not to let the row over Northern Ireland’s Brexit arrangements put the Good Friday Agreement at risk.

Elsewhere, the two will work on efforts to resume transatlantic travel and agree a new Atlantic Charter paving the way for co-operation on challenges including climate change and security.

But Mr Biden, who takes pride in his Irish roots, will also raise the dispute over the Northern Ireland Protocol which will feature heavily in discussions with the UK and European Union over the coming days of intense diplomatic activity in Cornwall.

The scale of the president’s unease about the UK’s approach to the Protocol was revealed in a leaked memo which showed he took the extraordinary step of ordering the United States’ most senior diplomat in London, Yael Lempert, to deliver a demarche – a formal protest – in a meeting with Brexit minister Lord Frost on June 3.

The Times newspaper reported that Government minutes of the meeting said: ‘Lempert implied that the UK had been inflaming the rhetoric, by asking if he would keep it “cool”.’

The US charge d’affaires indicated that if Mr Johnson accepted demands to follow EU rules on agricultural standards, Mr Biden would ensure it would not ‘negatively affect the chances of reaching a US/UK free trade deal’.

Downing Street did not deny the encounter took place. A No 10 spokesman said: ‘I don’t think you would expect me to get into discussions with other countries.’

The spokesman added that the Government would continue to seek to work ‘consensually’ with the EU to resolve the impasse.

The EU has threatened to launch a trade war against Britain if it fails to implement checks on goods entering Northern Ireland under the terms of the Brexit ‘divorce’ settlement which Mr Johnson signed.

The prospect of a ‘sausage war’ trade dispute came after Lord Frost refused to rule out the possibility that the UK could unilaterally delay imposing checks on British-made chilled meats which are due to come into force at the end of the month.

Can you go to the pub while you’re off sick from work?

At a press conference in Brussels on Thursday ahead of the G7 summit, European Commission president Ursula von der Leyen again insisted the Protocol is the ‘only solution’ to prevent a hard border with the Republic and must be implemented in full.

The Protocol effectively keeps Northern Ireland in the European single market for goods in order to avoid a hard border with Ireland, meaning a trade barrier in the Irish Sea for goods crossing from Great Britain.

The dispute has inflamed tensions for unionists in Northern Ireland while nationalists oppose a hard border on the island.

Mr Biden’s national security adviser Jake Sullivan said the president has a ‘rock-solid belief in the Good Friday Agreement as the foundation for peaceful co-existence in Northern Ireland’.

He added: ‘That agreement must be protected, and any steps that imperil or undermine it will not be welcomed by the United States.’

The meeting of the two leaders comes on the eve of the G7 summit which will bring together the world’s wealthiest democracies at a time when the West faces difficult judgments in responding to the rise of China as an economic and political force and the destabilising actions of Russia.

As part of that process, the new Atlantic Charter will commit the UK and US to apply their combined strength to the enormous challenges facing the planet today, including global defence and security, ‘building back better’ from coronavirus, and stopping climate change.

The original Atlantic Charter was a joint statement made by Winston Churchill and Franklin D Roosevelt in 1941, setting out the UK and US goals for the post-Second World War world.

Mr Johnson said co-operation between the UK and US – ‘the closest of partners and the greatest of allies’ – will be crucial ‘for the future of the world’s stability and prosperity’.

The two leaders have also agreed a new joint taskforce will examine how to resume travel between the US and UK, which ground to a halt as the pandemic hit.

Number of over-65s identifying as lesbian, gay or bisexual increases for first time