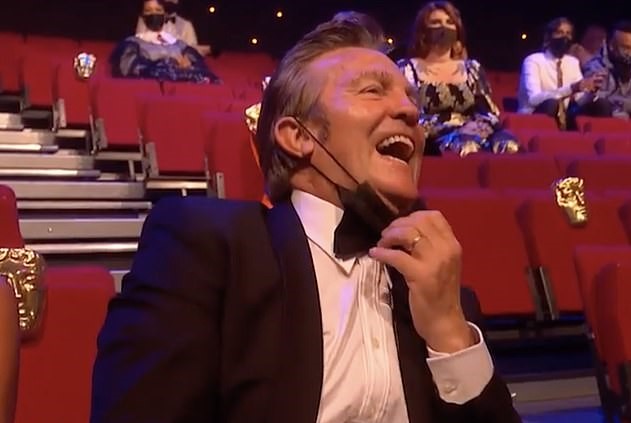 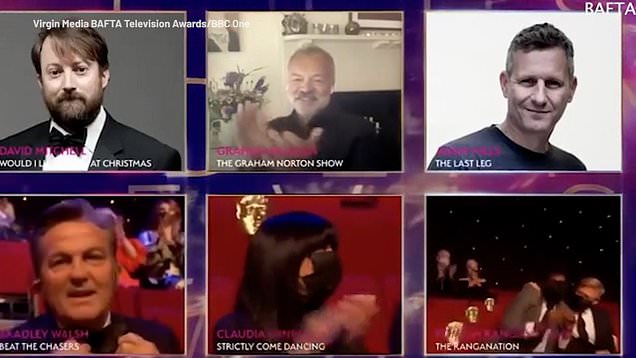 Bradley Walsh has been criticised by Bafta viewers for pulling down his mask to heckle Romesh Ranganathan during the award ceremony.

Stars descended on the Royal Albert Hall for the awards on Sunday, with a strong list of celebs, including Jodie Comer and Billie Piper, walking the red carpet.

I May Destroy You was one of the biggest winners of the night, taking the prize for mini-series, as well as leading actress for Michaela Coel.

Bradley was up for an Entertainment Performance award alongside Romesh, Graham Norton, Claudia Winkleman, Adam Hills and David Mitchell.

The Beat The Chasers host, 60, jokingly said ‘I can’t believe it,’ as Line Of Duty star Adrian Dunbar, 62, announced Romesh, 43, as the category winner.

He then humorously ‘heckled’ Romesh as he walked up to receive the award for Ranganation, yelling ‘It’s a farce’ as the comedian took to the podium.

Romesh hilariously told Bradley to ‘shut up’, which sent the audience into laughter.

Accepting the award Romesh said: ‘Wow thank you so much. I really didn’t expect to win, well there was a good chance…

‘It was much easier for me to do the show this series because I just had to do it from my garage.

‘In many ways I feel like I’ve put in less effort for more reward. That’s what life’s all about in showbiz.’

Once Romesh finished, Bradley moved his face mask down to whistle in support of the win, before again pretending to heckle him.

He then mouthed ‘this is a joke’ down the camera, which was pointed right at him.

While it was all meant in jest, some viewers weren’t happy with the fact that Bradley removed his mask to make the quips.

‘Why is Bradley Walsh repeatedly taking his mask off to whistle and mouth sh**te at the camera? Showing himself up on TV by not following rules that are in place for a reason,’ one person tweeted.

Another penned: ‘Bradley, pull your mask up.’

Others were amused by his shtick.

‘Bradley Walsh mouthing to the camera “I can’t believe it” And then heckling the winner had me howling!’ One viewer wrote.

‘Shame that Bradley Walsh didn’t win that bafta,’ said another.

Metro.co.uk has reached out to Bradley Walsh’s representative for comments.

The Bafta TV Awards is available to watch on BBC iPlayer.

‘I was with Janis Joplin’s drug dealer the night she died’: An excerpt from Miss Mercy’s groupie autobiography ‘Permanent Damage’

Love, Victor season 2: What happened in series 1 of the Disney Plus show?