A “HERO” British dad who died trying to save his two young daughters off a Portuguese beach has been named as financial consultant Trevor Pelling.

The 45-year-old was pulled out of the ocean by surfers yesterday afternoon.

Locals and a nurse who was on the beach spent nearly an hour trying to save Mr Pelling before he was pronounced dead.

The tragedy happened just after 2pm on Thursday at Calada Beach in Encarnacao about an hour’s drive north-west of Lisbon.

The British holidaymaker rushed to stop his two daughters, aged 12 and 9, from being swept out to sea when they got into difficulties because of the strong current.

They were later taken to Santa Maria Hospital in Lisbon for a medical examination.

A psychologist is assisting the grief-stricken youngsters and their mum, who has not been named.

The dead man was initially described as a Dubai-born national who was travelling on a British passport.

This morning he was named in Portugal as a British financial specialist called Trevor Pelling, who was on holiday with his family and had been based in the Middle East for work reasons.

Mr Pelling described himself on LinkedIn as an Abu Dhabi-based area manager at deVere Acuma, part of one of the world’s leading independent financial advisory organisations.

Lifeguard patrols on the beach where the tragedy occurred are not due to begin until June 12, although qualified Navy specialists working to protect the public through the so-called ‘Seawatch’ project were mobilised after the alarm was raised. 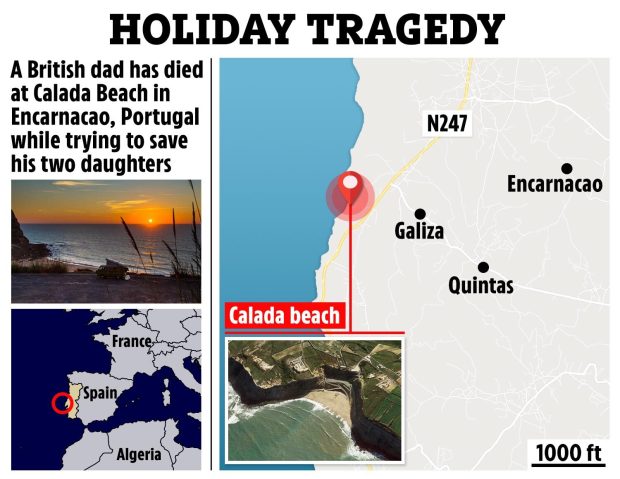 Calada Beach – Praia da Calada in Portuguese – is a long sandy beach that has the shape of a seashell.

The popular surfers’ spot is surrounded by tall cliffs which protect it from strong winds.

Portugal’s National Maritime Authority said in a statement issued late yesterday: “A man aged 45 died today at Calada Beach, an unguarded beach in the district of Mafra, as he was trying to help his two young daughters aged 12 and nine when they got into difficulties in the water.

“The alert was received at 2.40pm through the District Operational Command Assist Centre in Lisbon.

“Cascais Maritime Police officers and officials from the “SeaWatch” project were immediately sent to the location using an Amarok vehicle.

“Upon arrival at the site they found a man had been pulled out of the water by two surfers and a nurse who was at the scene had begun to perform life-saving techniques which were then continued by the firefighters.

“Despite their attempts to resuscitate him, it was not possible to reverse the situation and he was declared dead at the scene.

“The body of the dead man, who was of foreign nationality, was later transported by the volunteer firefighters to the Institute of Forensic Medicine in Torres Vedras.

“The two children were taken by ambulance to Lisbon’s Santa Maria Hospital, in a stable situation, accompanied by their mother.

“A Maritime Police psychologist is providing support to the dead man’s relatives and one of the surfers who pulled him out of the water.”

A routine police investigation into the incident is understood to be underway.

Pualo Agostinho, Cascais Maritime Police chief whose remit covers the area where yesterday’s tragedy took place, said he was unable to confirm the name of the dead man.

He added: “The whole family were on the beach, the father, mother and their two daughters. It was a beach that didn’t have any lifeguards on it because the lifeguard service doesn’t start till June 12.

“I don’t know if he was unable to swim or couldn’t swim well.

“The girls were taken to Santa Maria Hospital in Lisbon with their mum. My understanding is they have now been released from hospital.”

Woman, 28, who stuck head out of window was killed by branch, inquest rules

A source close to the case added: “The family were on holiday here but I don’t know if they were staying near the beach or further afield.

“They had driven to the beach where the tragedy occurred and the car was left there while the daughters went to hospital.”

It was not immediately clear today if the post-mortem has already taken place.