THE plague of mice ravaging swathes of Australia are almost certainly descended from rodent stowaways on British convict ships nearly 250 years ago.

They have since gone on to multiply massively with numbers surging to the biblical proportions now seen terrorising farmers, destroying crops and pillaging grain stores.

Tens of millions of rampaging rodents have sparked devastation stretching 1,000km from Brisbane down to Melbourne and tormented rural communities for months.

However, the common house mice (mus musculus) is thought to have only appeared in the vast country in the wake of the arrival of the British First Fleet – which carried 750 convicts to Botany Bay in 1788.

They scuttled through holds and cabins as the ships made their way to the other side of the world before the rodents then scurried onto dry land with the new settlers.

DNA sequencing tests indicate there is a “strong link” with the mice found Down Under and those seen in Western Europe, reports the US National Library of Medicine National Institutes of Health.

It states: “Invasive species have a major impact on Australia, threatening native biodiversity and causing massive costs to agriculture every year.

“The house mouse is a highly successful invader worldwide and particularly throughout mainland Australia and surrounding islands.

“It has become a serious agricultural pest in Australia, particularly in grain-growing regions where it shows aperiodic but increasingly frequent outbreaks.

“Australia was probably the last continental landmass to be colonised by the house mouse, presumably remaining mouse-free until the arrival and settlement of the first Europeans colonists, about two centuries ago.

The state government has secured 5,000 litres of the toxic rodent poison bromadiolone[/caption]

A mouse carcass is pressed into the road near Bogan Gate, Australia[/caption]

“The arrival of the British First Fleet in 1788 is often cited as the most probable origin of house mice into Australia.”

However, some believe the mice may have actually arrived on Dutch ships in the 1600s.

Last week, we reported how the Australian government is set to blitz its mouse plague with “napalm for mice” amid fears the infestation could double every three weeks.

In just three months, two mice can spark a colony of almost 400, rapidly spawning to tens of thousands, the Daily Mail Australia reported.

A mouse can live for up to two or three years – and females can start reproducing at just six weeks of age.

They can give birth to ten babies every three weeks and the mum can get pregnant again the very next day.

Experts have warned “without a concerted baiting effort in the next few weeks this could easily turn into a two-year plague event”.

And in a desperate bid to stop the mouse menace, the government in New South Wales has secured 5,000 litres of the toxic rodent poison bromadiolone – dubbed “napalm for mice” – which is currently banned for agricultural use in the country. 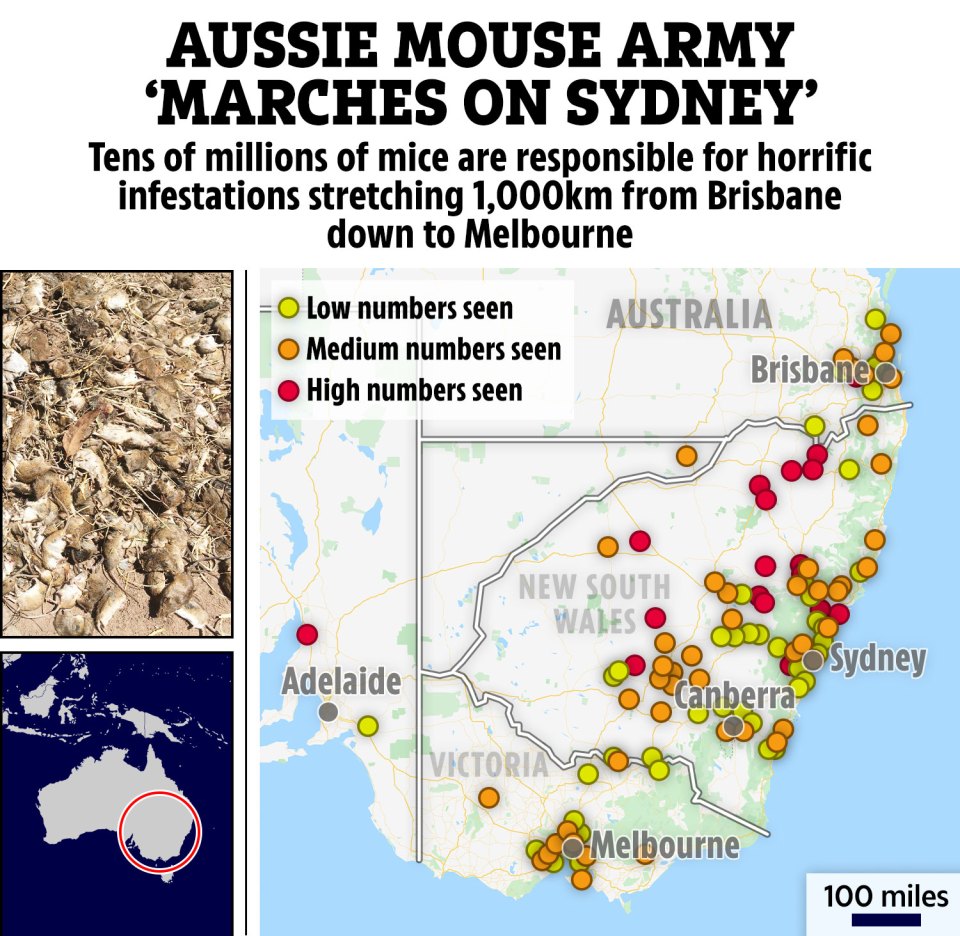 But the state has offered to provide it for free if the Australian Pesticides and Veterinary Medicines Authority approves it.

Bromadiolone kills rats and mice by preventing the blood from clotting and can be lethal from one day of eating the poison, according to the National Pesticide Information Center.

Announcing the measure as part of a $50million package to curb the outbreak, Agriculture Minister Adam Marshall said the poison would be “the equivalent of napalming mice” across the affected regions.

Napalm was developed for the United States Chemical Warfare Service in 1942 in a secret lab at Harvard University.

The firebomb fuel gel mixture became a key element of US military action during the Vietnam War.

Mice scurry around stored grain on a farm near Tottenham, Australia[/caption]

Some Australian farmers are concerned about the possible effect of bromadiolone on their livestock.

And environmentalists have warned the toxin will likely kill animals that prey on mice like eagles, snakes and owls.

The plague of rodents have caused untold damage to Australia’s eastern coast, decimating crops and chomping their way through food storage units.

The mice have also invaded homes, schools and hospitals as they thrive after heavy rain and hot and dry spells led to a bumper harvest.

One family in New South Wales lost their home after mice chewed through their wiring, causing a house fire.

A government-funded MouseAlert website shows mouse sightings have doubled since March – with a surge in cases in and around Sydney.

Channel 10 News Sydney claimed the mice could now be “marching towards” Australia’s biggest city to “invade” by August.

Farmers have been sharing images and viral videos showing mice pouring out of grain feeders and storage plants.

One video previously published by the Sun Online showed mice pouring out of a silo as workers tried to clean it out.

The horror footage was shared on Twitter by ABC reporter Lucy Thackray, who said it started “raining mice”.

How lottery winners became ‘cursed’ after getting millions but ending up penniless, left by loved ones and even jailed