BRITAIN’S third wave is expected to peak in August with “challenging weeks ahead,” ministers said today.

Robert Jenrick warned that Covid infection won’t peak until later in the year – despite the fact the majority of Brits will be double-jabbed by September.

This comes as cases and hospitalisations continue to surge – with more than 100,000 daily infections expected in the summer months.

The Housing, Communities and Local Government minister told Sky News this morning: “I would urge people to ensure they have the NHS app on their phones. We’re actually seeing more people download the app than ever before.

“The evidence is positive, but if you do get contacted by track and Trace, please follow all the steps required.

“It is a really important part of our toolkit for tackling the virus at this critical stage as cases are still rising, hospitalizations are increasing.

“We won’t really expect this wave of the virus to peak until late August, maybe even early September so there are going to be some quite challenging weeks ahead.”

Mr Jenrick defended the decision to go ahead with lockdown lifting in England on Monday.

“We will all need to exercise good judgement,” he said.

“We are moving from that time when the state told you what to do, things were mandated as a matter of law, to one which had to come at some point where we trusted people, we trusted businesses and organisations, and gave them the information they needed to make good judgments.”

This comes amid Britain’s ‘Pingdemic’ – which has brought services to their knees with staff having to isolate after receiving a notification from the NHS.

This means a staggering two million Brits are now thought to be stuck at home – with a further four million expected to be pinged as Freedom Day beckons.

Testing labs have been swamped as vast numbers are advised to get checked, meaning vital PCR tests are not available in some areas.

Boris Johnson and Rishi Sunak have been ‘pinged’ by NHS Test and Trace after coming into contact with Covid-positive Sajid Javid.

The Prime Minister and Chancellor initially said they WOULDN’T have to self-isolate because they are participating in a “daily contact testing pilot.”

However, in a major U-turn and following public outcry both said this morning that they would isolate – just like every Brit who has been ‘pinged’ by the NHS app.

The Health Secretary yesterday revealed he had returned a positive lateral flow and PCR test for the bug – but his symptoms are “mild” as he has been double-vaccinated.

Officials were scrambling to work out precisely who had been in close contact with Mr Javid in the past few days.

The Health Secretary was seen leaving Downing Street yesterday before the announcement – fuelling speculation that the PM and other cabinet ministers would be ‘pinged.’

And as expected, Mr Javid’s list included Boris Johnson and Rishi Sunak – who have now been contacted by NHS Test and Trace.

Initially, it was said they would be skipping self-isolation – as the ‘pilot’ scheme would have allowed them to continue working from Downing Street while taking daily Covid tests.

The pilot covers a variety of selected organisations – including Downing Street and 20 other firms, including Network Rail, TFL, Heathrow and Border Force.

This is the same testing scheme that allowed Cabinet minister Michael Gove to skip self-isolation after returning from watching the Champions League final in Portugal.

In terms of the vaccine rollout, all adults have been offered a dose.

Sajid Javid announced today: “Every adult in the UK has now been offered their first dose of the vaccine.

“A phenomenal national effort. Please come forward for your jab if you haven’t already – it protects you and your loved ones.”

Yesterday, Jeremy Hunt warned that lockdown restrictions will have to be reimposed if Covid hospitalisations exceed the daily peak of the first wave.

The former Health Secretary said the situation was “very serious” and the Government would face “difficult decisions” in the months ahead as cases rise.

Mr Hunt, who is now chairman of the Commons Health and Social Care Committee, told BBC Radio 4: “The warning light on the NHS dashboard is not flashing amber, it is flashing red.

“I think coming into September we are almost certainly going to see infections reach a new daily peak going above the 68,000 daily level, which was the previous daily record in January.

“If they are still going up as the schools are coming back I think we are going to have to reconsider some very difficult decisions.

“How we behave over the next few weeks will have a material difference.”

Mr Hunt’s warning comes as NHS leaders warned that an uptick in hospital admissions could hamper their ability to deal with the backlog in care – with some 5.3 million Brits now awaiting treatment.

One of England’s largest hospitals yesterday cancelled all its planned operations for 48 hours due to a lack of beds in intensive care amid a concerning rise in Covid admissions.

University Hospitals Birmingham (UHB) NHS Trust, which has more than 1,100 beds, has put dozens of procedures scheduled on hold – including lifesaving liver transplants. 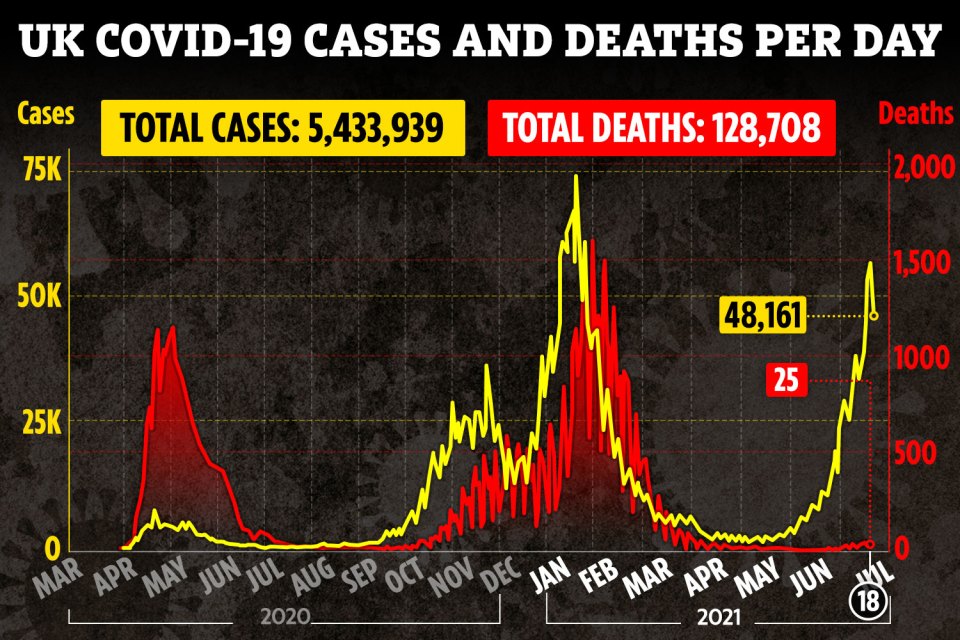 This wave may not peak until September[/caption]