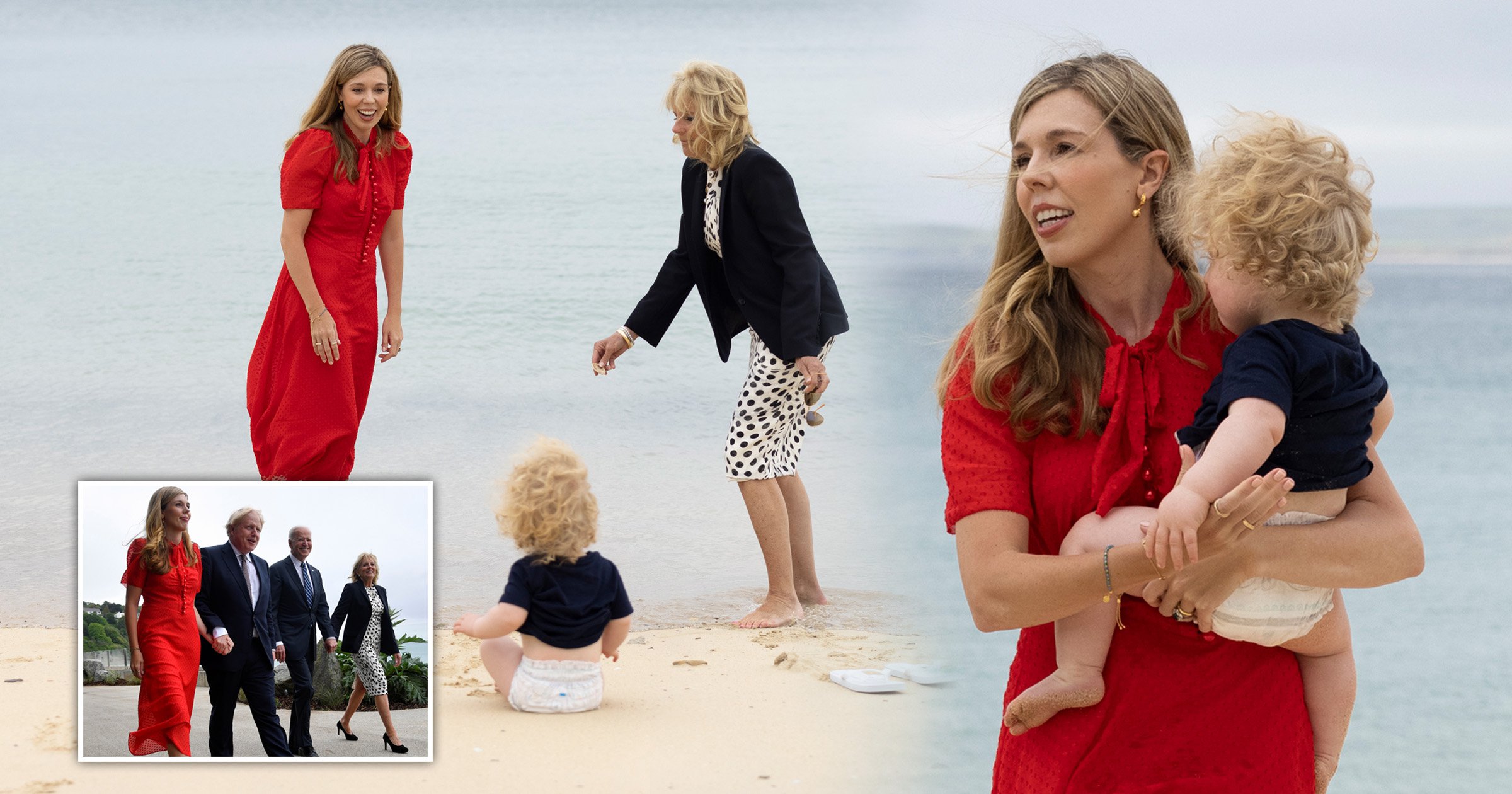 First Lady Jill Biden has been enjoying the Cornish seaside, kicking her shoes off for a paddle with Carrie Johnson and her son Wilfred.

The three were all barefoot to step in the sea ahead of the G7 summit in Carbis Bay tomorrow which Joe Biden will join as part of his first official overseas visit as US president.

Baby Wilfred is making an impact on the world stage early, aged only one year old.

His face was turned away in the images, released by Downing Street this afternoon, as his parents do not want him to be a ‘public figure’.

Boris Johnson, who married wife Carrie last month in a secret ceremony, said initial talks with the US president were ‘great’ and dealing with him was ‘a breath of fresh air’.

He told reporters: ‘It’s wonderful to listen to the Biden administration and Joe Biden because there’s so much that they want to do together with us – on security, on Nato, to climate change.

The US president arrived in England yesterday on Air Force One ready for the talks, which will include topics such as the coronavirus pandemic, worldwide vaccinations and climate change.

Speaking outside the Tregenna Castle hotel in St Ives today, he said the US would ‘help lead the world out of this pandemic’ alongside other G7 countries.

He said Boris Johnson had led a ‘strong campaign to get people vaccinated across the UK’.

However, it has not just been pats on the back, as the US president has concerns over Brexit, especially the situation in Northern Ireland.

Boris Johnson said he was ‘optimistic’ the peace process would be kept going.

He said: ‘What I can say is that America – the United States, Washington – the UK plus the European Union have one thing we absolutely all want to do and that is to uphold the Belfast Good Friday Agreement and make sure we keep the balance of the peace process going.

‘That’s absolutely common ground and I’m optimistic that we can do that.’

Mr Biden’s first overseas visit has provided the US President with the opportunity to repair some of the international relations damaged by predecessor Donald Trump.

Mr Johnson said: ‘It’s wonderful to listen to the Biden administration and Joe Biden because there’s so much that they want to do together with us – on security, on Nato, to climate change.’

Andrew Neil: ‘Piers Morgan has a different idea of what he’s worth to GB News’

Swansea riots: Teen boy, 16, and four men arrested after cars set on fire and houses pelted with bricks in vigil