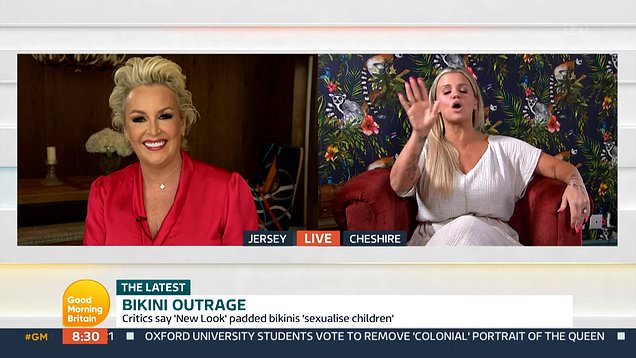 Kerry Katona clashed in a big way with Real Housewives of Jersey star Tessa Hartmann who claimed her children take pictures of her naked.

The Atomic Kitten star joined OnlyFans last year, saying she wanted to be ‘in control’ of her glamour shoots.

She joined Tessa on Wednesday’s Good Morning Britain to debate whether the padded bikini tops being marketed for girls as young as nine were ‘sexualising’ children.

Kerry was fiercely against the product while Tessa felt it was a ‘good thing for a body-conscious teenage girl’.

Things became heated when Tessa brought up Kerry’s content online and implied she was not being a ‘role model’ by slamming the bikini top while getting her children to take racy photos.

She said: ‘You get your teenage daughters to take the photos of your naked pictures and put it on your social media site yet you wouldn’t let them wear the bikini that covers their modesty?’

‘My children take pictures of me in a bikini or in my underwear. I’m a 40-year-old darling. That is an over-18 site sweetheart.

Kerry insisted that it was ‘not a sore point at all’ as host Richard Madeley tried to bring some order back to the discussion.

The Whole Again singer said she was ‘gobsmacked’ by the clothing, adding: ‘Children need to be children and that is it. Are we going to start putting padded trunks for boys next at age nine? The world’s gone mad!’

MORE : Friends Reunion director responds to backlash over lack of diversity in special: ‘What more do you want?’