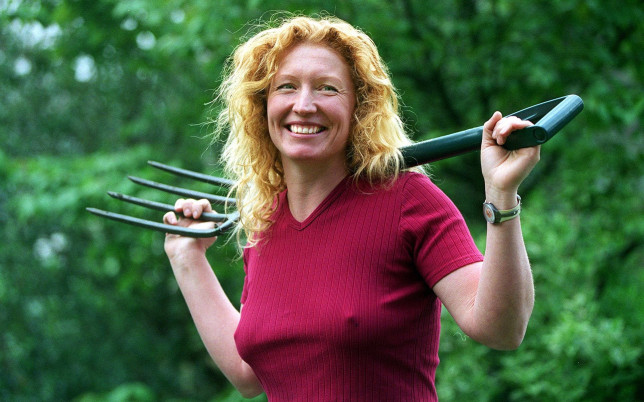 Charlie – who was as famous for not wearing a bra as she was for her gardening skills – specialised in water features on the programme in the late 90s and early 2000s.

The green-thumbed presenter would landscape backyards with Alan Titchmarsh and Tommy Walsh.

Now, 16 years after the gardening show ended, Charlie has shared the advice she received from Esther.

‘The TV presenter Esther Rantzen said to me, “You’ll be labelled the braless one for the rest of your life”,’ Charlie told The Independent.

‘Ground Force was a long time ago, and I have to say, even now, people will bring it up. It is very silly.’

She went on to say that the reason she decided to go braless was simply due to comfort.

‘It was always just for comfort. If you’re swinging a sledgehammer, you want to be comfortable! People say, “Why don’t you wear a sports bra?” But those are not the comfiest things in the world,’ she said.

This isn’t the first time Charlie has spoken about why she opted to go braless.

Back in 1996, Charlie told The Mirror that while she would occasionally put a bra on after work, she simply ‘cannot abide tight knickers’.

‘I only wear underwear if I have to get undressed in front of someone. So no bra. And no knickers either. But if I do wear knickers, they’re sort of Marks and Sparks 12-14s, because I cannot abide tight knickers,’ she revealed.

‘I find thongs quite uncomfortable as well. So I’m better without knickers altogether.’

Ground Force was watched by millions every episode in its heyday – attracting a peak audience of 12 million. It aired from 1997 to 2005.

MORE : How to care for your garden in a heatwave

MORE : Brad McClelland finds long lost sister after she spotted him on Love Island: ‘I found love in a different way’

GPs ‘sending back Covid jabs because there isn’t enough demand’

Brad has used the same chat up line to woo THREE of the girls in the villa, claim Love Island fans