UK COVID cases have soared by two thirds in just a week as 5,683 more people test positive in the last 24 hours.

The latest number of cases brings the total number of infections since the pandemic began to 4,522,476. 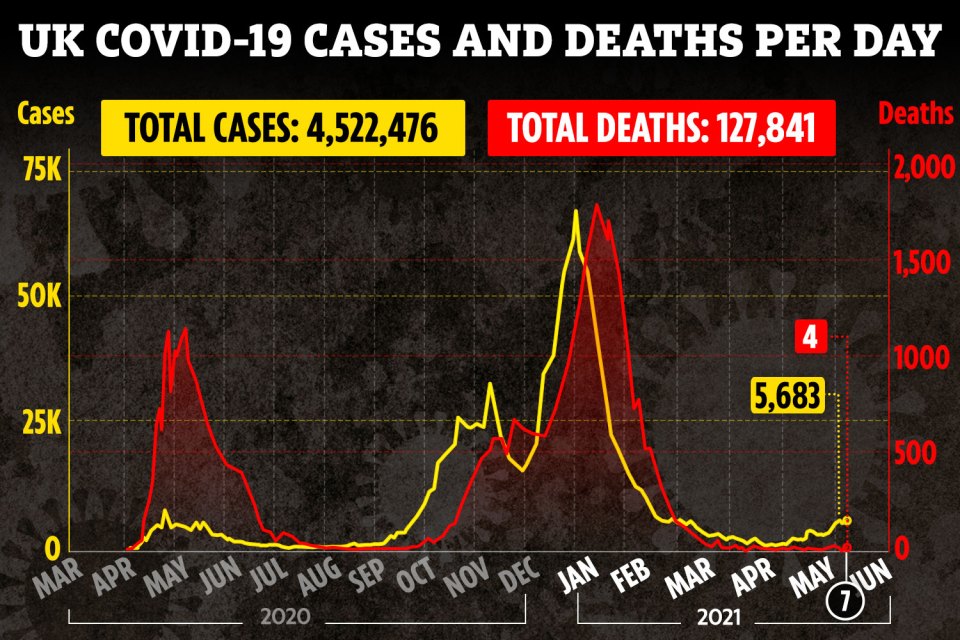 One further death has also been reported with the total now at 127,841.

Today’s cases are up from last Monday when 3,383 new infections were recorded.

This means cases are up two thirds since seven days ago.

The figures also show a total of 67,381,870 vaccinations have been adminstered.

It comes as three million people in their 20s will be able to book their coronavirus vaccine from tomorrow, Matt Hancock has announced.

The NHS England Covid vaccine booking site will open to those aged between 25 and 29 from 7am Tuesday.

The Health Secretary Mr Hancock told MPs in the House of Commons this afternoon: “I’m delighted to be able to tell the House that from this week we will start offering vaccinations to people under 30, bringing us ever closer to the goal of offering a vaccine to all adults in the UK by the end of next month.

“From tomorrow morning, we will open up vaccination to people aged 25 to 29.

“Over the remainder of this week, the NHS will send texts to people in this age groups, and of course GPs will be inviting people on their lists to come forward.”

The NHS hailed the “home straight” of the biggest vaccination programme in its history.

It comes less than two weeks after those aged 30 and over became eligble as the jabbing campaign speeds ahead.

Nearly 77 per cent of adults in the UK have now had their initial shot and more than half (52.5 per cent) have had two.