COVID deaths have soared by 60 per cent in a week with another 73 people reported dead in the past 24 hours.

Another 44,104 new Covid cases were reported today, up four per cent from the 42,302 reported last Wednesday. 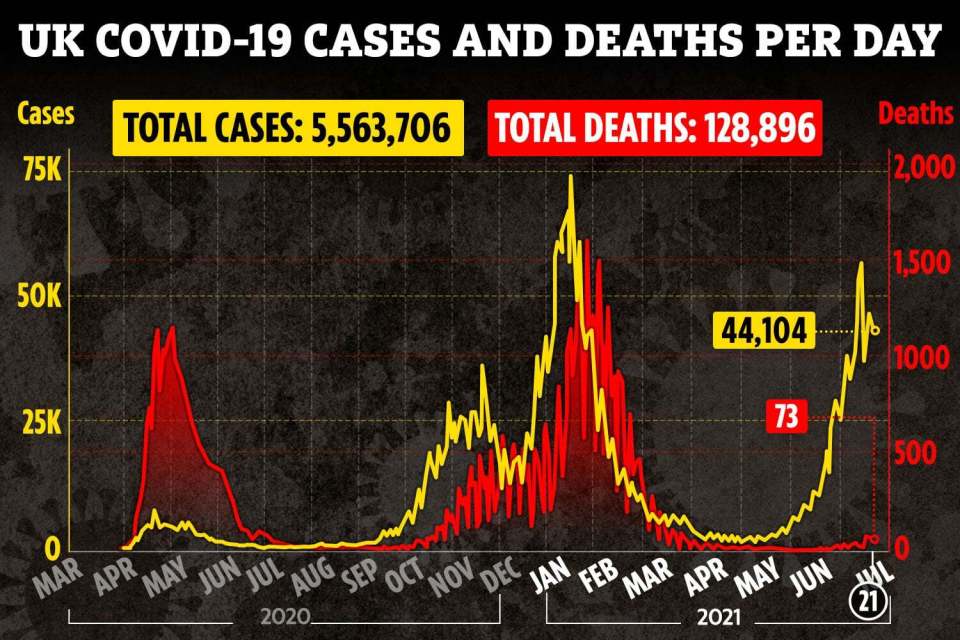 The figure is down from yesterday’s tally when 46,558 tested positive for the virus.

Hospitalisations have risen almost 40 per cent in a week, with 747 new patients.

There are 4,658 patients in hospital as of July 14, the latest date available for government data.

Today’s reported deaths brings the total so far during the pandemic to to 128,896.

DEATHS UP BY TWO THIRDS

Another 39,035 Brits received their first vaccination dose, with 161,279 receiving their second jab.

Almost 70 per cent of adults have had both jabs, with 88 per cent receiving their first.

The vaccine rollout means Brits who catch Covid now are time less likely to die than in the second wave.

They are also four times less likely to be admitted to hospital.

It comes as Labour leader Sir Keir Starmer was forced to self-isolate after one of his children tested positive.

The Labour leader tested negative this morning ahead of his weekly Westminster showdown with the PM, who is also in quarantine.

Sage scientists think the country might see a return to form of lockdown, as they urge ministers to take action.

The advisers have said Boris Johnson needs to be ready to stop the NHS being overwhelmed by the end of July, reports the i.

Grim models suggest between 1,000 and 2,000 daily hospitalisations and 100-200 deaths a day could happen by the peak, expected at the end of August. 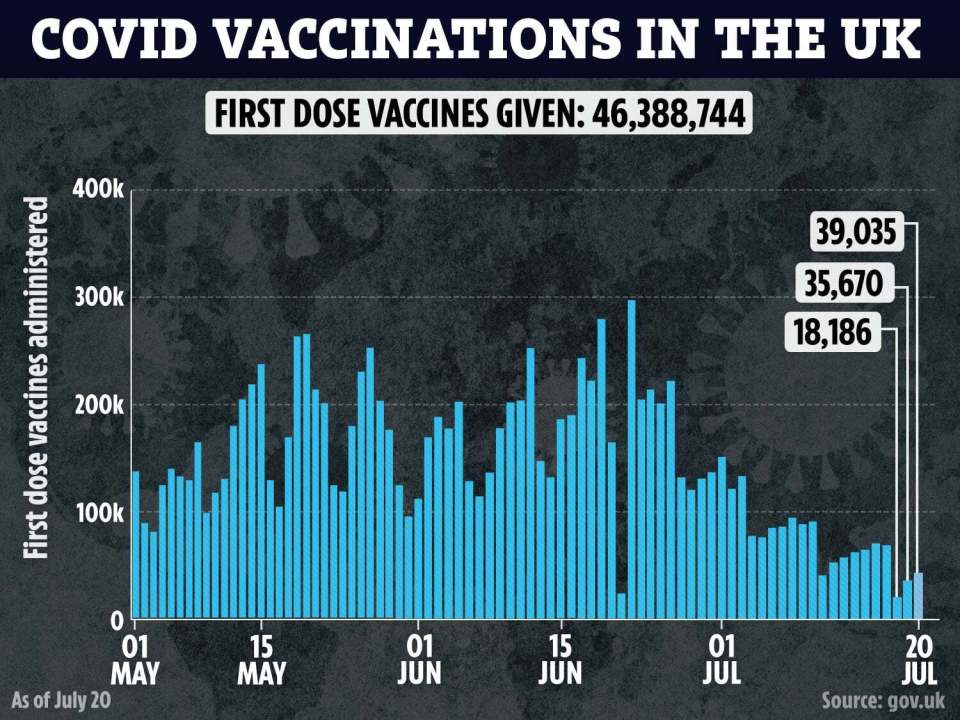 The latest data from July 14 showed there were 745 new patients admitted a day, a week before “Freedom Day”, with 4,500 people going into hospital int he last seven days.

On Monday, Boris Johnson poured a bucket of caution over Freedom Day – and warned the pandemic “is far from over”.

In a stern address from his Chequers quarantine, the PM begged Brits not to go crazy despite today’s big bang unlocking and continue isolating if pinged.

The Government expects cases to soar as the restraints are flung off but is banking on vaccines keeping hospitalisations and deaths right down.

The PM said: “There comes a point when restrictions no longer prevent hospitalisations and deaths, but simply delay the inevitable.

“And so we have to ask ourselves the question: if not now, when?”

But he refused to rule out slamming back measures if the third wave spirals out of control, insisting he has to be “humble in the face of nature”.

Mr Johnson said: “The roadmap is we hope irreversible. But we can’t guarantee that something could obviously happen that changes are our calculations.”

'Time traveller' claims to have visited 2027 and films 'human extinction'

It comes as a Sun prove found a third of Covid testincapacity is unused despite fears the system is buckling.

Waits for results are getting longer and staff claim precious supplies are being shuttled between sites.

But labs are running at only 70 per cent, according to latest Department of Health data.