COVID super-variants could take the pandemic back to square one and lead to 2020 all over again, scientists have warned.

Fears loom over the ever-mutating virus as the world desperately tries to emerge from over a year of hardship as it unlocks and vaccinates.

Six scientists, doctors and experts penned a dire warning in an essay for Foreign Affairs titled “The Forever Virus” as they warned Covid is “not going away” and herd immunity is “unreachable”.

Many countries do not have enough vaccines and those that do have too many people are refusing to get jabbed they warned.

Vaccine imbalance may lead to the emergence of even more transmissible and resistant variants of the virus which may even be able to dodge tests.

“Such supervariants could bring the world back to square one. It might be 2020 all over again,” the scientists warned.

They added: “The virus is here to stay. The question is, What do we need to do to ensure that we are, too?”

It comes as it was warned countries will never be safe from the virus until rampant outbreaks worldwide are stamped out and more people are jabbed.

So far more than 3.7million people have been killed by the virus, and almost 175million have been infected.

And despite efforts by many countries to jab their way out of the pandemic, the virus continues to surge with 2.8million new cases worldwide in the last week.

India, Brazil, Argentina, Colombia and the US recorded the highest number of cases in the last seven days – and the UK has seen a 61% increase in its total cases in that same period.

The scientists warned the chance has been lost to ensure Covid was a “short crisis” and branded the international response to the virus as “surprisingly inept” as “politics undermined public health”.

And while the rapid development of vaccines was a victory, the stockpiling of the jabs by wealth countries could see poorer nations not reach immunisation levels needed until 2023.

With this being a global crisis, a rampant outbreak in one of these unvaccinated nations could spawn variants which may then cross borders and start the cycle all over again. 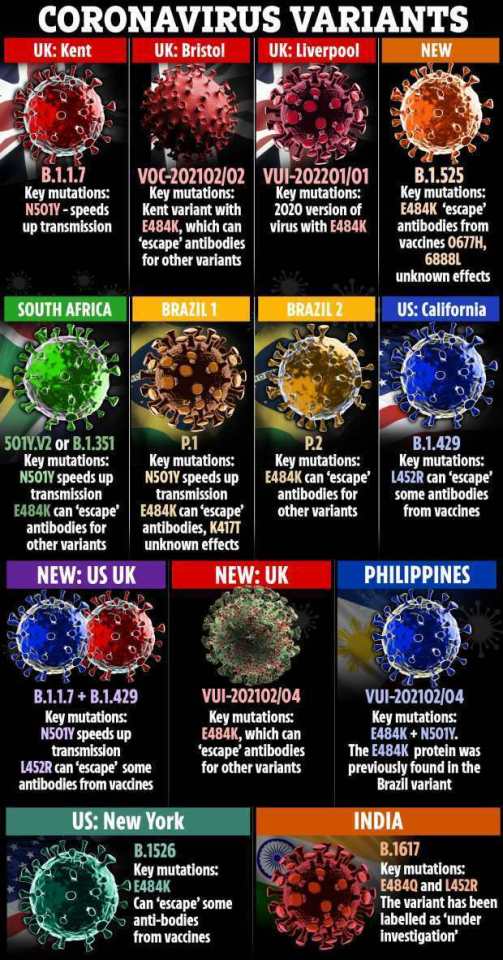 “It is becoming clear that the world cannot wait for herd immunity to contain the pandemic,” the essay argued.

Slow global vaccinations and a “sizable” movement of anti-vaxxers is threatening to scupper the progress that has been made, they warned.

And with the rampant outbreaks spawning variants, it just adds to the vaccine arms race as booster shots have to be developed to ensure the virus cannot beat the jab.

The essay calls for the US to lead the fight and “recover its reputation for global public health leadership” to help foster cooperation in overcoming Covid.

It argues if the US can suppress its own outbreak, it can provide a blueprint which can be used to beat the virus worldwide.

More accurate detection methods for the virus are needed as public health officials must act like “battlefield commanders” to suppress outbreaks.

And the team argue for a “system reboot” to reform the global pandemic response and create a united front against the virus.

All these steps should be taken as Covid “is not yet the worst pandemic history. But we should not tempt fate”, they warned. 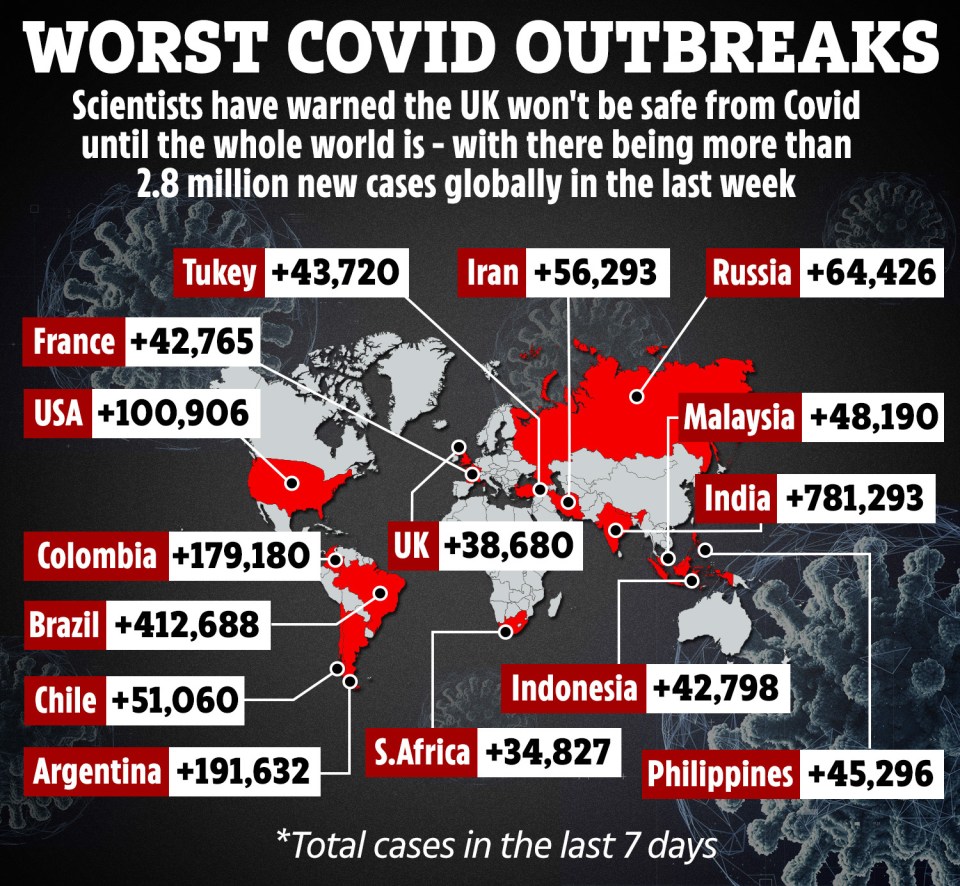 Previously, The People’s Vaccine Alliance (PVA) – a global coalition of 50 organizations – told The Sun Online about the critical danger the new strains pose if more support isn’t given to help vaccinate people worldwide.

“This failure puts us all at risk,” Anna Marriott, health policy manager at Oxfam, told The Sun Online.

New mutations on the coronavirus can make it harder for the body’s immune system, which has been primed to look out for the “original” strain either through vaccination or prior infection, to recognise it.

Antibodies – proteins produced by the immune system to fight the virus – may be weaker against new strains.

The threat of new coronavirus strains also means masks and social distancing could be needed for years to come, despite the vaccine rollout, and it is not clear when border controls will be relaxed.

And its feared should a new variant take hold, further lockdowns may needed to clamp down and stop the spread. 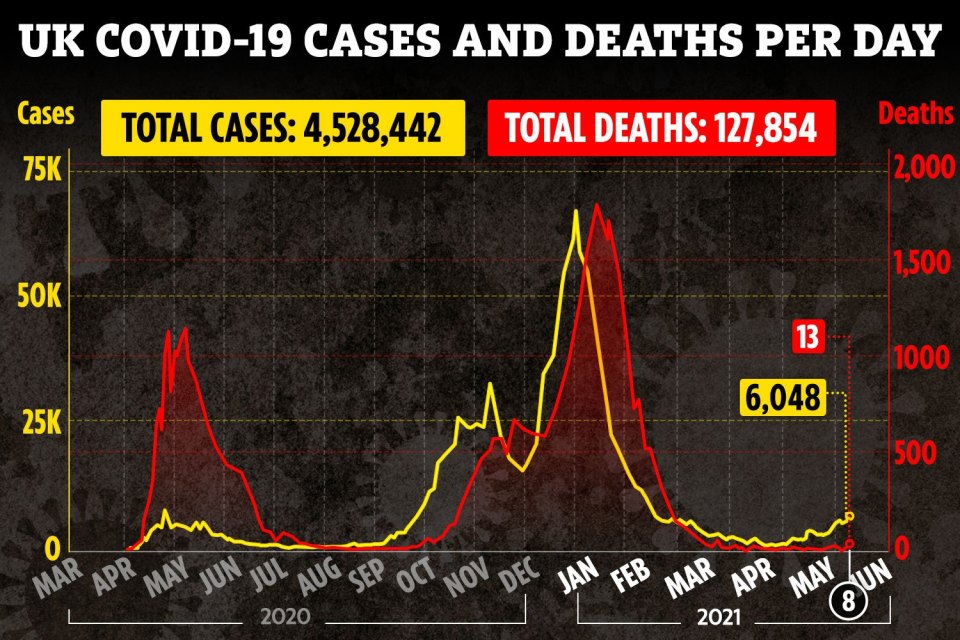 Britain’s so-called “Freedom Day” on June 21 – when all Covid restrictions will be officially lifted – currently hangs in the balance amid fears over variants and rising case figures.

Prime Minister Boris Johnson has been urged to press ahead with his plan, despite Chancellor Rishi Sunak reportedly being “willing” to delay June 21 by four weeks.

Despite spiking cases, the latest figures showed that hospital admissions have actually fallen in the last seven days compared to the previous week – in a boost for the PM’s roadmap.

Johnson is due to reveal on Monday whether he will proceed as planned – and it is understood he could delay making the decision until as late as Sunday night.

The Government could postpone Freedom Day until end of July after scientists presented Cabinet Ministers with a “downbeat” briefing on the Indian variants amid spiking cases.

Cases have risen from lows of under 2,000 in May to creep up to around 6,000 – but the numbers are still in their lowest phase since last September.

Britain’s vaccination drive also continues as yesterday people aged between 25 and 29 were told they could get the jab.

Health Secretary Matt Hancock said on Tuesday there was a “challenging decision” to be made over the further lifting of Covid restrictions on June 21.