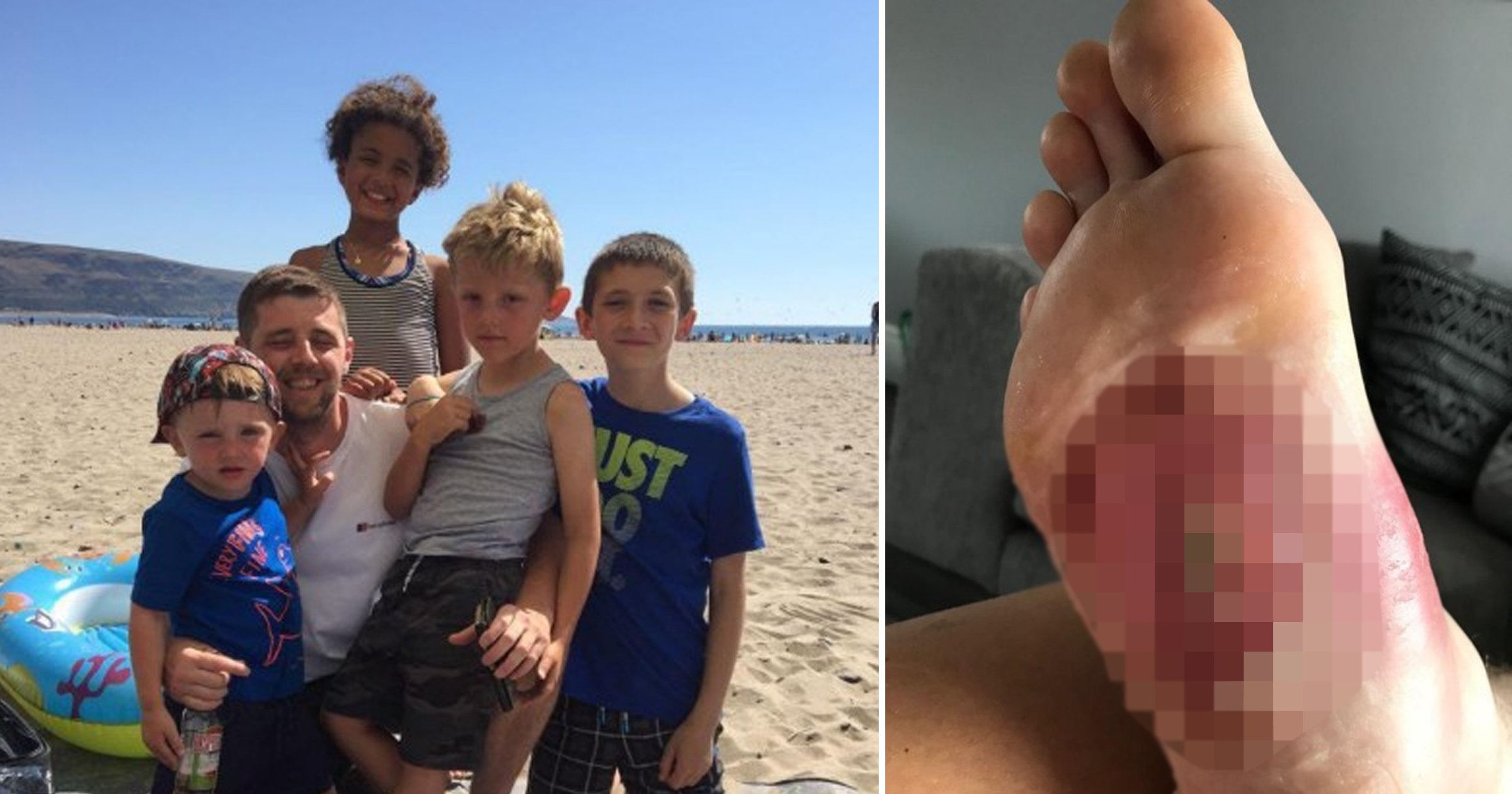 A dad was hospitalised with fourth degree burns after he stepped on sand that had been heated up by a disposable barbecue.

Danny Howard, 33, said he was left in ‘the most excruciating pain of his life’ as the heat ‘melted’ his skin.

He and his wife and six children had been spending the day on Barmouth Beach in Wales after making a spur-of-the-moment trip from their home in Chester because the weather was so nice on May 30.

They used two disposable barbecues to cook burgers, sausages and hotdogs and, when they were done, Danny decided to move them out of harm’s way.

Though the barbecue trays – which had been burning for about 45 minutes – were cold by the time he moved them, Danny said that all of the heat of the coal had been transferred to the sand.

When his foot sank about half an inch deep, he said the temperature ‘absolutely melted’ the skin on his sole and blistered between his toes.

Recalling the agonising pain, Danny said: ‘On a scale of one to ten, I’d put it at 25.

‘I’ve got second, third and fourth degree burns all around the bottom of my foot.

‘Sand is just like glass at the end of the day, so it’s just going to absorb all of the heat. I don’t know how far that heat will travel down into the sand, but it’s quite a good insulator and it was a really hot day as well, so there was probably no escape for the heat.’

The self-employed plasterer had to hobble to his van and even drove his children two hours back home using ‘only his big toe’ before taking himself to hospital.

Medics cut away a big blister that had formed and he was sent home with ibuprofen and paracetamol.

But, after suffering more ‘unbearable’ pain, Danny returned to A&E the next day where doctors discovered a hole had developed in his foot.

He was transferred to a burns specialist unit where they gave him more powerful pain relief and advised him to stay overnight due to the risk of infection.

But Danny needed to be at home to look after his children so he was given stronger antibiotics and left hospital to continue his recovery.

A week later, while the reddening has subsided, he’s still in ‘agonising pain’ and is unable to walk. He fears his foot will ‘never be the same again.’

Danny’s accident comes after it was reported last week that a nine-year-old boy’s foot ‘melted like wax’ in the exact same scenario.

Will Tyler, from Stockport, needed a skin graft after he stepped on hot sand where his parents had set up a disposable barbecue.

Danny wants to raise awareness of the dangers of such barbecues on beaches, especially if young children are around.

‘I’ve got an 18-month-year-old, a four-year-old, a five-year-old and I thought if one of them had touched it it would have just obliterated their feet,’ he said.

While he is aware of the dangers of using a barbecue, he did not expect that amount of heat to come from the sand.

‘It’s not something you consider a risk. You think the children are more at risk from falling onto it and stepping onto it – that’s what you tend to look out for,’ he said.

Danny predicts the sand would have remained scorching hot for another few hours after they’d left.

‘If I’d never stood on the sand and I’d packed up my barbecue and gone away, somebody could have walked across that spot five minutes with their dog or a small kid and nobody would have known. You can’t even tell the sand is hot,’ he said.

He’s called for a system whereby people leave little flags in the ground to let people know if they’ve used a barbecue recently.

Covid certificates ‘could be edited’ by anyone in ‘worrying’ security glitch