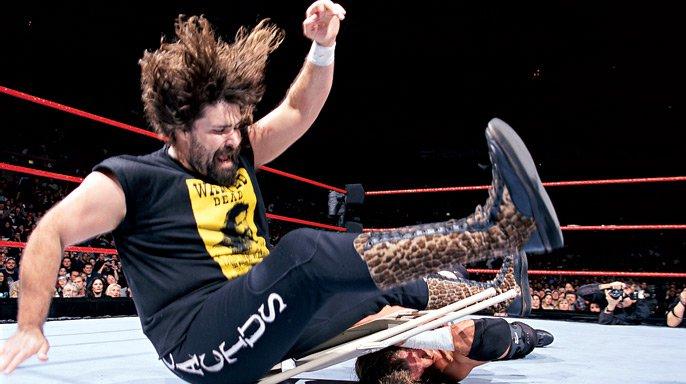 WWE legend Mick Foley has recalled stepping into the ring with Dynamite Kid and having his jaw dislocated in the middle of the match.

At that time, the future Hall of Famer was working as Jack Foley and was wrestling only his second ever match against the late wrestler – real name Tom Billington – and his British Bulldogs tag team partner Davey Hart Smith.

In this week’s episode of Dark Side of the Ring, Dynamite Kid’s family and peers – as well as Dave Meltzer – break down his life and work, including how steroid abuse, injuries, painkillers and depression meant he hit rock bottom.

Reflecting on their match, Foley said: ‘He was a product of the Snake Pit in Wigan, guys who really knew how to hurt you in a hurry. I don’t know for a fact but I’m assuming that Tommy had the crap beat out of him.

‘And I think it created him a resiliency and also maybe a little bit of bitterness to people who hadn’t endured what he had to make it through. I found that out first hand.’

The match saw a young, experienced star then going by the name Jack Foley teaming up with Les Thornton against the Bulldogs, and things didn’t go to plan.

The Hardcore Legend explained: ‘I showed up in Providence, Rhode Island with all of one match to my credit. It’s me and Les Thornton against the British Bulldogs. I was excited, I’m in the ring with one of my heroes, Tommy.

‘I came in and I got a very, very quick education. Dynamite starts shaking the ropes like he couldn’t wait to get in, and when he was tagged in, he sent me into the ropes and he didn’t so much clothesline as club me with his bicep in the jaw.

‘And that was the last time I ate solid food for three weeks. I didn’t know at the time, but he had dislocated my jaw. I almost lost my career because of that.’

Despite the painful incident, Foley revealed he still showed his fellow wrestlers respect after the bout.

He added: ‘There were no hard feelings. I said, “It was such an honour being in there with you guys”, shook their hands, went back to my hotel room and threw up in the toilet.’

The former world champion – who has wrestled as Mankind, Cactus Jack and Dude Love during his influential career – went onto suffer a lot of pain in the name of entertainment over the decades.

Last year, he opened up on the lasting physical and financial impact of his legendary Hell In A Cell match with The Undertaker at King of the Ring back in 1998.

He exclusively told Metro.co.uk: ‘Yeah, I would say Hell In A Cell – I think it may have shortened my career. It was definitely the point from which I believed in my own mortality, so everything was different following that cell match.

‘I don’t have any regrets – I have some small regrets about things I did later in my career. But no, I don’t regret starting that match on top of the cell.’

The match itself was full of memorable moments, including Foley – wrestling as Mankind – being thrown off the towering cell, and slammed through the roof to the mat far below.

‘Things did not work out like I’d have hoped,’ he admitted. ‘The cell collapsing when I was chokeslammed still has fallout for me!

Dark Side of the Ring airs on Vice TV. The first two series are available on All 4.

Where are Coronation Street’s Baldwin family now? From Dancing on Ice to horror accidents

Stacey Solomon says she burns 1,000 calories during romps with fiancé Joe Swash – despite being in missionary position

Cara Delevingne is auctioning off an NFT about her vagina