SHAMED Martin Bashir looks keen to avoid being recognised yesterday as he is seen out for the first time since the bombshell report into his Princess Diana interview.

The former Panorama journalist, 58, hid under a cap as he walked to his Mercedes outside his £1.7million home in Hampshire.

Lord Dyson’s report found he used fake documents to get his 1995 BBC scoop.

The BBC apologised and admitted it had taken “far too long to get to the truth” ­ as it pledged to return awards it won for the Panorama interview.

He commissioned fake bank statements to persuade her that officials were being paid by MI5 and the media for information about her.

He showed them to her brother, Earl Spencer, to win his trust. The Earl took notes when he and Diana met Bashir in secret for 90 minutes at a flat in London’s Knightsbridge.

Eight pages of his notepad detailed false claims that Bashir presented in a bid to help him seal the interview.

He told Diana her phone was bugged and Prince Charles was having an affair with their sons’ nanny.

He used the fake statements to persuade her MI5 were spying on her.

MPs blasted the BBC over its failings and Culture Secretary Oliver Dowden hinted the row could lead to change.

He tweeted: “We will now reflect on Lord Dyson’s thorough report and consider whether further governance reforms at the BBC are needed.”

Tory Tom Hunt said: “Serious questions now hang over whether the licence fee should continue. The BBC should hang their heads in shame.” 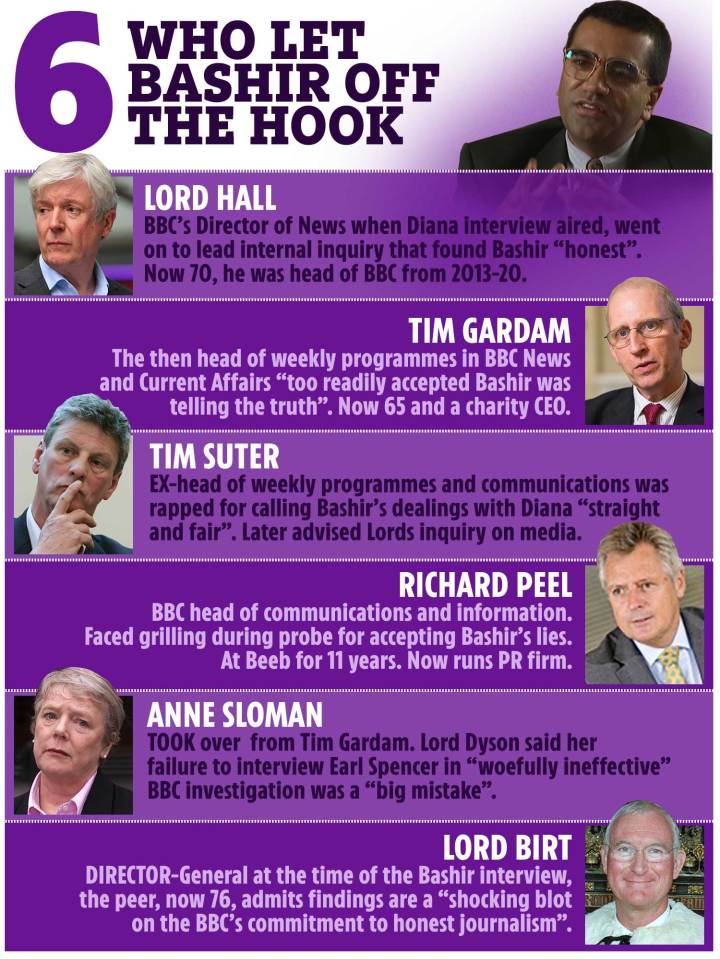 Is Harry & Meghan's choice of Lilibet a subtle insult or mean jibe?

Brit, 28, fights for life after her sister rescues her from jaws of crocodile

It was also alleged that Prince Edward had Aids and the Queen was a “comfort eater with heart problems”.

The interview, in which Diana claimed “there were three of us in this marriage” in reference to her husband’s relationship with his now wife, Camilla Parker Bowles, caused shockwaves worldwide.

Lord Hall wrote to Bashir to say he should be “very proud of your scoop” and he added: “It was the interview of the decade — if not our generation. You have changed the way we report the monarchy.”