THIS is the moment four police officers arrest a man who “zig-zagged” his car through drinkers at a Marbella terrace bar, injuring 11 of them.

The officers were filmed shouting at onlookers to “clear the way” as they cart the crazed driver face-down with this hands and legs in a firm hold to the nearest patrol car.

The arrest was captured on video[/caption]

Police overpowered and cuffed the unnamed driver, who ploughed a white Suzuki SX4 into unsuspecting drinkers at 3.15pm on Monday.

Two people were taken to hospital in Malaga while others were rushed to Marbella’s Costa del Sol Hospital.

A chef at a snack food bar who witnessed Monday’s horror said: “He careered into people sat on several tables on the pavement.”

In an update overnight, Spanish media have reported that 11 people were injured in yesterday’s crash, with two taken to intensive care in Malaga.

Police in the southern Spanish city said a car rammed into a pedestrian area filled with outdoor cafes and restaurants.

The crash took place in the mid-afternoon as the area was brimming with customers having lunch, said Raul Morote, whose family owns several restaurants on the popular avenue.

“The car was zigzagging and sweeping away everything,” Morote said.

He described seeing about a dozen people being helped on the spot by emergency crews – many of whom had blood pouring down their legs.

A chef at a snack food bar said the driver “careered into people sat on several tables on the pavement.

“Four Arab women who were on holiday in Marbella were among the injured.”

The driver was a 30-year-old Spanish citizen who was travelling in the vehicle with his parents, reports claim.

Police have not confirmed whether anyone else was in the vehicle.

Well-placed sources said the man held had passed drink and drug tests and they were investigating whether he had psychiatric problems.

Distressing images emerged showing stricken casualties being tended to by holidaymakers and workers as police cordoned off the scene.

The terrace bar is in a street called Avenida Miguel Cano near where holidaymakers start tours of Marbella in horse-drawn carriages.

Jorge Martin, manager at the Casa Blanca bar, where most of the casualties were enjoying terrace drinks and food, said: “I helped some of the injured.

“I would say anything between six and 10 people were hurt.

“I couldn’t really tell you where they came from. We’re talking cuts, broken bones and probably head injuries.

“It was a very distressing situation. I know someone has been arrested.

“But I’m not in a position at this stage to say what exactly happened and whether the driver meant to mow down people or it was an accident.”

It is believed the car crashed as people sat outside the street’s bustling bars and restaurants.

A worker at a cafe-bar, who declined to give her name, added: “The police and ambulance were at the scene very quickly

“People were screaming and shouting and there was a lot of bystanders running in every direction because at first no-one really knew what was going on and whether it was a terrorist attack.”

At first no-one really knew what was going on and whether it was a terrorist attack.

She added: “Others jumped on the driver before the police got to him and held him while back-up arrived.

“I saw an older man and woman get out of the car he was in.

“It happened around 3.15pm. The vehicle involved was a white Suzuki, I think it was a Suzuki SX4.”

Several ambulances and at least one fire engine was shown in pictures from the scene, where the car had appeared to crash into a shop front.

A spokesman for Spain’s National Police confirmed: “Officers are investigating at the scene together with town hall-employed local officers to try to clarify the causes.”

On Wednesday night, they added: “With regards to the incident this afternoon in Miguel Cano Avenue in Marbella, we can confirm the arrest of the driver of the vehicle.

“He is a Spaniard aged 30. A terrorist motive has been ruled out as the cause of the incident.

“Investigations are ongoing to clarify fully the cause.

“Around ten people have so far been recorded as injured. All are being treated at a hospital in Marbella.

Girl, one, fighting for life after being found unresponsive inside home

“Two of the casualties have been taken to another hospital in Malaga. One has considerable injuries.”

The man at the wheel of the car is believed to have tested negative in drink and drugs tests after he was removed from the scene.

Well-placed sources said cops were investigating whether he was suffering psychiatric problems.

Emergency services at the crash scene on Monday in Marbella[/caption] 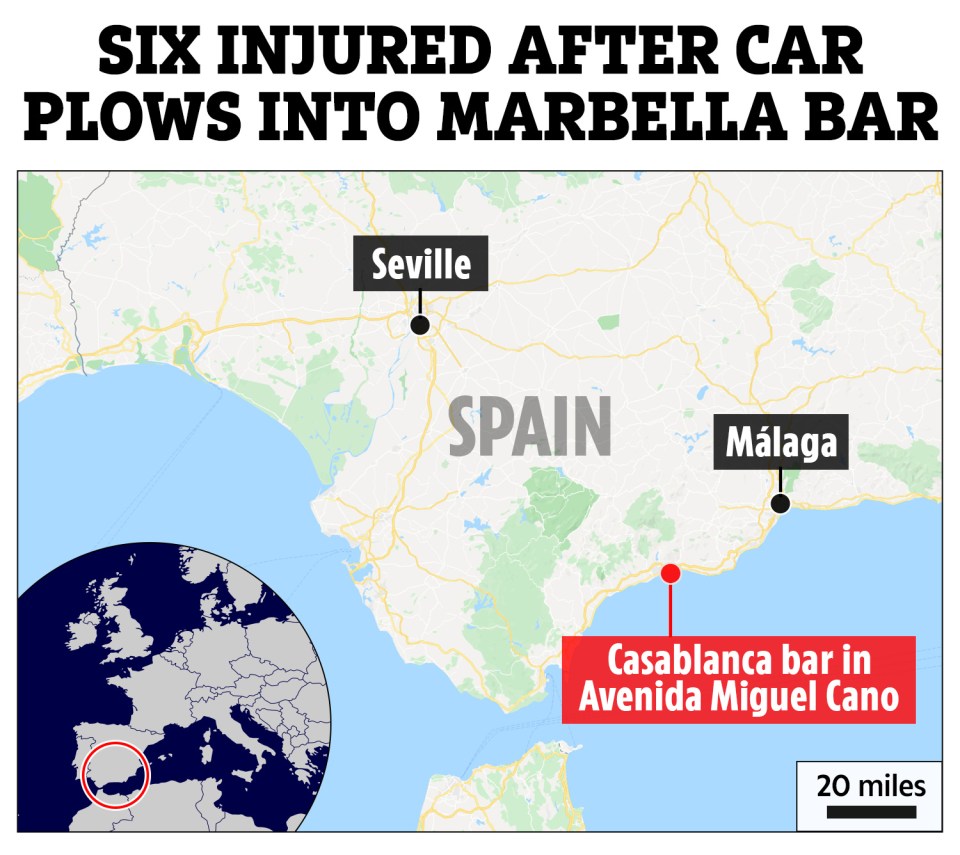 ‘It’s difficult to deal with’: Tom Kerridge facing staff shortages and forced to close one of his businesses amid Covid-19 test and trace ‘pingdemic’