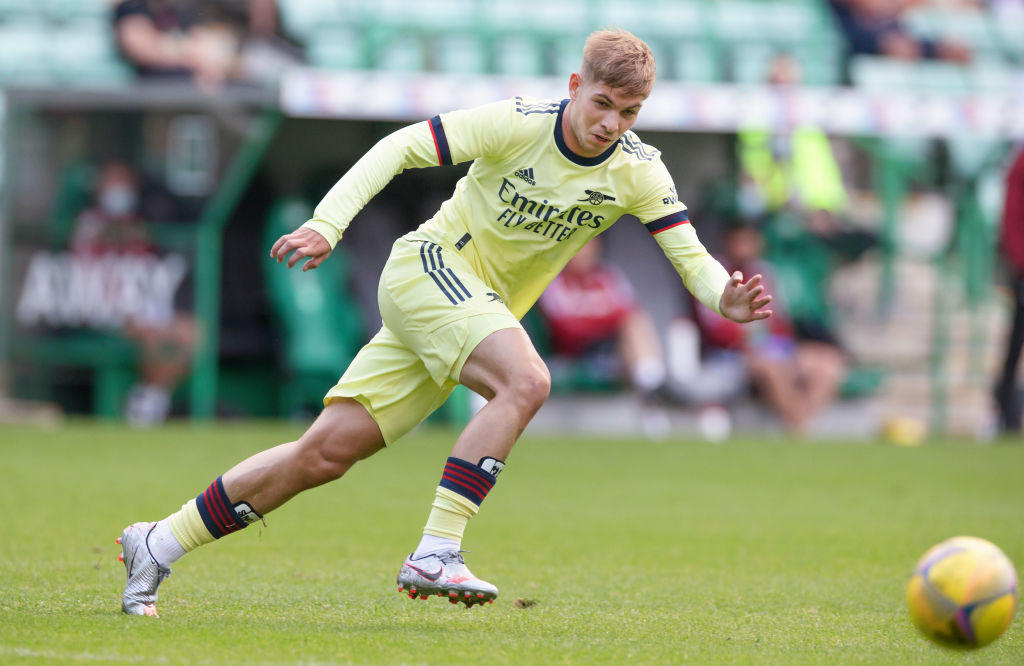 Emile Smith Rowe appears to have been handed the iconic number 10 shirt at Arsenal for the coming season, worn by the likes of Dennis Bergkamp, Paul Merson and, most recently, Mesut Ozil.

The 20-year-old became a regular face in the Arsenal first team for the first time last season, making 33 appearances in all competitions.

While the Gunners have been linked with moves for players to fill the number 10 position, it looks like it may well be Smith Rowe’s, or at least he will hold the number itself.

A fan snapped a photo with the Englishman while the first team were training in Edinburgh and Smith Rowe was sporting a tracksuit jacket with the number 10 on the front.

The squad numbers for the 2021/22 season are yet to be confirmed by the club but this appears a huge clue that Smith Rowe has ditched his previous #34 and been given a substantial upgrade.

The iconic shirt number has been vacant since Ozil left the Emirates in January, moving to Turkish side Fenerbahce where he has since made 11 appearances without scoring a goal.

Smith Rowe’s ‘promotion’ to the number 10 appears to end speculation linking him with a move to Aston Villa, after the Villains submitted two bids for the play-maker.

Bids of £25m and £30m from Villa were turned down by the Gunners and manager Mikel Arteta has said there is no question that Smith Rowe will remain with the club this season.

Asked earlier this week if he’s determined to keep Smith Rowe, Arteta replied: ‘Without a question. ‘Yes. He will stay here. 100%.’

Smith Rowe played in Arsenal’s shock 2-1 defeat to Hibs in a pre-season friendly on Tuesday and will expect to be involved again when they meet Rangers on Saturday.

Why Antonio Rudiger wears a mask for Germany at Euro 2020