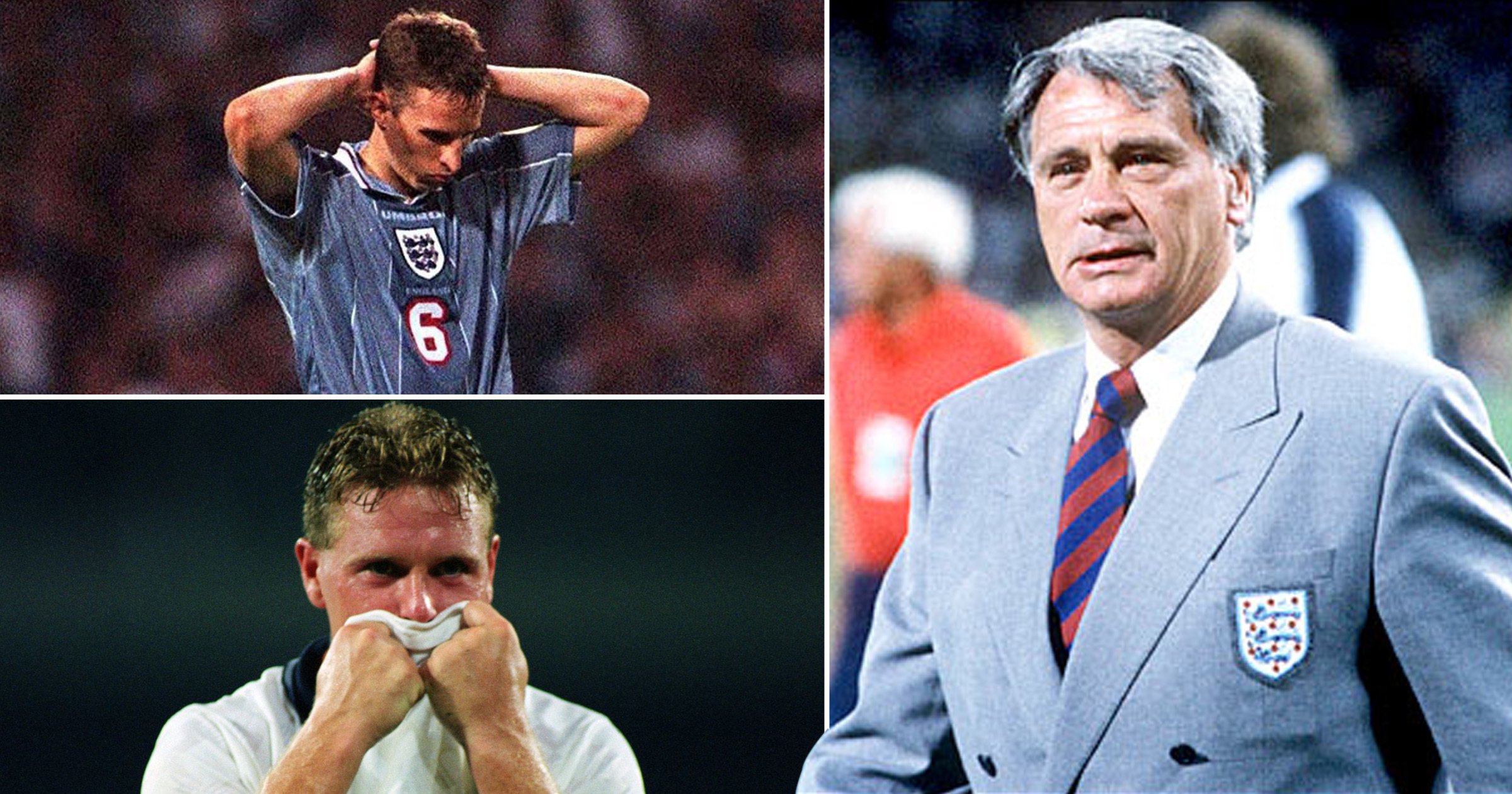 It’s a funny old game, football. And when it comes to major tournaments over the years, England fans have had to learn to laugh – if only to stop themselves from crying.

The nation has been through the wringer at World Cups and European Championships ever since 1966. They’ve been left disappointed so often in that time, in fact, it’s amazing how fans can get themselves excited to go through the rigmarole time and again.

But things could be starting to change.

After 2018 saw England reach the semi-finals of the World Cup over the course of one glorious summer, there’s growing optimism. England’s chances at the delayed Euro 2020 this month are more positive than they have been in years, and while we shouldn’t get too carried away, there’s cause for hope.

Documentaries are perfect for reminding fans about the national team’s experiences from years gone by – both good and bad – and the best ones can serve as perfect time capsules, serving up snapshots of the country at different points in history.

More importantly they can remind us why fans bother with all of this, and why the game means so much, even after tournament exits sometimes threaten to make us forget.

These are the top documentaries for England fans to watch right now, and where to find them.

One Night In Turin

Few tournaments have captured the imaginations of England fans quite like Italia 90, where the country found itself wrapped up in initial ecstasy – and then united in utter agony – more so than any tournament before it.

The man leading the charge was a young Paul Gascoigne, and this film is a wonderful retelling of how his performances made him a national icon at the age of just 23 and helped England to a place in the semi-finals of the World Cup.

The film was written by Pete Davies, who also wrote the excellent book of the same name detailing England’s heady time at the tournament, and it’s a welcome reminder one of the most unforgettable and ultimately frustrating moments English football has ever experienced.

Available to watch on Rakuten TV

While often maligned for his old-school approach to the game during his time in charge of England, this film goes some way to explain why no-one can question the integrity of Graham Taylor.

This fly-on-the-wall documentary follows the England team in the build up to their disastrous failure to qualify for the 1994 World Cup. There’s incredible access to the inner workings of the national set-up, but while the footage will bring back memories of a pretty dire period for English football, it’s what the film tells us about Taylor himself which proves so insightful.

It paints a portrait of a thoroughly likeable character thrown into a desperate situation anyone would have struggled with, and the moment when he confronts a member of the crowd shouting racist abuse at John Barnes tells you everything you need to know about the man.

The last time the Euros were played on home soil was back in 1996, when England was being swept with the kind of enthusiasm that seems to be rippling across the country this summer too.

This documentary follows one of the most talented squads England has ever produced, full of leaders and world-class talent, on their journey to the semi-finals and yet another agonising penalty defeat to Germany.

Manager Terry Venables, Gareth Southgate and Stuart Pearce all feature in this nostalgia-heavy film from ITV, which will have you humming Three Lions just in time to see the England step onto the pitch at Wembley later this month.

Bobby Robson: More Than a Manager

A moving portrait of a wonderful man, on and off the football field. This excellent 2018 film captures Bobby as one of the most twinkly-eyed characters in the history of English football, acting as national team manager from 1982-90. It follows him from his early days in the game, to reaching the top at club level, while also taking England agonisingly close to World Cup glory during Italia 90.

The likes of Alan Shearer, Terry Butcher, Sir Alex Ferguson, Jose Mourinho and Gary Lineker all feature, as well as family members Lady Elsie and Mark Robson. The way the film explores his relationship with a young Paul Gascoigne is particularly touching.

How England won the 1966 World Cup

It’s not always been doom and gloom for England. If you’re lucky enough, you might have been alive long enough to remember the last time the national side brought home the Jules Rimet Trophy in 1966.

While England fans talk about winning the World Cup all the time, clinging on to our one victorious outing all these decades later, there will be entire generations of fans who will have never seen footage of the final itself, or learned of the journey Sir Alf Ramsey’s men undertook on the way to beating West Germany. If not, this is a good place for them to start.

The film, which includes interviews with all 10 of the remaining players who were still alive in 2006 and is narrated by Sean Bean, presents a thorough look at the tournament. It’s as good a way as any for fans to reconnect with England’s solo World Cup triumph all these years on.

Take a deep dive into the life of a troubled footballing genius, who provided England fans with some of their fondest memories during his exceptional but unpredictable career.

Gary Lineker, Wayne Rooney and José Mourinho all appear in this 2015 doc, but the bulk of the film is a candid interview with the man himself, who opens up about his childhood, his career and the trauma he’s faced throughout it.

It’s a chance to delve deeper into some of his biggest moments in his England career, and explore some of the demons he’s faced off the pitch.

While this intimate piece of filmmaking charts the late Jack Charlton’s role at the heart of defence in the England side of 1966, the majority of this documentary is actually focused on his time managing the Ireland national team in the 90s. Still, we’ll take any excuse to talk about this moving piece of work.

It’s an honest study of an inimitable character and his heartbreaking battle with dementia before his death in 2020, which looks beyond the game at the people he touched during his life and career. It’s a wonderful film which football fans need to see.

The Way Back: England’s Evolution Under Gareth Southgate

Few could have predicted that Gareth Southgate would be the man to bring back hope to the England team. The albatross of the missed penalty at Euro 96 was still hanging around his neck before taking on the job initially as caretaker in 2016, but he’s managed something pretty remarkable in that time.

Picking up after England’s embarrassing campaign at Euro 2016, and following Sam Allardyce’s controversial exit from the top job a few months later, this ITV documentary follows the manager as he went about giving fans something to believe in again – and made waistcoats the must-have fashion accessory in the process.

For many younger fans, 2018 will hold a special place in their hearts after England reached the semi-finals and looked like real contenders again. As a wonderful reminder of that special summer, this is pretty hard to beat.

For a football documentary tinged with a little melancholy (is there any other kind for England fans?) then the BBC’s Return to Turin is a good place to look.

It sees Gary Lineker, Terry Butcher and Paul Parker revisit the scene of the 1990 World Cup semi-final between England and West Germany, sharing their first-hand experiences from the game 31 years ago.

It’s a nostalgia-fuelled look back at one of the finest tournaments in the history of national football, and another reminder of what could have been for a very talented England side who came so close.

Teen Mom Ashley Jones shares sweet pic with Holly, 3, after troll slammed her for not ‘being’ with the toddler enough

Chris Hemsworth poses with Taika Waititi as he jokes they ‘squeezed the budget’ for Thor: Love and Thunder

Lisa Vanderpump, 60, gets a PENIS tattooed on her chest by Steve-O during wild dinner on her show Overserved