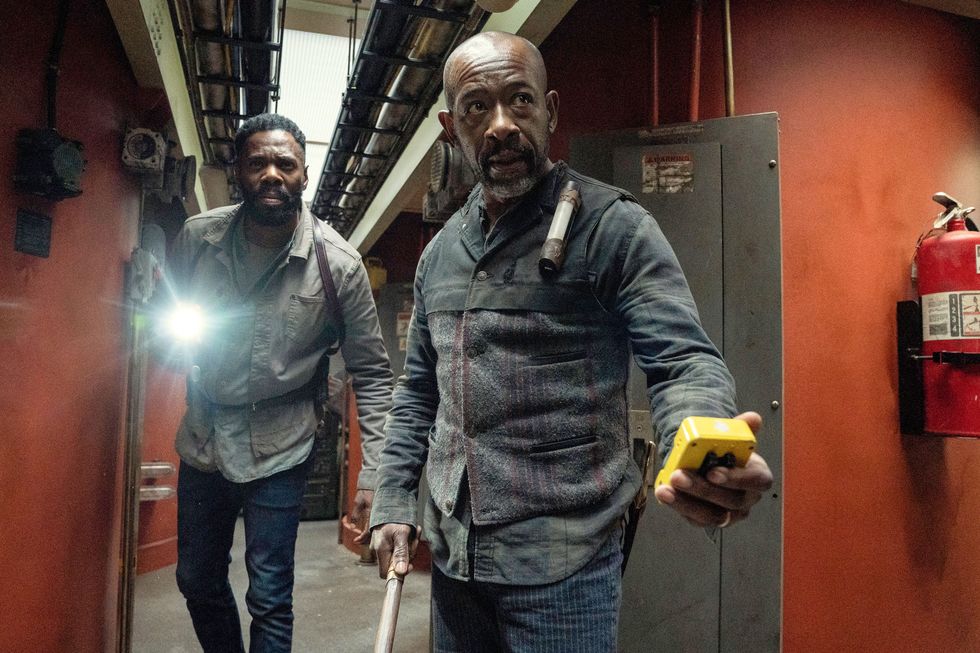 *Warning: This article contains spoilers for season 6 of Fear the Walking Dead*

Fear the Walking Dead boss Andrew Chambliss has spoken about the shock twist involving Strand (Colman Domingo) and Morgan (Lennie James) in the most recent episode.

The drama’s co-showrunner Andrew Chambliss spoke about the moment which saw Strand double-cross his ally Morgan and kick him into the path of a crowd of walkers, leaving him for dead.

The moment left fans speechless, with Strand attacking his friend to try and stop Teddy (John Glover) and Riley (Nick Stahl) from launching missiles from the submarine.

Despite Stand’s actions, Morgan managed to survive and Teddy and Riley were able to launch the warheads.

Speaking to Entertainment Weekly, Andrew explained Strand’s actions by saying: ‘I think in that moment, he very much is intending for Morgan to be walker chum to draw the walkers away so he can get to the weapons room and stop the missiles from being launched.’

He added: ‘In his mind, that’s completely justified. I mean, it’s sacrificing Morgan to save everyone else. And he’s spent the entire episode seeing Morgan on this kind of self-sacrificial bent, where Morgan thinks the reason he survived the gunshot at the end of season five and has survived this entire season is to do something like this.

‘So in Strand’s mind, he can justify that by saying, “It will allow me to get to the weapons control room to stop Teddy, and I’m giving you [Morgan] exactly what you want. You get to go out being the hero.”‘

1000lb Sisters: How much weight did the Slaton sisters lose?

Andrew went on to say: ‘And I think in Strand’s mind, if he had gotten to the weapons control room and he had stopped Teddy, he would have played up Morgan dying the hero and would have left out the little details, but he’s the one who pushed Morgan into those Walkers.’

Fear the Walking Dead is gearing up for the finale of season six this weekend, with the repercusions of Strand’s actions set to take hold.

A seventh season of the zombie drama is expected to arrive later this year.

Fear the Walking Dead airs on AMC in the US and on AMC UK in the UK.

MORE : The Walking Dead fans angry as they’ll have to pay to watch final season on Disney Plus

The Masked Dancer: With Beetroot, Flamingo and Viper already discovered who could the others be?