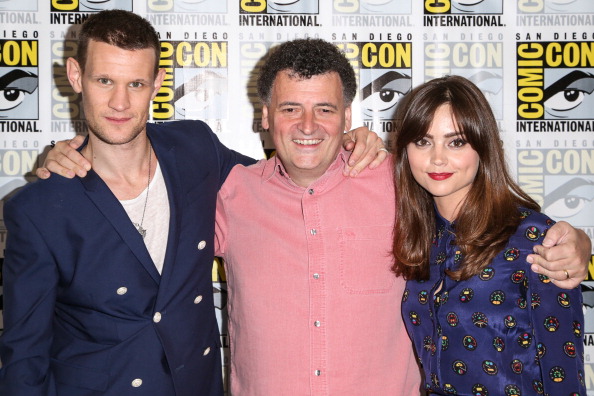 Former Doctor Who boss Steven Moffat has revealed he once played the role of the Doctor… and not a single fan had a clue about it.

Steven, who was a showrunner for Doctor Who before stepping down from the role after the 2017 series, posted a picture on Instagram to mark the 14th anniversary of a classic episode.

Sharing an image of a Weeping Angel on social media, the 59-year-old said that he had a pivotal role in the readthrough for the 2007 episode Blink, which marked the first time fans were introduced to the terrifying angelic beings.

In the caption for the photo, Steven wrote: ‘Cheer up, dear – it’s been 14 years since Blink. In honour of the anniversary, here’s the Angel at the bottom of my garden.

‘Brand new, exclusive fact (unless I’ve revealed it before which is more than likely.) At the Blink readthrough I read the part of the Doctor. I was GREAT! People wept.’

Steven recalled executive producer Russell T Davies ‘slapping’ him at the time, which he took as a ‘compliment’.

‘Russell [T Davies] slapped me. I’m sure he meant it as a compliment,’ he said.

‘As a direct consequence of that readthrough, Carey Mulligan became an international star. And I moved on to doing the stage directions.’

While Steven didn’t explain why David wasn’t present at the readthrough to play his own part, we love the visual of the TV writer embodying the time-travelling extraterrestrial being.

Last year, Steven discussed the prospect of returning to Doctor Who in future, having recently written a short story about Jodie Whittaker’s iteration of the Doctor.

Speaking to RadioTimes.com, he said: ‘I’ve always said, and Russell has always said, I’ll come back when there’s an emergency. Well what do you call this?

‘But no, I think that Doctor Who has to change hands and have new creators, new people involved.’

It’s believed that Jodie, who plays the Thirteenth Doctor, may soon announce her departure from Doctor Who, having been on the series since 2017.

If the actor were to leave her post now, she would be following in the footsteps of Matt Smith, Peter Capaldi, William Hartnell, Patrick Troughton, Peter Davison and Sylvester McCoy, who also all stepped down after three seasons.

Several stars have been tipped as possible replacements, including I May Destroy You’s Michaela Coel and It’s A Sin’s Olly Alexander.

Doctor Who is available to watch on BBC iPlayer.

MORE : Doctor Who: Two Doctors Jodie Whittaker and Christopher Eccleston join forces as they swap the Tardis for theatre

MORE : Christopher Eccleston says Doctor Who ‘a bit of a boy’s club’ and calls for change

Carer stole £25,000 then threatened to set himself on fire in police station

Conan Show ending: Who will be the final celebrity guests?