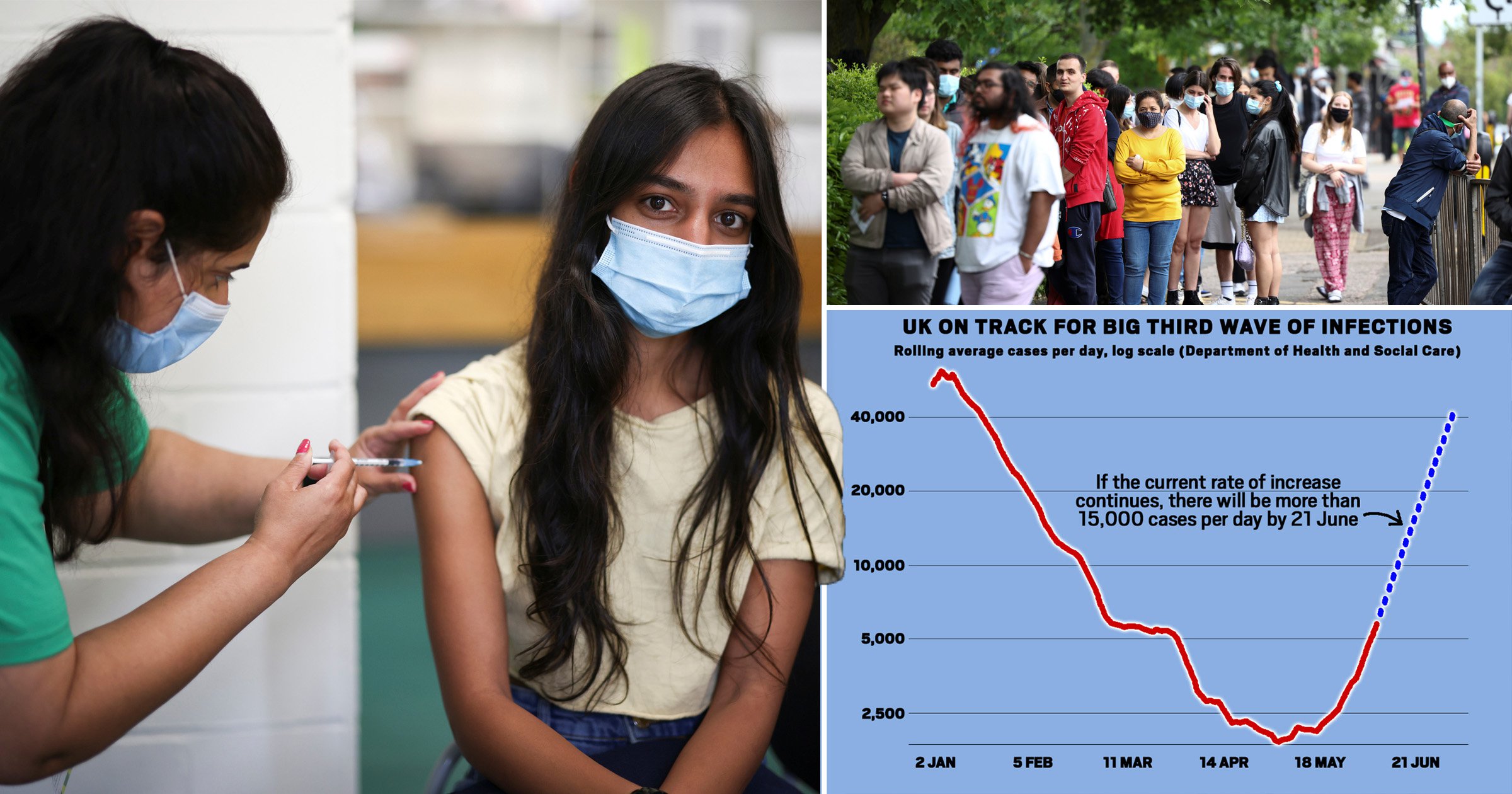 The end of lockdown could be pushed back by a month to allow more people to be fully vaccinated first, it has been reported.

Boris Johnson is expected to announce on Monday whether step four of his ‘roadmap’ to end restrictions can go ahead on June 21 as planned.

It would mean no more social distancing rules, the reopening of nightclubs and an end to limits on weddings and large events.

But so-called ‘Freedom Day’ could be delayed due to a recent surge in Covid infections and fears of the highly-transmissible Indian strain, which now accounts for 91% of cases in the UK.

Ministers are said to be discussing whether step four should be delayed for two weeks or a month.

It is thought they want to give more people in their 40s a window to get their second dose of the vaccine and for it to take effect before fully lifting restrictions.

A source told the Times: ‘This is about giving people certainty. The worst-case scenario is that we ease restrictions and then have to implement them again. This has to be a one-way ticket.’

However, another cabinet source said a two-week delay would be long enough.

They said: ‘By June 21 everyone over 50 who wants a second jab should have had one.

‘You just have to wait another couple of weeks so that they all have full antibody protection. At that point you really have protected the vulnerable.’

The Prime Minister is expected to wait until Sunday to look at the latest figures before making a decision.

Is is thought he will reject proposals for a ‘mix-and-match’ approach to lockdown easing, meaning certain venues could stay closed for longer.

Concerns have been raised that such a strategy would be confusing to people.

According to the Times, the lifting of restrictions for wedding ceremonies, receptions and christenings will go ahead on June 21 regardless of any other delays.

Scientists say that the Indian strain – recently renamed the Delta variant – is around 60% more transmissible than the Alpha variant first identified in Kent late last year.

A map shows 25 hotspots in the UK where cases of the mutant variant is rising rapidly, with Stirling, Manchester, Rochdale and Bolton among the worst affected.

The latest data from Public Health England shows cases in England have risen among almost all age groups, particularly 20 to 29 year olds.

The Zoe Covid Symptom Study App estimates there are currently 11,908 new cases every day compared to 5,677 reported last week – an increase of 110%.

On Monday Health Secretary Matt Hancock revealed that just 2% of people hospitalised in England with the Delta variant had received both doses of the vaccine.

Out of those, 83 were unvaccinated and 28 had only had their first dose, while only three had had both.