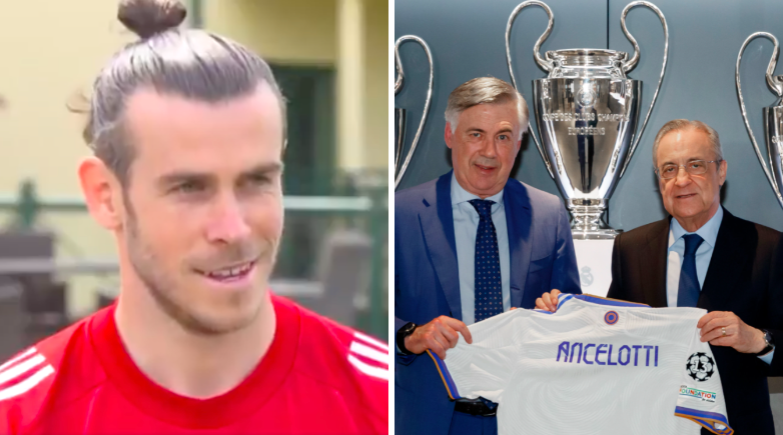 Gareth Bale says he expects to hold private talks with new Real Madrid boss Carlo Ancelotti over his future ‘at some point’ this summer but is fully focussed on Wales’ European Championships campaign for the time being.

The 31-year-old fell out of favour under former Madrid head coach Zinedine Zidane and rejoined Tottenham on loan in search of regular game-time last September, where he started slowly but finished with 16 goals in 34 appearances for the north London outfit.

Recent reports coming out of Spain suggest Bale could be on his way back to the Premier League for good – with Spurs eyeing a permanent move – and there have even been rumours early retirement could be on the cards for the forward once the Euros are complete.

However, Ancelotti taking over the reins from Zidane looks to have given Bale the platform to relaunch his Madrid career given the pair have a close relationship after winning the Champions League together during the Italian’s first stint as manager at the Bernabeu.

‘He’s returned to Real Madrid and he’s a great manager, a great guy,’ Bale told Sky Sports when asked how Ancelotti’s appointment will impact his future.

‘We had a great time together at Real Madrid and he’s an amazing person to have in charge of Real Madrid, I’m sure he’s going to be amazing.

‘Obviously I spoke to him when we played Everton at the start of the season. We hugged and had a little chat so it was nice.

‘But I’m still in the same boat. I haven’t thought about it too much, I’m concentrating on what’s happening now, our preparation, what’s going to happen in the Euros and I’ll sort the rest out after.’

The Wales attacker added: ‘It hasn’t affected anything yet. Like I said, I haven’t thought too much about.

‘Obviously I know Carlo has returned and I get on really well with him and I’m not denying that.

‘But I’m really just concentrated on now, I’m not thinking about the future at all.

‘I imagine I’ll have a conversation with him at some point and I’ll go from there when that happens.’

At his opening press conference on Wednesday, Ancelotti played down speculation over an impending exodus at Madrid and insisted Bale, Eden Hazard, Isco, Sergio Ramos could all be set for ‘important’ roles going forward.

‘I have a lot of love still for Gareth Bale, Isco, Marcelo… they will have motivation to show they can still play for Real Madrid,’ he told reporters.

‘Eden Hazard? He’s a top player, he’ll show his skills. Hazard and Bale can be so important for us.

‘Sergio Ramos is a very important player. I know there are talks… but I don’t know the details… when I do, I can say more.

‘I’ll talk with the club about Ramos’ future.’

Kieran Tierney is a ‘warrior’ and transforms Arsenal when he’s in the side, insists Ashley Cole