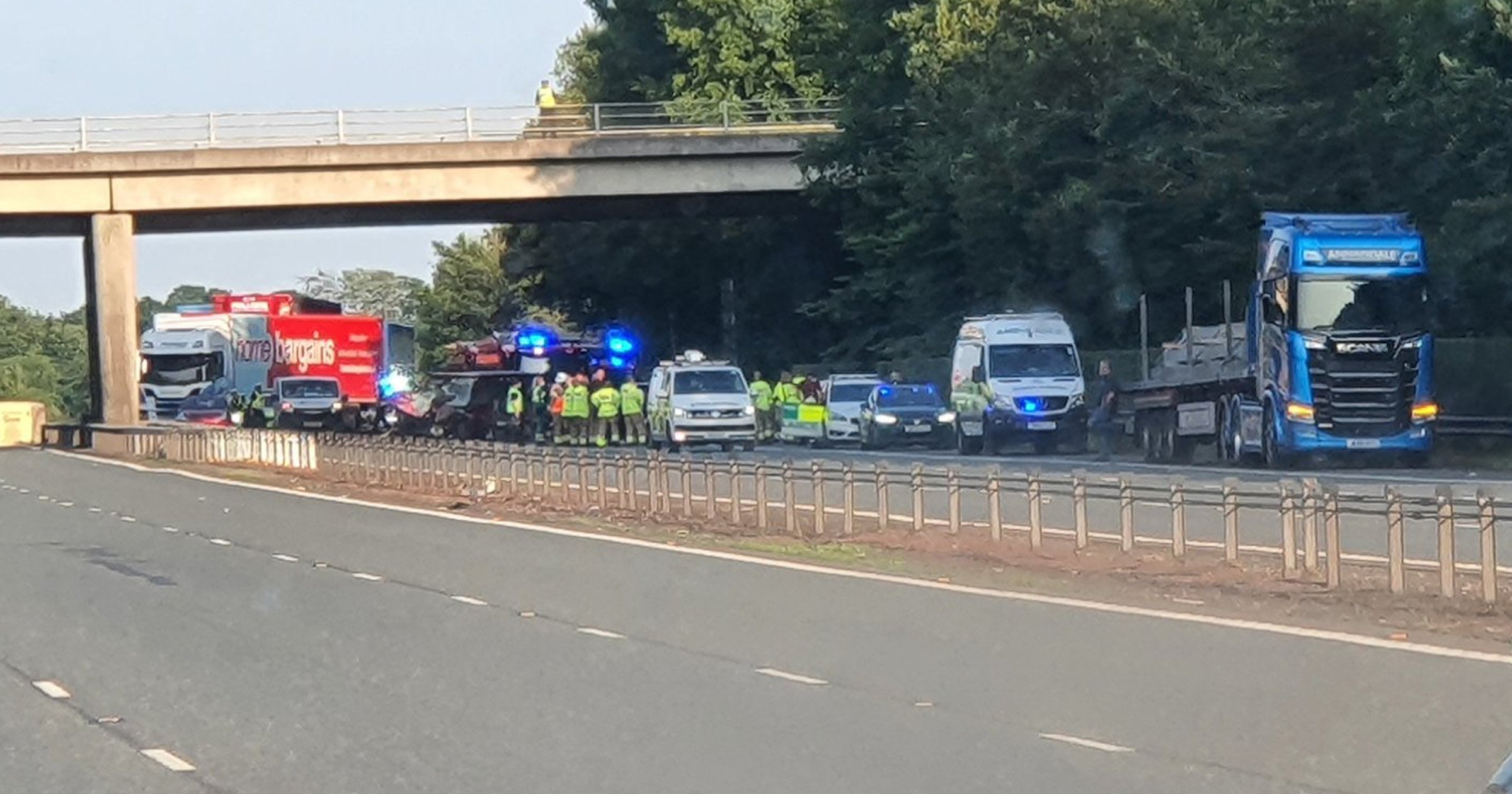 A teenage girl has died and two others are fighting for their lives after a minibus and lorry crashed on a motorway in southern Scotland.

The 15-year-old was travelling in the minibus with six others, including a six-month-old baby, when it collided with a lorry on the M74 on Wednesday afternoon.

Ther force of the collision caused the minibus to smash into the central reservation at junction 20, near Annan, Dumfries and Galloway.

Paramedics rushed the schoolgirl to Cumberland Infirmary in Carlisle, but she later died of her injuries.

A 17-year-old boy and a woman, 42, are currently fighting for their lives after they were each flown by air ambulance to Newcastle’s Royal Victoria Hospital and James Cook Hospital in Middlesbrough.

A baby girl, two boys, aged seven and 12, and the 45-year-old driver of the minibus were all taken to Cumberland Infirmary and treated for minor injuries.

The collision happened between the red Ford Transit Tourneo minibus and the white lorry at around 4.45pm while travelling north on the M74.

Sergeant Jonny Edgar said: ‘Our thoughts and condolences are with the family involved in this devastating incident, and specialist officers are supporting them during this time.

‘An investigation is under way to establish the full circumstances surrounding the crash and it is important we speak to anyone who was on the road at the time, and may have witnessed what happened or observed the minibus beforehand.’

Motorists with dashcams who were travelling on the M74 at the time are being urged to check if they have any footage of significance.

Road closures remained in place for about 12 hours following the crash and reopened at 4.40am this morning.

Motorists driving the same route posted on social media to say they were stuck in traffic for several hours.

Sarra Hoy, wife of Olympian Sir Chris Hoy, tweeted: ‘Standstill M74 northbound, near Gretna, after what seems to be a dreadful accident. Not moving anytime soon.

‘Lost track of the number of emergency vehicles we have seen and now air ambulance. Hoping everyone ok and so thankful for our incredible emergency services.’

She later added: ‘Going to be turned round shortly after almost four hours at a standstill. A huge operation. Thank you @policescotland and everyone involved. Praying and hoping for those involved in the accident.’

Locals from the nearby village of Kirkpatrick-Fleming brought food and drink to people stranded in the traffic.

Stephen Muir, 38, said he delivered around 100 ice lollies, 150 bottles of water, juice, fruit and crisps donated by locals and nearby businesses.

He said: ‘I am the chairman of the community council and we are a close community, (we) like to help each other.

‘From my house (I) could see a few children standing outside the vehicles with parents. It was 26C outside so felt it’s only right to go and offer help.’

What has Martin Lewis said about Bitcoin and cryptocurrency?