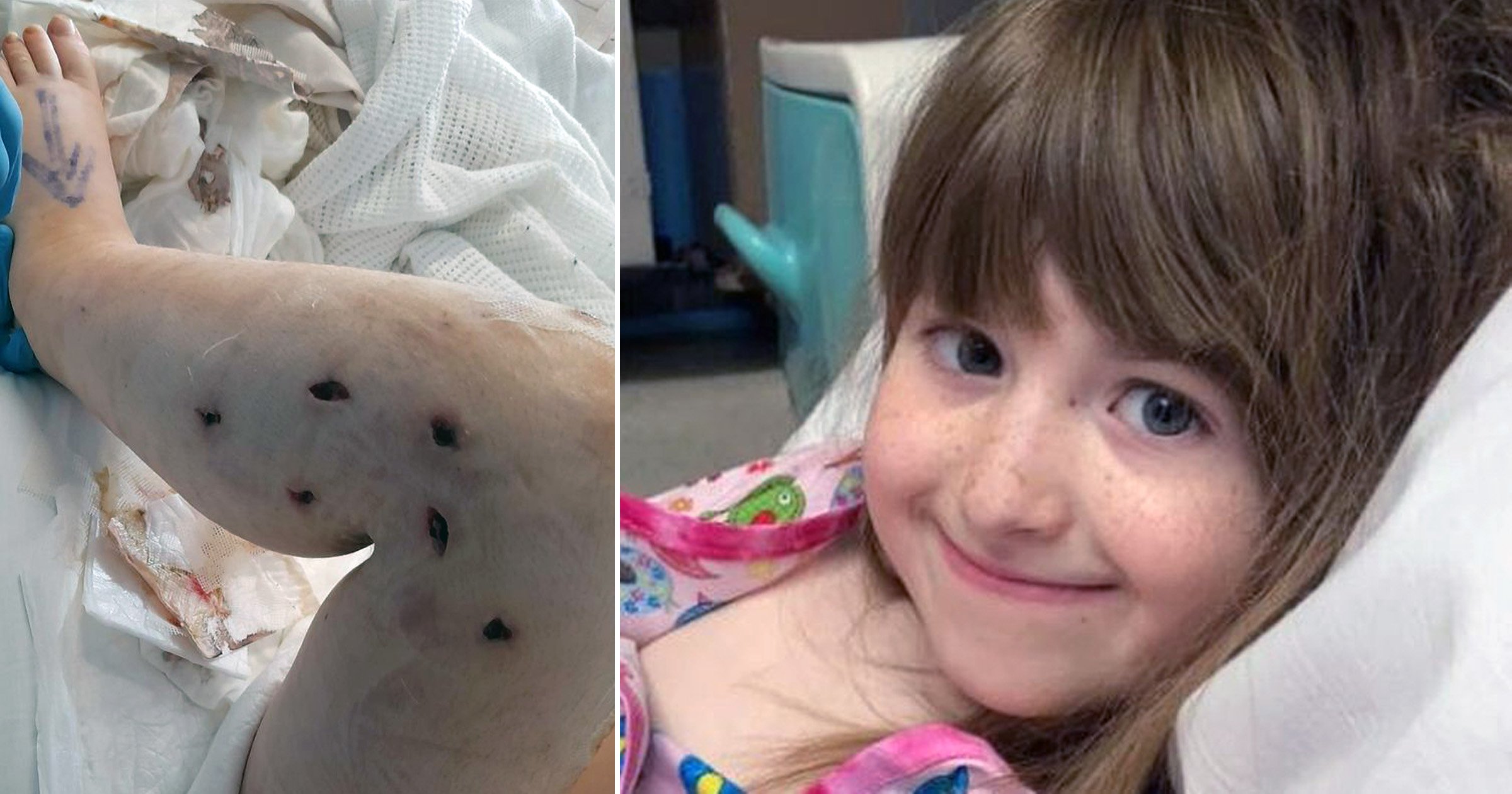 When seven-year-old Annabelle Newman came home with a three-millimetre thorn stuck in her leg, her mother simply removed it and thought nothing more of it.

But one week later, Charlene Kirby, 30, noticed the once-tiny scratch on her daughter’s knee had developed into a rash and was oozing puss.

Annabelle visited the GP twice and was given two rounds of antibiotics, but the infection failed to clear and her skin suddenly turned grey, leading to a trip to to the A&E.

Cut to seven operations later and Annabelle, from Pembrey, Wales, is lucky to have kept her leg from being amputated.

Mum Charlene said: ‘I never thought Annabelle would be at risk of losing a limb from a thorn.

‘She was fully dressed but it pierced through her uniform when she was playing in the forest at school.’

Annabelle was first taken to Glangwili Hospital on May 5, where an ultrasound found the infection had spread to her feet and up to near her groin.

She has since endured a staggering seven operations to remove flesh and clear abscesses, leaving her with 11 wounds.

Charlene added: ‘The last few weeks have been torture.

‘She has been in a lot of pain and unable to move her leg.’

Charlene and dad Oscar Newman, 30, have been taking it in turns to stay with their daughter in the hospital.

The mother said the whole ordeal has been ‘heartbreaking’ for the couple as their child is ‘a cheerful little girl who’s usually running around.’

Charlene added: ‘Seeing her stuck in bed and scared has been horrible

‘She will be left with scars as they made 11 holes to try and swab and clear up the infection.

‘The surgeon couldn’t believe how infected her leg was.’

On May 11, Annabelle had her second operation where she had a cannula in her arm and an MRI scan and then on May 16, she developed an abscess and two cysts on her leg.

‘But she is very lucky as she could have got sepsis which is likely to lead to an amputation,’ added her mother.

Annabelle spent three hours in surgery to sample her blood and bone marrow before a biopsy of the infection was taken and her leg was put in a plaster cast.

Her seventh operation was on June 4 to ensure the wound by her groin was clean.

She has not been given a discharge date as nurses are still required to attend to and clean her wounds daily.

The thorn that scratched Annabelle was reportedly from the blackthorn (prunus spinosa), which has long spikes.

Her mother has warned other parents to be vigilant.

Charlene said: ‘I want other parents to be aware of sharp shrubs or objects, especially around muddy soil areas.

‘It isn’t worth the risk to lose a limb over a thorn.’

Cleaning advert banned for stereotyping women around the house

Mum relives horror moment son, 3, was hit by a bin lorry before his tearful sister tried to give him CPR on roadside