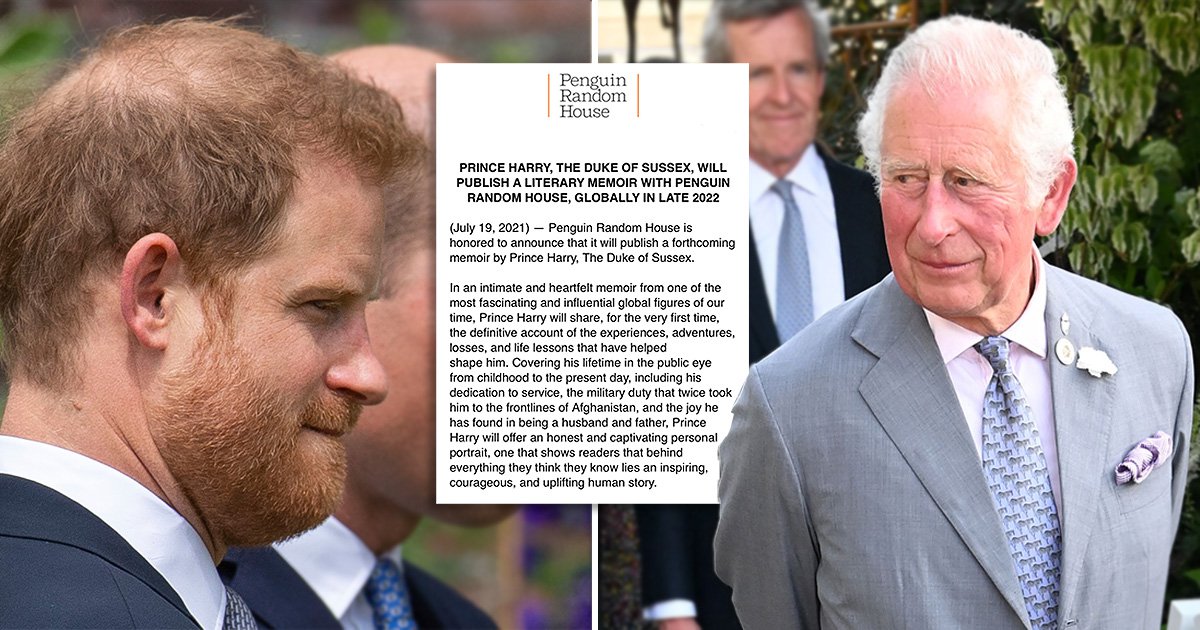 Prince Harry ‘blindsided’ the Royal Family by telling them he was writing a book about his life moments before the rest of the world found out, it is claimed.

The Duke of Sussex has been secretly collaborating with Pulitzer-winning ghostwriter J. R. Moehringer for a year now.

He will share ‘the definitive account of the experiences, adventures, losses, and life lessons that have helped shape him’ in the memoir, released in late 2022.

A source allegedly told The Sun Harry didn’t give his father Prince Charles or his brother Prince William notice about the tell-all book.

They said: ‘Harry scrambled to contact his family only when he knew the story was coming out  —  just moments before it became public.’

Charles, who shares a rocky relationship with his son, is said to have been ‘surprised’ by the news.

His aides were apparently informed while he and Camilla were on their first public engagement in 15 months in Cornwall.

It remains unknown if Harry told Her Majesty prior to this, although it’s claimed Buckingham Palace officials had no idea about the book.

A spokesman for Harry allegedly said he told his family – including the monarch – about the book ‘very recently’.

A source added: ‘Clearly no fences were mended while he was visiting for the unveiling of Diana’s statue. If anything, relations between Harry and Charles appear to have got worse.’

Prince Harry has said of the upcoming memoir: ‘I’m writing this not as the prince I was born but as the man I have become. I’ve worn many hats over the years, both literally and figuratively, and my hope is that in telling my story – the highs and lows, the mistakes, the lessons learned – I can help show that no matter where we come from, we have more in common than we think.

‘I’m deeply grateful for the opportunity to share what I’ve learned over the course of my life so far and excited for people to read a first-hand account of my life that’s accurate and wholly truthful.’

A statement from publisher Penguin Random House added that Harry ‘will offer an honest and captivating personal portrait, on that shows readers that behind everything they think they know lies an inspiring, courageous and uplifting human story’.

It will ‘cover his lifetime in the public eye from childhood to the present day, including his dedication to service, the military duty that twice took him to the frontlines of Afghanistan, and the joy he has found in being a husband and father’.

It comes after Harry and wife Meghan Markle made explosive allegations in a tell-all interview with Oprah Winfrey back in March.

The dad-of-two later spoke of ‘genetic pain and suffering’ and compared his life to ‘being in a zoo’ in an interview on the podcast Armchair Expert with Dax Shepard.

An ‘insider’ told the Daily Mail they believe ‘everyone is just tired of being angry when it comes to those two’.

Experts have suggested Harry will have been given ‘at least’ $20 million (£14.6 million) as an advance for the book deal with Penguin Random House.

The exact financial details remain private, although Penguin has suggested Harry will donate the money to charity.