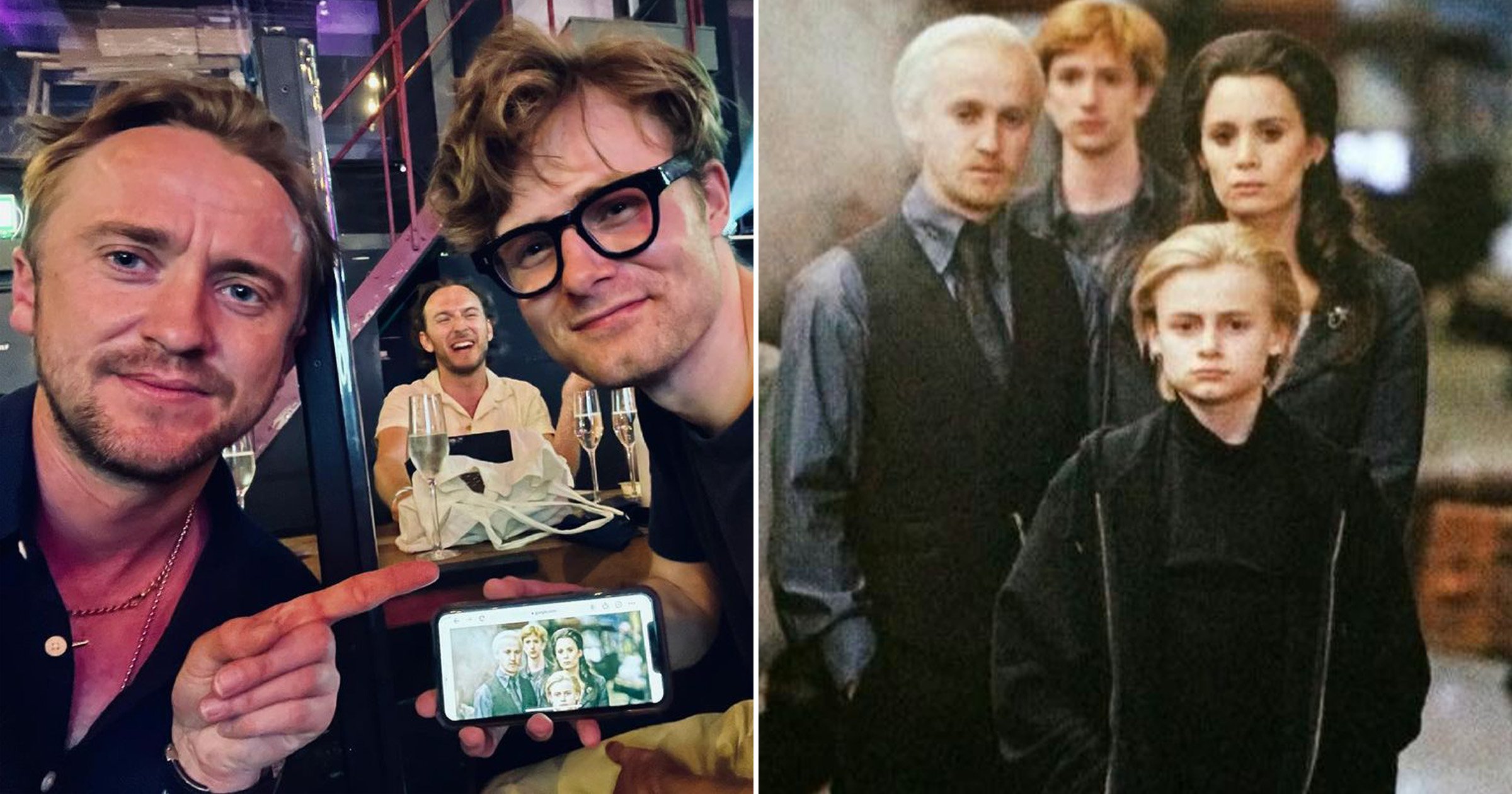 It was a good day for Harry Potter fans as Draco Malfoy reunited with his son Scorpius Malfoy.

Actor Tom Felton revealed he had run into his on-screen child, played by Bertie Gilbert, as he shared an Instagram snap of them sitting together on Thursday.

The 33-year-old actor explained that they had met by ‘coincidence’ during a screening of the upcoming movie, In The Heights, in London.

‘When Draco sat next to Scorpius. Completely by chance! Was such a lovely coincidence before sitting down to watch @intheheightsmovie 🙌🏼 🐍 x’ Tom wrote in the caption.

In the image, Tom is seen pointing excitedly at the 24-year-old actor who holds up his phone to show a throwback image of them from the Harry Potter set.

Bertie played the role of Draco’s son Scorpius during a brief appearance in 2011’s Harry Potter and the Deathly Hallows: Part 2.

Bertie portrayed the role of Draco’s son in the climax scene of the movie, in which the story jumps forward 19 years following the Hogwarts battle.

Draco, as well as Harry, Hermoine and Ron arrive to the station to drop their children at the station.

This comes after Tom awkwardly laughed off dating rumours with him and his former co-star Emma Watson, who played Hermione Granger, saying that ‘silence will speak volumes’.

He went on in the Entertainment Tonight interview: ‘We are something, if that makes any sense? We’ve been very close for a long time. I adore her. I think she’s fantastic. Hopefully, she returns the compliment.’

Tom went on: ‘As far as the romantic side of it, I think that’s a Slytherin/Gryffindor thing rather than a Tom and Emma thing.

‘I absolutely think the world of her. I think to be a part of what we’ve all been a part of, but for her to be the only girl, certainly the youngest one on set, to grow up with what she had to grow up with was incredibly exciting. You’re going to get me teary now, but no, I think she’s a fantastic influence on the world.’

Tom and Emma have remained close since the franchise ended and have shared a number of pictures together on social media, including one in 2019 where Tom gave his friend a guitar lesson in South Africa.

In a chat with Metro.co.uk not long after, Tom made it clear he’s tight with Emma, noting: ‘Emma’s got a place around the corner from me in LA, as does Bonnie [Wright, who played Ginny Weasley], I think Matt Lewis [who played Neville Longbottom] lived there for a while.

‘We’re growing up slowly but surely. I couldn’t say enough good words about any of them.’

He continued: ‘Rupert’s such a down to earth guy despite all the fandom and whatnot. Daniel, his work ethic is incredible. He’s a funny, witty guy.

‘Emma’s Emma, she’s a unique, beautiful soul. It’s always nice to bump into one another.’

MORE : Stephen Fry insists JK Rowling ‘will remain a friend’ as he speaks out over ‘anti-trans’ backlash

X Factor Italy paves way for major shake-up as it scraps gender and age categories: ‘Talent is a neutral noun’