A BRITISH backpacker saved her identical twin sister from a crocodile’s jaws by punching it in the face.

Georgia Laurie, 28, fended off the predator’s repeated attacks in the dark while dragging unconscious Melissa out of the water in Mexico.

Georgia heard her sister’s cry for help, then found her floating face down on the surface.

Georgia fought off the beast with a flurry of punches and swam back to the tour boat on Sunday night.

Melissa is now in an induced coma in hospital while Georgia also suffered bite wounds, their parents said.

Mum Sue Laurie, of Sandhurst, Berks, told MailOnline: “We have twin daughters who are travelling around Mexico who were attacked by a crocodile. 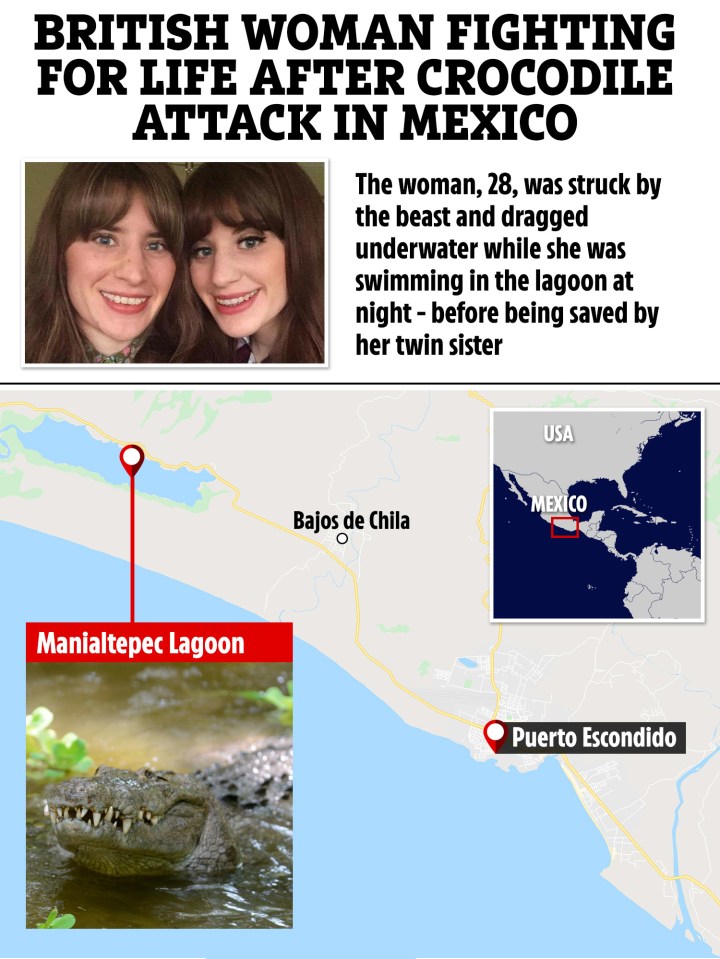 The pair had been on a boat trip to the Manialtepec Lagoon – which is famous for its bioluminescent waters caused by millions of tiny creatures that glow in the dark.

Dad Sean, 63, said that they were swimming after dark in the lagoon when Georgia heard Melissa cry out.

He said: “She called for her but she didn’t reply. She could hear other members of the tour group but not did not hear anything from her sister.

Swimmers who visit the Manialtepec Lagoon are warned that crocodiles up to ten feet long live there.

But the twins’ father claims they were assured by their tour company that there were no crocodiles in the water.

He said: “The girls asked specifically if it was safe to go swimming and the guide had said it was.”