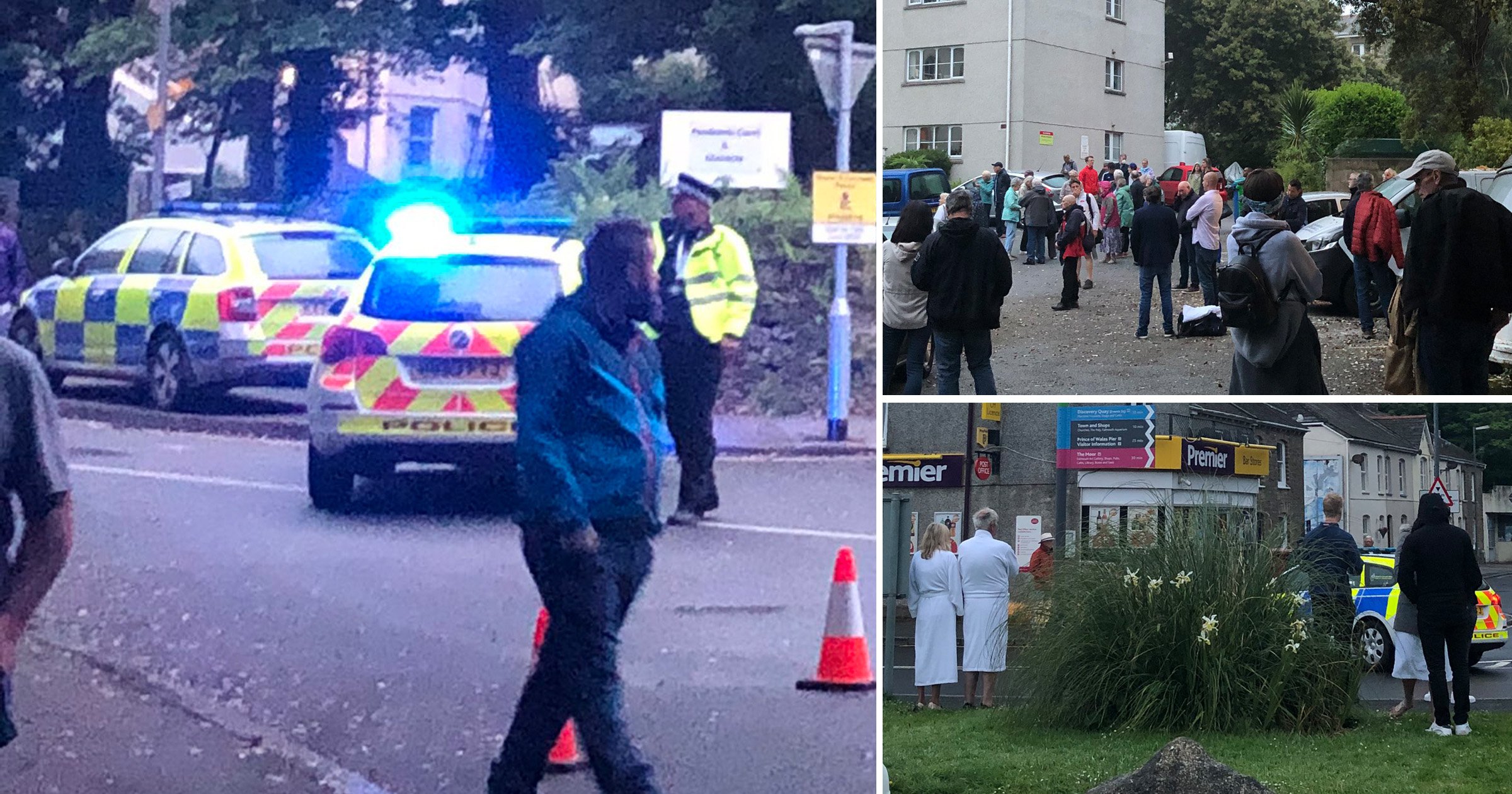 Around 100 people were evacuated from a hotel near the G7 summit in Cornwall following a bomb scare.

Officers rushed to Falmouth Hotel at about 3.15am following reports of a suspicious package found in the grounds.

Hotel guests were seen waiting in the car park in their dressing gowns and pyjamas after being woken up shortly before 5am by staff and police.

Devon and Cornwall Police later confirmed that it was a hoax package and an investigation has been launched into the incident.

Falmouth is being used as a base for the world’s media covering the G7 summit at the Carbis Bay Hotel – around a 40-minute drive away – where world leaders will gather from tomorrow.

Officers were seen in head torches scouring the hotel grounds for anything suspicious as they cordoned off the area before dawn.

Guests were then ordered to wait in the carpark of a nearby hotel for their safety.

Devon and Cornwall Police earlier said: ‘In order to maintain public safety, the area is currently being safely evacuated as a precautionary measure.

‘This will impact on those staying within the Falmouth Hotel, Madeira Hotel and campervans in the area, as well as neighbouring properties.’

Following an assessment by the Royal Navy Explosive Ordnance Disposal, police have now confirmed the area is safe and guests have been allowed to return to their rooms.

In an update the force said: ‘The device has been declared not viable and therefore safe.

‘In total around 100 people were displaced; these people are now being allowed back into their rooms and the 100 meter cordon is being removed.

‘A smaller scene guard will remain in place until the item is collected and removed by scenes of crime.

‘We currently believe that this was a hoax incident and a criminal investigation has been launched.

‘We thank the public and those who were evacuated for their assistance.’

The incident came just hours after Boris Johnson and US President Joe Biden arrived in Cornwall for the G7 event.

The Group of Seven countries brings together some of the world’s richest democracies – the UK, US, Canada, Japan, France, Germany and Italy, along with representatives of the European Union.

It will be the first time the leaders have met in almost two years due to the pandemic, with the Covid battle set to be one of the main topics on the agenda.

President Biden was pictured waving as he stepped off Air Force One with his wife Jill at RAF Mildenhall in Suffolk on Wednesday evening, for his first official overseas visit as US president.

He was greeted to a hangar full of cheering service personnel and their families at the American airbase, before heading to Cornwall Airport Newquay.

What is black fungus and how is it connected to Covid?