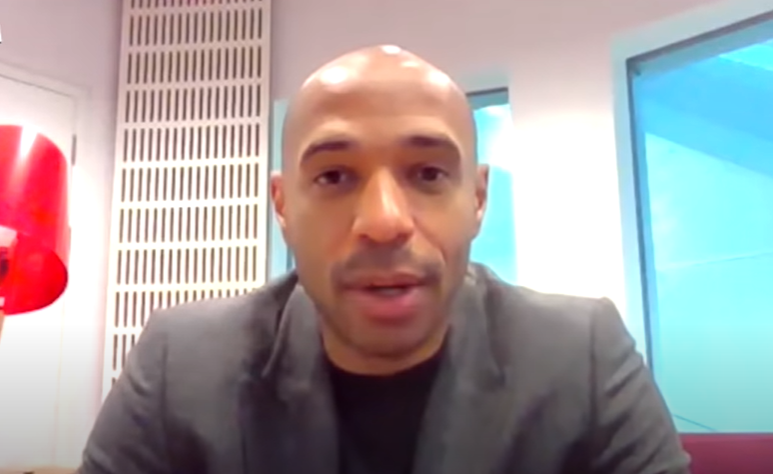 Arsenal legend Thierry Henry admits he is stunned by the brilliance of Chelsea midfielder N’Golo Kante.

Kante is being tipped to claim the Ballon d’Or award after playing a starring role in Chelsea’s recent Champions League triumph.

The 30-year-old, who has now won the Champions League, Premier League, Europa League and FA Cup at Stamford Bridge, was named Man of the Match in Chelsea’s two semi-final clashes against Real Madrid and in the final against Manchester City.

Henry is a huge admirer of his compatriot, who helped France win the World Cup in 2018, and says his reading of the game is almost unrivalled.

He told the FIVE YouTube channel: ‘Listen, you notice certain guys because they score and grab the headlines.

‘He reads the game to be able to intercept the ball without fouling or tackling most of the time. He arrives at the same time as the ball, sometimes earlier.

‘So many times you see him getting the ball back and soon after it’s a goal for Chelsea. The capacity he has to read the game and see where the ball is going, sometimes he gets there before the ball!

‘It’s not guessing. When they say a striker smells the goal, it’s the same with Kante. He knows exactly where the ball is going and he can read the pass and the pattern of play.’

'How does he do it?!' Arsenal legend Thierry Henry stunned by Chelsea star

Kante, who Chelsea signed from Leicester City in 2016, still has two years left on his current contract and wants to enjoy ‘many more’ special moments in west London.

Asked about his future in the aftermath of Chelsea’s Champions League win, Kante said: ‘I have been at Chelsea for 5 years, I have enjoyed wonderful seasons.

‘I hope to experience many others. It is not something that I am focusing on. I have another two years of contract with Chelsea and I feel good.’

Builder leaves family-of-six’s £540,000 house in ruins with no roof after row with owner over pay