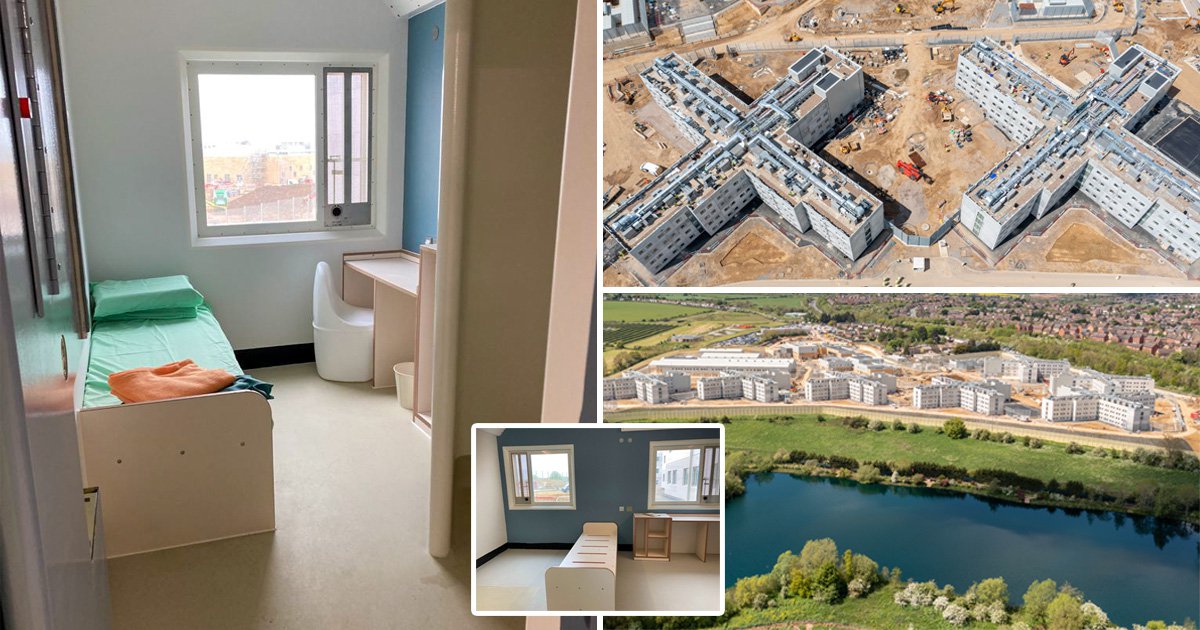 The first arrivals at the new so-called mega jail will be called ‘residents’ rather than prisoners as they prepare for release into society.

The privately-run facility is focussed on rehabilitation and will feature 16 classrooms, 24 workshops and cells without bars in the windows.

The majority of inmates will be transferred to HMP Five Wells – which is the UK’s first purpose-built ‘resettlement’ prison – as they prepare for release.

Some of the cells, described as ‘rooms’, have views over the River Nene, while outside those seeing out their time can make use of four football pitches for exercise, a gardening area and a sloping auditorium.

The all-male, Category C prison, which will become the biggest in England, will also have dedicated classrooms and workshops for ‘high-quality academic and vocational learning’.

A central hub will be used for the educational and vocational work as well as social activities.

The aim is for all of the residents, as they will be known, to have a qualification by the time they walk out of the gates in Wellingborough, Northamptonshire.

Run by security company G4S, the £253 million jail reflects changes to the wider prison estate over the past five years.

In 2018, it was reported that HMP Warren Hill in Suffolk was also using the residents term and describing cells as rooms.

The following year, the prison service confirmed bars would no longer be placed on cell windows, as the feature dated back to times when glass was either too fragile for the purpose or had not been used at all.

Toughened glass within a sealed design is more secure than the traditional approach, officials said.

Other changes at Five Wells include ditching the K-block shape in favour of staggered, cross-shaped buildings.

One man wrote on Facebook: ‘Sorry but I thought the idea was to punish them?? What next, officers bringing them breakfast in bed?’

Resettlement jails are aimed at cutting the cycle of re-offending by providing tailored support and supervision for prisoners with 12 months or less to serve.

Psychotherapist Adrianna Irvine, who has experience of working with life inmates in maximum security prisons, gave the new approach a cautious welcome.

The counsellor said: ‘Having no bars on the windows and being able to have a view of the scenery outside is a great idea for the prisoners’ mental health and welfare.

‘However, the single most important aspect for me is rehabilitation. To allow the prisoners to be outside playing football and gardening is all fabulous, but they will need to self-select.

‘You can’t mandate someone to have therapy, it has to come from within. Another aspect is the prison officers, as they too will need a very high level of support.’

Structurally completed on the site of the former HMP Wellingborough, which closed in 2012, the prison is scheduled to begin receiving inmates in January 2022. Kier group, another private company, was awarded the £253 million building contract by the Ministry of Justice in 2019.

A spokesperson for G4S said: ‘As the UK’s first purpose-built resettlement prison, HMP Five Wells will foster a purposeful environment that aims to prepare its residents for their transition back into society. This means providing them with skills and qualifications so they have the best chance to secure employment and turn away from crime.

‘The prison estate will include 16 classrooms and 24 workshops for high-quality academic and vocational learning. Our aim is for all residents to have a meaningful qualification when they leave.

‘The majority of prisoners at Five Wells will have transferred in from other prisons because they are nearing the end of their sentence.

‘HMP Five Wells will be operated by G4S on behalf of the Ministry of Justice, which already runs several highly-rated prisons in the UK, that are at the forefront of innovative programmes focused on training and care.’

When is Bachelor in Paradise 2021?