ISRAEL sent an artillery barrage into Lebanon in retaliation against a failed missile strike believed to have been launched by a militant group in support of Palestine.

Terror group Hezbollah are believed to be behind the revenge attack at around 11.30pm from the area of Rashaya Al Foukhar, south Lebanon.

Hezbollah supporters carrying a missile during a pro-Palestinian demonstration[/caption]

Israeli artillery firing back towards where the rockets were fired[/caption]

Israel hit back with artillery fire directed at the “sources of the launches”, the country’s military announced.

Although no group has claimed responsibility for the attack from Lebanon, it came after a large Hezbollah-organised demonstration in support of Palestinians took place in the capital Beirut – in which those taking part hauled huge missiles.

But the six missiles fired towards northern Israel did not enter the country, according to the Israeli military.

“Six failed launch attempts were identified from Lebanon that did not cross into Israeli territory,” the army said in a statement.

“Artillery forces fired toward the sources of the launches.”

A Lebanese military source said three rockets had been fired from Southern Lebanon towards Israel. 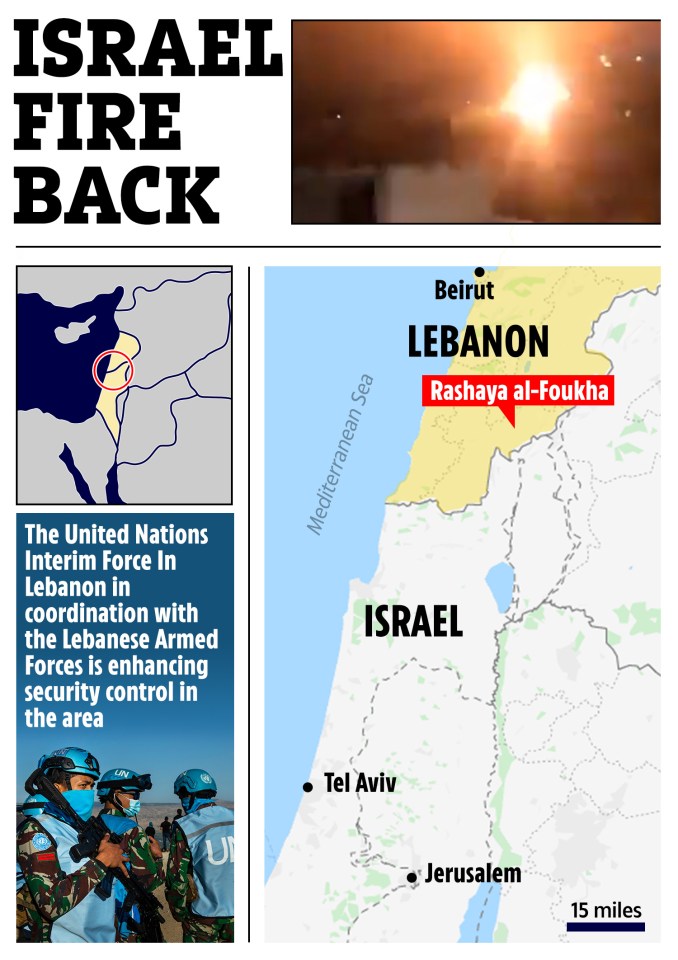 “Three Grad-type rockets were fired from the Shebaa Farms area,” not far from the Israeli border, the Lebanese military source said.

The UN Interim Force in Lebanon said it had detected rocket fire around Rashaya al-Foukhar and urged all parties to “exercise maximum restraint”.

UNIFIL and the Lebanese Armed Forces have enhanced security measures in the area and have intensified patrols in the wake of the strikes.

The Lebanese launches triggered warning sirens in some areas of Israel near the border and communities within 2.5 miles were instructed to open safety shelters, but no injuries were reported.

The rivals have their own history – as Israel fought a 2006 war against Hezbollah guerrillas, who hold sway in the south of the country.

A Lebanese protester, a member of Hezbollah, was killed by Israeli fire last week while protesting at the Lebanese border.

Hezbollah guerillas are thought to have deployed the rockets at around 11.30pm from the area of Rashaya Al Foukhar, south Lebanon[/caption]

Rockets are launched towards Israel from the southern Gaza Strip[/caption]

Rubble strewn on the streets of Gaza after Israeli airstrikes[/caption]

That came after a number of young demonstrators had tried to cross into the northern Israeli border town of Metula, according to Lebanese state media.

Last Thursday, three rockets were fired from southern Lebanon near the Palestinian refugee camp of Rashidiyeh toward Israel.

Over 200 people have been killed in the exchange of fire between armed groups in the Gaza Strip and the Israeli army.

Hamas have threatened Israel with a revenge rocket assault on Tel Aviv after “150 terrorists” were wiped out as of last night during the fighting on the Gaza Strip.

Hopes of a ceasefire have dwindled after Israel “intensified its aggression” and attacked another tower block housing the Hamas government’s interior ministry on Monday.

The Israel Defense Forces announced it had killed over 150 terrorist operatives, the majority from Hamas, and that they had destroyed nine miles of underground tunnels in Gaza City.

But Hamas have not taken the relentless airstrikes lightly – and vowed to “put Tel Aviv back among our rockets’ targets.

“You have been warned,” a statement from the militant group chillingly read.

According to officials, 212 Palestinians have reportedly been killed in Gaza, including at least 61 children, while over 1,400 have been injured.

Israel has continued air strikes launched last week in response to rocket fire from Hamas towards Jerusalem after violence at the flashpoint al-Aqsa Mosque compound.

Pubs in Scotland could close in DAYS as Indian variant spreads

Pubs, restaurants & shops could be SHUT under local lockdown tiers

The strikes reportedly destroyed the homes of nine Hamas leaders, weapons stores and a network of terror tunnels in just 20 minutes.

The air force says more than 2,800 rockets have been fired from the Gaza Strip at Israel.