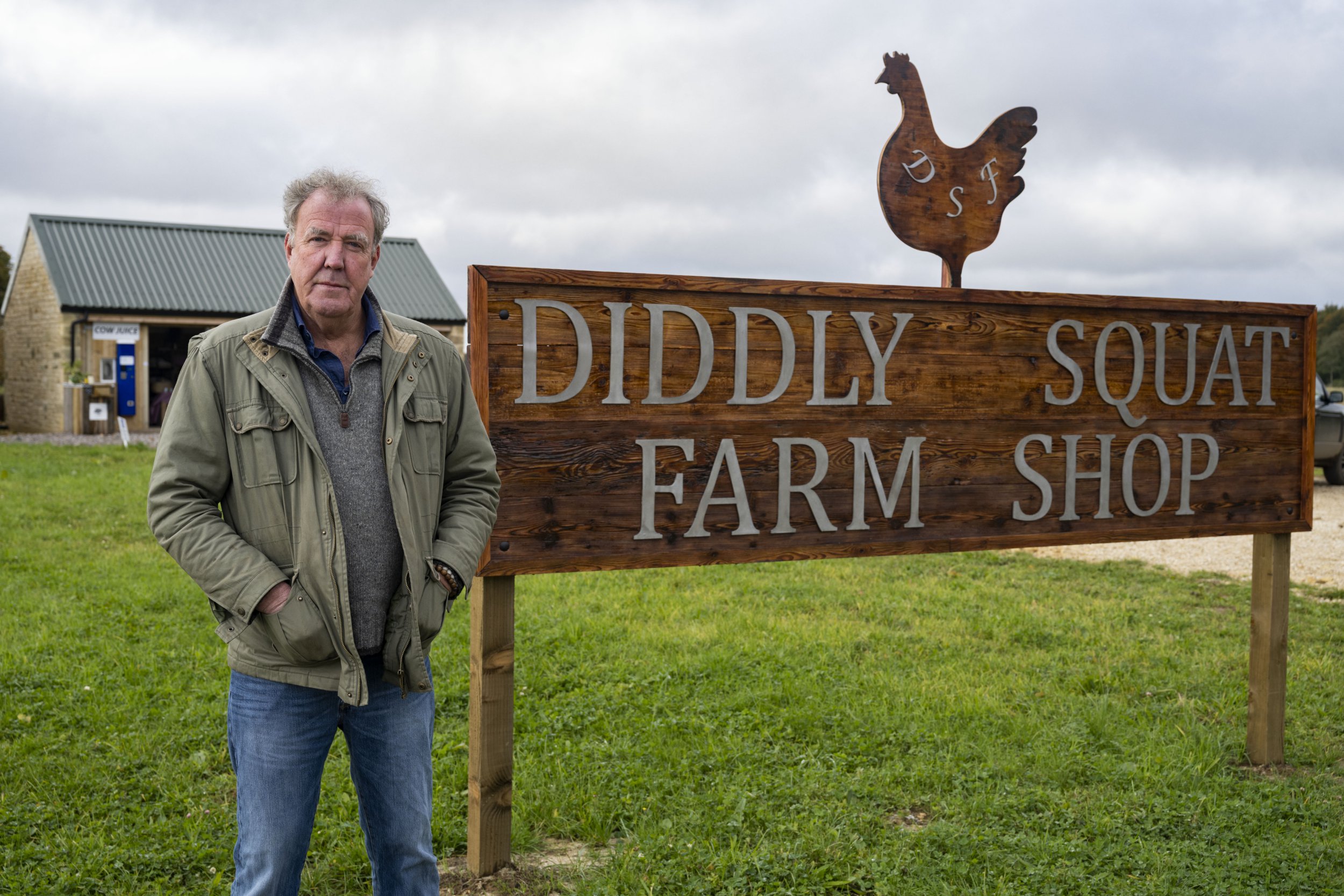 Maybe God was trying to tell Jeremy Clarkson something.

Only two years into his budding career as a farmer and he’s had to contend with biblical floods, a global pandemic, and his own seemingly endless incompetence.

Suddenly, being forced to spend time with James May and Richard Hammond has its appeals…

‘All of it was out of my comfort zone. I honestly thought farming was as simple as: you put seeds in the ground, weather happens and then you grow food,’ says Clarkson, pausing briefly for that famous deadpan delivery. ‘But that’s just not true, it’s incredibly complicated.’

Clarkson’s Farm, launching on Amazon Prime Video this Friday, is an unflinching look at just what goes into making a successful farm. Well, kind of.

Don’t get me wrong, there are the usual Clarkson pratfalls – a ludicrously huge Lamborghini tractor being a running joke – but there’s a sincerity to this show that sets it apart from his past efforts.

You get the impression he cares deeply about Diddly Squat, his 1,000-
acre Cotswolds farm. It’s this passion that meant quitting was not an option.

‘At no point did I think about giving up and I’m not thinking about giving up now,’ he says. ‘It’s hard work, it’s cold, my fingers ache and I’m always out of breath because I’m forever at the bottom of the hill when I need to be at the top of it. But I really, really love it.’

He’s certainly not doing things the easy way. Throughout the series we see Clarkson, who recently turned 61, getting stuck into the nitty-gritty that comes with running a farm, whether behind the wheel of a tractor or very much up the behind of a sheep.

And it’s with the sheep that we even see a softer side to the obstinate Yorkshireman – not that he’ll show it too readily.

‘Sheep, look, I didn’t fall in love with them,’ he says. ‘In fact, I developed a deep-rooted hatred for them. But as individuals, those three that had to go off to the abattoir, well, that was a sad day. Nobody likes to hurt an animal.

‘Farming gets a bad press but the truth is, farmers want to look after nature and they want to look after their animals – and I’m no different. I wanted them to have a happy life. But they had to go off to the abattoir and that was upsetting. But it’s a business. That’s how the business works.’

With Hammond and May absent, it falls to young farmhand Kaleb Cooper to put Clarkson in his place – and he relishes it.

The Chipping Norton-born farmer spends half of his time on screen chiding Clarkson for doing something stupid and the other half wondering when he can get a perm. The pair make for a fine double act, despite the age gap.

‘I’ve learned an enormous amount from Kaleb,’ says Clarkson. ‘There is a 40-year age gap but I’m quite young in my head for how old I am and he’s quite old. So I think we’re about the same.’

If you find Clarkson annoying, that’s exactly why you should be watching –
he just might make a prat of himself.

‘But so long as somebody hopes something, then that’s good TV. If you’re watching and you don’t care, then we’ve rather missed the point.

‘So even if you’re tuning in to see that big, fat f***er fall flat on his face, then that’s good enough for me.’

Clarkson’s Farm is on Amazon Prime Video from Friday

What is Erika Jayne’s net worth?