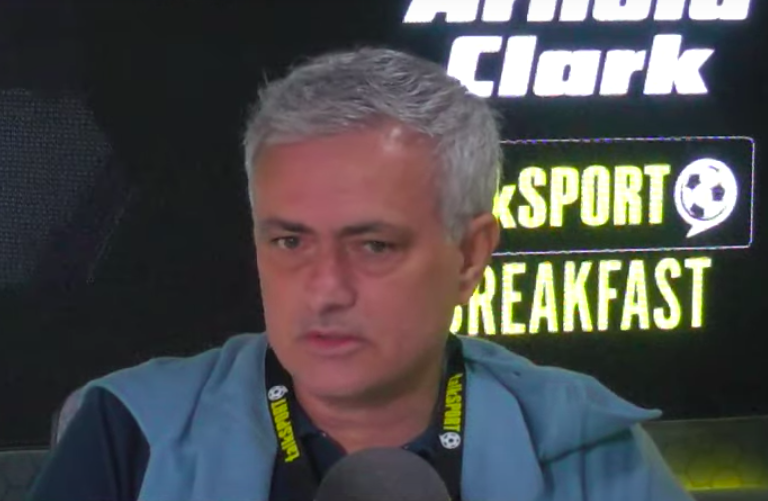 Jose Mourinho took aim at Luke Shaw and Marcus Rashford as he named his preferred England starting XI ahead of the side’s opening Euro 2020 clash with Croatia this weekend.

Both players, who Mourinho managed across his two-and-a-half year spell at Manchester United, are firmly in contention to secure a place in Gareth Southgate’s team at Wembley as the Three Lions look to get their tournament off to the perfect start in Group D.

At times it felt as if Shaw was used as a scapegoat by a ruthless Mourinho as his Old Trafford career appeared on the decline but the left-back has gone on to establish himself as a key man under Ole Gunnar Solskjaer and was named in the PFA Team of the Year for his outstanding performances this past season.

Rashford was also on the end of some strong criticism from Mourinho on occasions during the Portuguese’s tenure in the north west. However, the forward has since gone on record crediting the Special One with improving his game through ‘tough love’.

But neither Shaw or Rashford will be thanking Mourinho for the comments he made on talkSPORT this morning, with the newly appointed Roma boss selecting Ben Chilwell and Jack Grealish over the duo in his favoured Three Lions team.

‘I would go with [Dean] Henderson in goal,’ Mourinho began as he reeled off the side he would pick if he was Southgate this summer.

‘At centre-back, without [Harry] Maguire, I would go [John] Stones and [Tyrone] Mings. I think that [Conor] Coady is clearly a three-defenders defender.

‘The kid from Brighton [Ben White] is, for me, a very good player but he just arrived so it doesn’t make any sense to go direct.

‘I think Mings has good leadership qualities, he’s an aggressive guy, good personality and Stones is very fast to deal with space so I think Mings.

‘Right-backs, you can throw the coin and any one is perfect but I would say Kyle [Walker] because you need a little bit of… not just pace because [Reece] James also has it… but a little bit of experience and an older guy closes the space inside maybe better than James or [Kieran] Trippier so I’ll go with Kyle.

‘At left-back I will go with [Ben] Chilwell. I wouldn’t think twice and I would go with Chilwell. I know that he plays normally at Chelsea with five at the back but he’s intelligent, covers the space and diagonals inside very well, he’s dangerous in attack, he’s good in the air, he’s good on set-pieces, he can defend well possible long build-up from Croatia on the first phase.’

Asked whether he would even consider Shaw, Mourinho bluntly replied: ‘No.

‘I think he had a good season, clearly an evolution in terms of emotion, professionalism, clearly that.

‘But I think Chilwell has something more, especially with the ball, the way he thinks, very calm under pressure. I like Chilwell so I would go with this back-four.

‘I love [Jude] Bellingham but maybe I wouldn’t play him in the first game. I think he has fantastic potential.

‘To play with Rice I would say Bellingham would be perfect but maybe this first game maybe Kalvin Phillips with Rice maybe. But I would have doubts because Bellingham is the perfect player to play as the second midfielder with a guy like Rice.’

Mourinho waxed lyrical about Grealish – who he compared to Portuguese legend Luis Figo – and believes the in-form Aston Villa captain has to start on the left of England captain Harry Kane on Sunday.

And Mourinho feels Rashford should be omitted altogether if Grealish is given the nod on the left as he reckons the United attacker looks ‘completely lost’ and ‘broken’ on the opposite flank.

‘Harry Kane, untouchable. Then I think Grealish is untouchable and the best position for Grealish is coming from the left which creates a situation which is, for me, Rashford can only play there,’ he went on.

‘I think when Rashford plays on the right he is completely lost. His dynamics on the right are totally broken, he doesn’t find it. He’s very good on the left, attacking spaces. I see Harry dropping and him attacking the space behind but Grealish is tremendous. What he creates and the personality giving the ball… he reminds me a little bit of my Figo.

'Maybe he goes to Spurs next!' – Jose Mourinho 'very upset' with Chelsea star

‘I don’t like comparisons because I am comparing with a Golden Ball winner. Figo, I had him in different periods in my career. But I had him in his last season at Inter and even in this last season he was like: “Give me the ball and I resolve the problems for you!”

‘The way Grealish gets the ball, the personality, the way he attacks people, gets fouls, gets penalties, very powerful…

‘I like him very much so I would say Grealish on the left, [Mason] Mount as a No.10 and because I like a lot – but that’s something very personal – I like the wingers inverted.

‘I would play [Phil] Foden on the right. I would play Foden, Mount and Grealish. That is why I am saying Kalvin Phillips and Declan Rice.’

MORE : Reece James reveals he speaks with Chelsea legend ‘nearly every week’ to improve his game