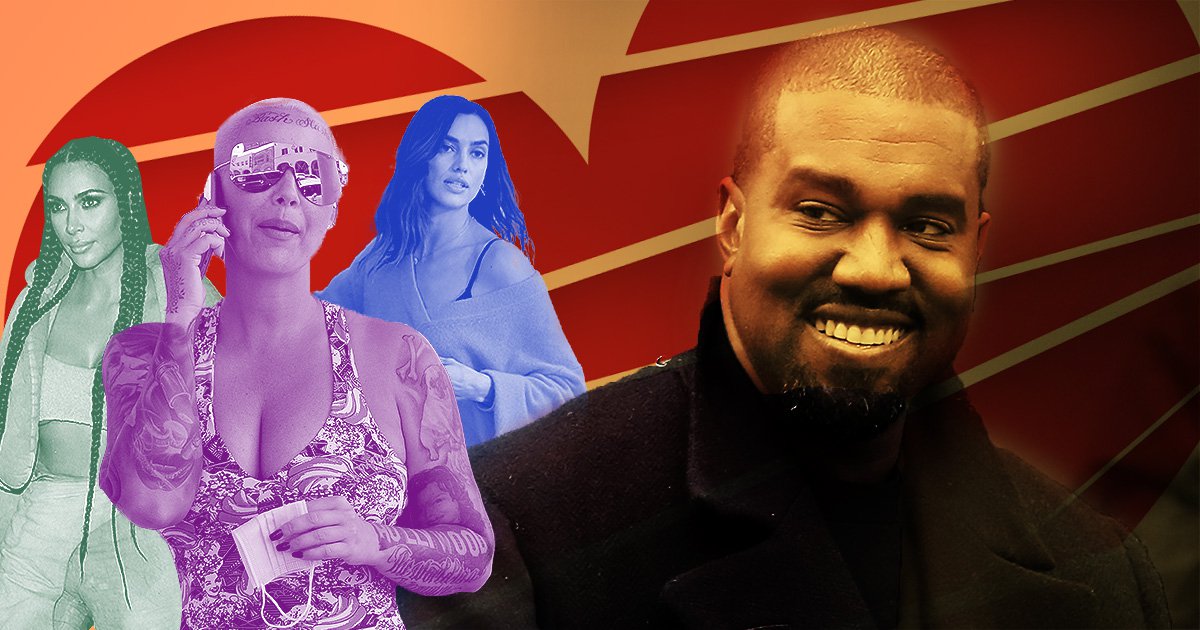 We thought after Kourtney Kardashian and Travis Barker, Andrew WK and Kat Dennings and the Bennifer renaissance was enough for our tiny minds to handle – but then came Kanye West and Irina Shayk.

The chaos of celebrity in 2021 continues.

Following rumours that Kanye, 44, had moved on from estranged wife Kim Kardashian with the supermodel, the rapper was pictured with Irina, 35, in France, before the pair touched down in New York together.

While the stars haven’t confirmed everything, it’s been speculated that the pair are coming for a sweet slice of that Bennifer attention with a new A-list romance.

This is far from the first of Kanye’s high-profile relationships, with the hip-hop legend having dated some of the world’s most famous women.

Before his big break, Kanye was dating his high school sweetheart Sumeke Rainey, and things were serious between the pair, with Kanye even pledging to marry her.

On the 2004 song Never Let Me Down from his debut album The College Dropout, Ye rapped: ‘Nothing sad as that day my girl’s father passed away / So I promised to Mr. Rainey I’m gonna marry your daughter.’

However, the couple had split when Kanye began topping the charts.

Kanye had an on-off relationship for a number of years, when the rapper popped the question in August 2006.

However, it wasn’t meant to be, and 18 months later, Kanye and fashion designer Alexis split up.

Their break-up followed the death of Kanye’s beloved mother Donda.

During a break from Alexis, Kanye dated Harlem Nights actress Brooke, and she accompanied him to the 2006 Grammy Awards.

However, just months later, they had split up, with Kanye reuniting with Alexis and proposing.

Brooke later told The Sun of their relationship: ‘I was very naive. I was a normal girl and in my life you meet a guy, you go on three dates and that’s your boyfriend. But he was a superstar and it got too much for me to handle.

In 2008, Kanye first saw model and dancer Amber Rose in a Ludacris video, and the pair went on to date for two years.

However, in 2010, they split up, with Amber going on to marry Wiz Khalifa, and their break-up continues to be messy a decade on.
In 2015, Kanye famously made sexist comments about his ex, saying: ‘[Amber] is just soaking up the moment. If Kim had dated me when I first wanted to be with her, there wouldn’t be an Amber Rose, you know what I’m saying.’

He also denied Amber’s claim that future wife Kim was sending him naked pictures when they were still together, telling The Breakfast Club: ‘I wish. I would have gladly, happily have liked her. By the way, it’s very hard for a woman to want to be with someone that’s with Amber Rose. So she wasn’t sending nothing, you know what I’m saying? I had to take 30 showers before I got with Kim.’

Amber forgave Kanye for the comment, but has since accused the Power star of bullying her over the last 10 years, saying on the No Jumper podcast: ‘That’s what narcissists do, right? You share two years with someone, you take them around the world, you buy the jewellery, you shout-out to the world how much you love them and how much fun you have with this person and then the person decides that this is not what they want their life to be.

‘I opted out. I don’t want my life to be like that. I’m not that type of person.

‘I don’t know if he says things to make his wife more comfortable. But to slut-shame me and say you needed 30 showers, it’s like, bro. Took me around the world, since when do you need 30 showers? I could see if it was a one-night thing and you want to slut-shame me, OK, but you’ve done a lot for me.’

Selita and Kanye dated for several months in 2010, with the model starring in the rapper’s video for Runaway the same year.

She attended a number of red carpet events and galas with Kanye, but their romance fizzled out.

The big one. Kanye and Kim had been friends for nearly a decade when they finally went public with their relationship in 2012, and became showbiz’s hottest couple.

Later that year, they confirmed they were expecting their first child together, and in June 2013, they welcomed baby North, a few months after Kim’s divorce from Kris Humphries was finalised.

Kanye proposed in October 2013 and the couple tied the knot in Florence the following year, before going on to welcome three more children together – Saint, Chicago and Psalm.

Kimye were everywhere, whether it was packing on the PDA in Kanye’s Bound 2 video, stealing the spotlight at the Met Gala or tag-teaming in a feud with Taylor Swift.

However, last year, it was rumoured that their marriage was in trouble as Kanye posted concerning tweets about his wife and made comments about Kim allegedly considering having an abortion on her first pregnancy at his presidential campaign launch, during a bipolar episode.

In February, it was confirmed that Kim had filed for divorce after six years of marriage, but the exes are co-parenting their four children, and Kim said she would love Kanye forever in a sweet birthday message earlier this week.

Irina and Kanye go way back, with the supermodel having starred as Yeezy’s muse in the 2010 video for Power.

But their apparent relationship has taken many people by surprise.

Like Kanye, Irina has had a number of high-profile relationships in the past, having dated Cristiano Ronaldo for six years until their split in 2015.

The same year, the Russian star began dating Bradley Cooper, and they welcomed a daughter, Lea De Seine, in 2017.

MORE : Now Amazon’s bought MGM, they have the perfect opportunity to introduce classic films to a wider audience

MORE : Kourtney Kardashian admits she’d still be with Scott Disick if not for Keeping Up With The Kardashians fame