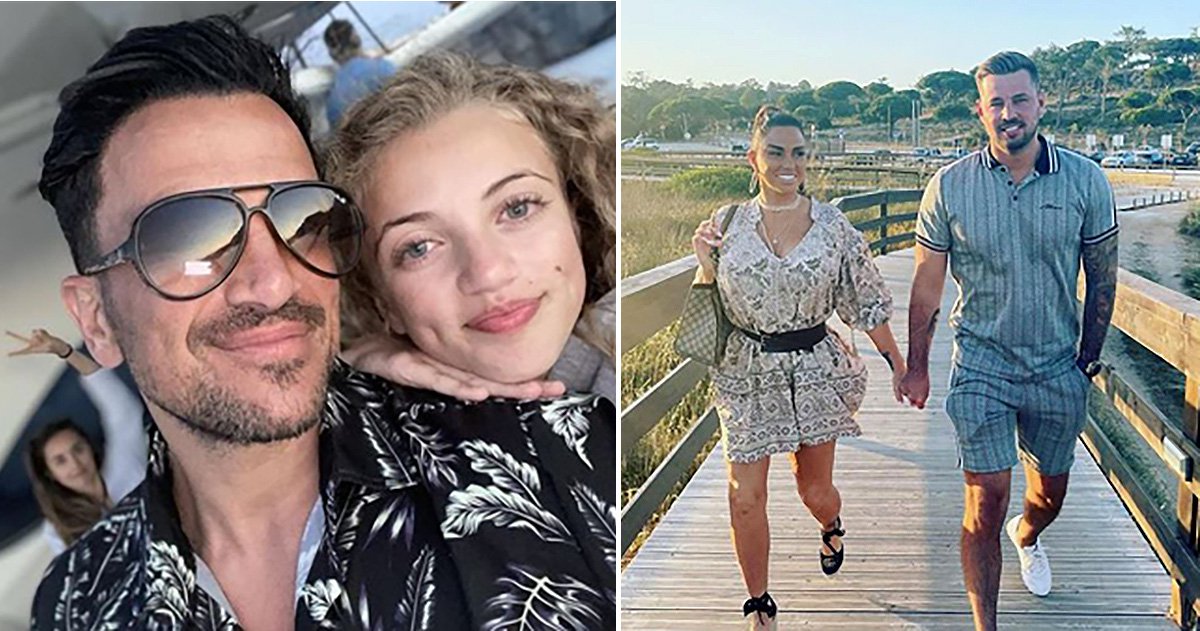 Katie Price and ex-husband Peter Andre reportedly met up while on holiday in Portugal so she could have a ‘really nice’ catch-up with their children Junior, 15, and Princess, 13.

Katie, 42, was married to the Mysterious Girl singer for four years until 2009 after falling for each other on I’m A Celebrity…Get Me Out Of Here! Since their divorce, the former glamour model has remarried twice and is engaged to former Love Island star Carl Woods, while Pete, 48, is happily married to NHS doctor wife Emily.

The pair co-parent their two children, and as they were both in the Algarve with their families recently, the singer, 48, is said to have taken them to see Katie.

According to OK!: ‘Peter and Katie were both in Portugal at the same time and Katie wanted to see the kids so of course Pete took them to see her.

‘Pete’s a nice guy and it’s very important for the kids. They all sat and had coffee and it was really nice.’

It came as Katie and Carl jetted out to Portugal for a ‘baby making’ holiday as the Loose Women star gets cracking on trying to have her sixth child.

Katie has made no secret of her desire to become a mum again, and recently revealed she has started IVF so her mum Amy – who is terminally ill – can see her new grandchild.

The former glamour model hopes to have two kids with fiancé Carl, making her a mum of seven.

Katie told The Sun: ‘We’re going to call the baby Miracle. I’m doing this for my mum. She told me to have IVF so she can see us have kids. It will break my heart if she can’t.’

In a recent interview she defended her eighth engagement to Carl insisting that she is in a completely different place in her life now than she was before.

Katie declared: ‘It will be completely different. My dress will be different, I will look different and my mind is different.

‘I know so many people out there are like, “Oh yeah, we’ve heard this before”. Yeah, because I’ve rushed into things so much, made wrong choices but my head wasn’t right. My head is so right now, I’m a different person.’

Metro.co.uk has contacted reps for Katie and Peter for comment.

MORE : Teyana Taylor is officially the sexiest woman alive, and no arguments here

Friends: 7 most controversial episodes that have aged very badly

Sinead O’Connor claims Prince was a ‘devil worshipper’: ‘He could make s**t move around the room’