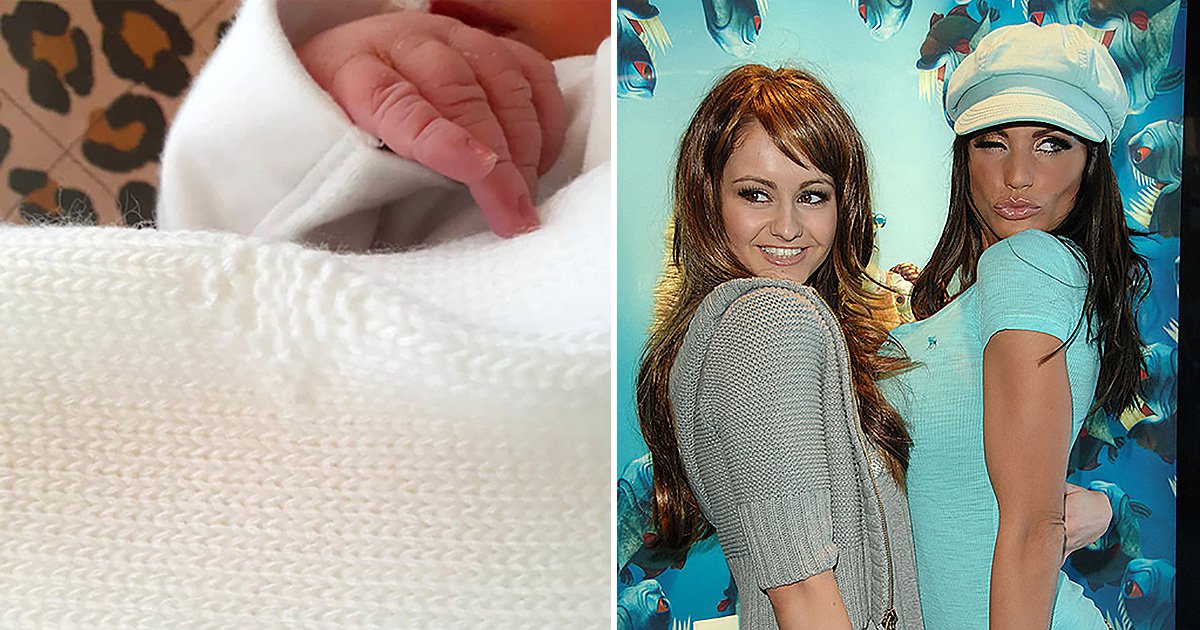 Katie Price’s sister Sophie has welcomed her first baby, giving birth to a boy, as her older sister shared how ‘proud’ she was of the new mum.

Sophie, 31, revealed the news on Instagram, posting a picture of her newborn son’s tiny hand and a peek at a cream romper and knitted blanket.

It’s the first baby for her and her partner Harry Brooks, and in the caption they shared the sweet name they’ve chosen for their son.

She wrote: ‘We’re finally home..Harry, me and our little Albert,’ and posted a blue heart emoji alongside the message.

Katie, who shares mum Amy with Sophie, was unable to visit her sister in hospital to welcome Albert due to Covid-19 restrictions, but posted her own tribute to the mother and son on her Instagram page.

Alongside a photo of baby Albert’s arm with his hospital wristband, she wrote: ‘So proud of my sister @sophie_pricey and Harry unfortunately I wasn’t able to be at the hospital because of covid but were with them all the way through !

‘I love you sophie and Harry and my gorgeous nephew Albert ❤️’

She then joked about what the new parents were in for, finishing with: ‘welcome to the parent world and lack of sleep 🤣🤣🤣🤣’

Ahead of Albert’s arrival, Sophie was keeping fans up-to-date with the couple’s preparation for his arrival, sharing photos of their immaculate, vintage-inspired south east London home.

In the last snap posted before she gave birth, Sophie shared ‘one of [her] favourite rooms’, revealing a soft wicker changing station and three gorgeous tops awaiting baby Albert, as well as a collection of books.

The couple announced they were expecting their first child back in November, and Sophie posted regular bump updates throughout her pregnancy.

Katie and Sophie’s relatives also rushed to congratulate the first-time mum, with Katie’s daughter Princess, 13, posting: ‘My gorgeous cousin’, and a heart emoji.

Kieran and his fiancée Michelle Penticost are also expecting a baby boy, having held a gender reveal party over the bank holiday weekend.

Although Sophie stays out of the spotlight, gaining a history degree in 2016, she has built up a following of over 47,000 on Instagram.

The sisters have different fathers after Katie’s dad, Ray Infield, left when his daughter was four.

Amy went on to marry and have baby Sophie with builder Paul Price.

Sophie’s news comes as Katie and her Carl Woods have spoken about starting IVF in order to conceive the former glamour model’s sixth child.

The pair jetted off on a second trip to green-listed Portugal, less than two weeks after their first, on what Katie branded a ‘baby making’ break.

Katie is already mum to Harvey, 18, Junior, 15, Princess, 13, Jett, seven, and six-year-old Bunny, but she hopes to give Carl his first child.

MORE : Michelle Heaton thanks Katie Price for intervention that ‘saved her life’ as she leaves rehab

Kanye West album Donda: Release date, tracklist and everything you need to know