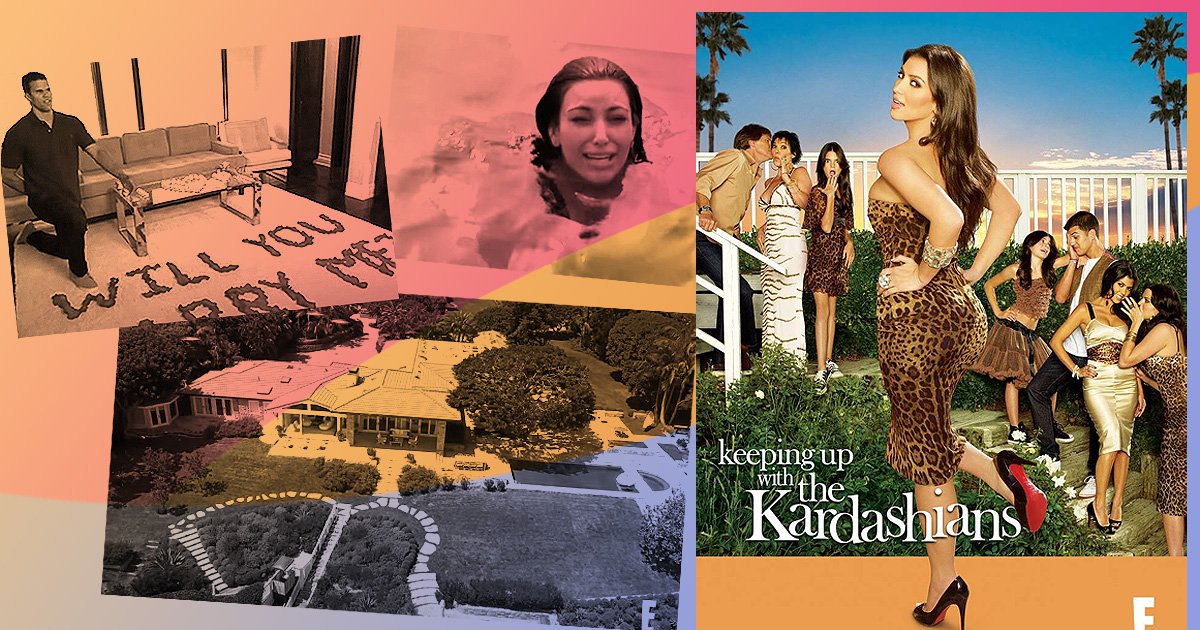 Keeping Up With The Kardashians will be giving us one final dose of drama this Thursday as the iconic reality series comes to an end.

No doubt through tears, viewers will say farewell to Kim, Kourtney, Khloe, Kris, Kylie and Kendall – and not forgetting Scott Disick – as the finale episode of their staple E! show airs.

Over the past 14 years, the Kardashian-Jenner clan have given us a front row seat to all their high-key dramas from shocking marriage splits to pulling out their own babies from their vaginas. There’s nothing quite like the reality of living like a Kardashian.

However, it takes some work to present the level of entertainment we’ve seen on KUWTK and sometimes – just sometimes – all has not been what it seemed.

To celebrate the end of the pop culture phenomenon, here’s a look at the secrets of KUWTK and behind-the-scenes tidbits you might not have known.

Over the years, we’ve tried to mimic Khloe’s famous cookie jar presentation and can recognise the staircase in Kris’ house from earlier seasons in a heartbeat.

However, many of the exterior shots of the properties aren’t actually theirs.

Production decided to use footage of random mansions instead when Kim experienced privacy issues in the early days.

Confirming this, Kim previously told a Twitter user: ‘When we film inside, that’s obviously our real home.

‘My old home in Beverly Hills was really my home and I would get people showing up at all hours ringing my gate and had to call the police on several occasions.’

There’s no doubt that an element of KUWTK – like most reality shows – is scripted or at least planned to ensure they actually capture certain moments for our pleasure.

The series has fallen under the microscope countless times for scenes that fans are convinced were staged, most notably in 2012.

OG fans will remember Kim and her mum Kris’ trip to Dubai and the moment where Kim opened up about marriage troubles in a car.

The trip took place in October but Kim and mum Kris were pictured outside a reported TV studio in Los Angeles in December – by which time she’d already split from the NBA star – wearing identical outfits to the ones they wore in the scene, sparking speculation that it was re-shot.

A source told the New York Daily News at the time: ‘This is what is called a pickup scene.

‘[It’s] done all of the time. There was a hole in the show’s storyline. All reality shows are staged.’

KUWTK’s executive producer Russell Jay is also reported to have admitted this in court transcripts in 2013.

Jay allegedly claimed that Kim asked to reshoot her reaction to second husband Kris Humphries popping the question so she could seem more ‘surprised’.

‘I remember, like, Kim – she didn’t know he was going to propose at that moment. And she came in and she was completely surprised, and I think she had a bad reaction or something and she was embarrassed,’ he reportedly said.

‘So she said can we just, like, have me come back in one more time and be, like, really surprised.’

Or, should that be not-so-free holidays?

It was previously claimed that E! has footed the bill for many of the luxury holidays the family has taken over the past decade, from Bora Bora to Thailand. However, in one recent season, Kourtney was stunned to reveal she’d received a hefty bill for their trip to Costa Rica.

‘Why am I being sent this other huge bill? Why isn’t production chipping in if we’re using it for the show?’ she complained in the episode.

Perhaps it was just an admin error.

It’s probably not a surprise that the Kardashian-Jenner clan have the production team sign non-disclosure agreements to protect those moments they don’t want to make it to air.

However, Kim confirmed the years of speculation in one swift tweet, writing: ‘Btw NDA’S for all!!!! #KUWTK.’

In similar fashion, E! are not able to air photos of people who haven’t given their permission.

Case in point, fans were confused when Tristan Thompson – who is a regular on the show – was suddenly a blurry figure in one episode.

Khloe explained: ‘We obviously didn’t do anything. He might not have signed a waiver to show those images. Why would I want to blur his face? I’m not hiding his identity LOL.’

It’s been said that the family film for 10-12 hours a day and the microphones don’t come off – even if they’re having a private moment in the loo.

Kourtney once told The Hollywood Reporter: ‘I remember in season 1 being like, “I have to go the bathroom”, and I’d cry in there as quietly as I could because I was still mic’d. I never want to cry in front of cameras.’

MORE : Kim Kardashian tells Kanye West ‘love u for life’ as she celebrates his 44th birthday amid divorce

MORE : Kim Kardashian has no regrets about sex tape storyline on Keeping Up With The Kardashians: ‘I wasn’t gonna hold back’