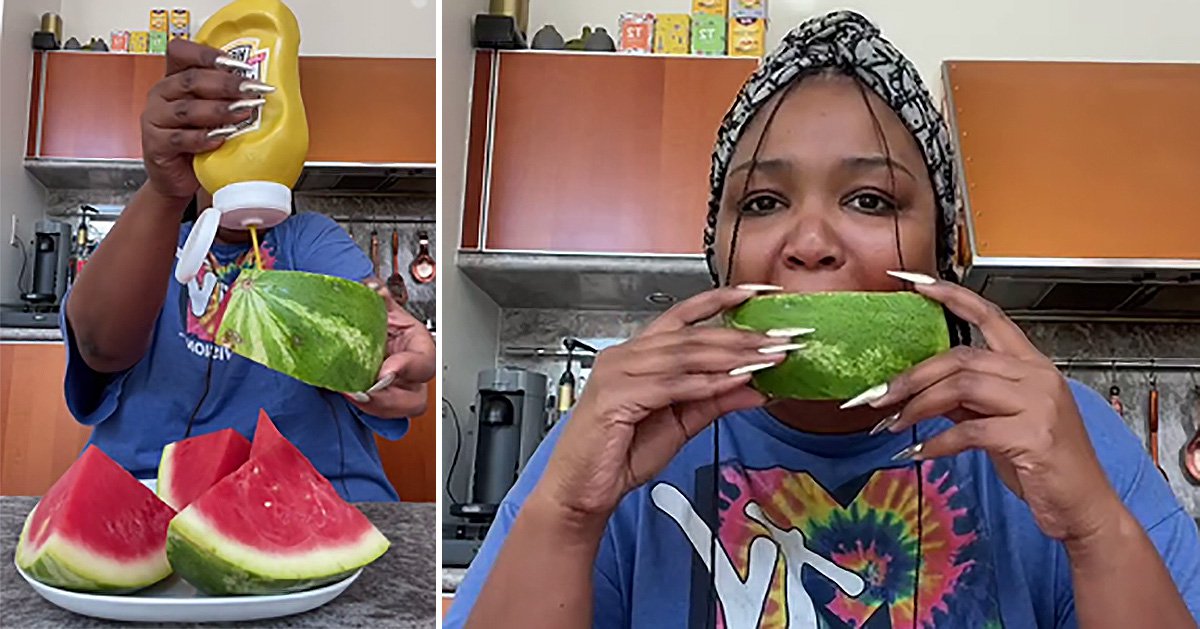 Lizzo is a champ after taking one for the team and trying the odd combination of watermelon and mustard, which has of course become a huge TikTok trend.

The Juice singer confused her taste pallette with the sweet and sour mixture after seeing it go viral on the social media app thanks to user @yayayayummy, who promised it tastes ‘so good’.

In her attempt at the challenge, Lizzo is seen getting out of bed, grabbing a full watermelon in her fridge and chopping it up into slices.

She then says in a dry manner: ‘Welcome to ‘Is It Buzzing Or Is It Disgusting?’

‘I’ve been seeing this s**t on the internet,’ she added.

After slathering mustard over the fruit slice, she is seen scrunching up her face before exclaiming: ‘I don’t understand… hold on.’

It couldn’t have been too bad as Lizzo then squirted even more mustard before giving it another try.

Somehow, we’re not sure this is what Harry Styles had in mind when he sang about watermelon sugar highs.

Naturally, Lizzo’s video garnered a confused response from fans, with one quipping: ‘I just spent a minute of my life watching Lizzo eat watermelon with mustard on it. Is this a peak or a low?’

Others tried the challenge themselves and it had a mixed review, with one TikToker revealing: ‘I saw lizzo eat watermelon and yellow mustard on tiktok so I tried it and I was very surprised at how good it acc was.’

One agreed and was prepared to take it a whole new level, stating: ‘The mustard and watermelon was good. Now I’m gonna add some tajin to all of it.’

However, one critic said: ‘If anyome was wondering if the watermelon with mustard thing lizzo tried was good, it’s not.’

Another who attempted the challenge: ‘My girlfriend decided to facetime me while I was trying the mustard and watermelon thing from tik tok and she was disturbed.’

Pretty perfectly summing up the general consensus, one social media user said: ‘I just want to kindly ask @lizzo and @grimmers wtf they were doing putting mustard on a f*****g watermelon?!?!!?

‘Why would you ruin such an amazing thing  !!!! Watermelon is good enough on its own dont need mustard s**t.’

In other words, we are not OK.

MORE : Lizzo insists the best body transformations ‘are the ones only you can see’ as she reveals intense workout

MORE : Lizzo looks good as hell in low cut tropical top on night out in Hollywood

More than 4,000 migrants have crossed the Channel so far this year

I’m A Celebrity Get Me Out Of Here! finally ‘set to return to Australian jungle as government gives approval’