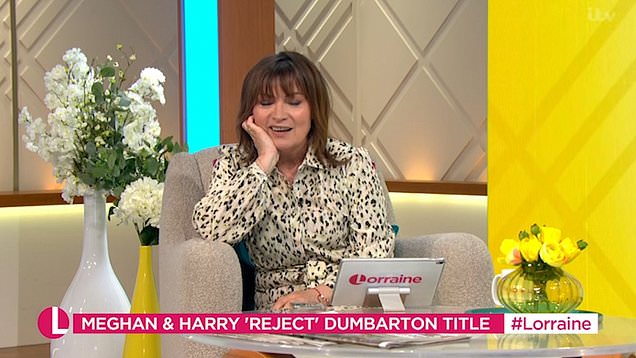 Lorraine Kelly has expressed her utter disbelief over the notion that Meghan Markle and Prince Harry rejected the title of the Earl of Dumbarton for their son Archie because it contained the word ‘dumb’ in it.

Earlier this week, the trailer for an upcoming Lifetime film about Meghan and Harry left many people baffled, with several dubbing the trailer for the TV movie ‘cringey’ and ‘awkward’.

Back in the real world, rumours regarding the Duke and Duchess of Sussex can often prove just as perplexing, a view that Lorraine held while discussing the latest talking point from the rumour mill.

A new report claims that Meghan and Harry chose for their two-year-old son Archie not to receive the title of Earl of Dumbarton for fear of him being bullied.

The report published in The Telegraph said that several sources backed up the claim, while a spokesperson for the Sussexes declined to comment.

Lorraine was having none of it, stating on her eponymous ITV show that she ‘cannot believe that’s true’.

‘Now I just don’t understand this. This is very surreal news today, but it is being claimed that Harry and Meghan rejected the title of Earl of Dumbarton for their son Archie because it contained the word dumb in it,’ she said.

‘I mean, come on. Come on, I just, I cannot believe that that’s true. I mean, there’s dumb and there’s dumb. And that can’t be right, that cannot be right.’

Lorraine put her hands up to emphasise her disbelief, as she continued saying: ‘No. Absolutely not.’

‘Is this a joke?’: Critics lose it over ‘cringeworthy’ Harry and Meghan movie trailer

Earlier this month, Lorraine admitted that she’s ‘had enough’ with Meghan and Harry conducting interviews, as the California-based couple take some time off work to spend quality time with their newborn daughter, Lilibet Diana.

‘Well, that’s good that they’ve got [Meghan’s mum Doria] there for babysitting and it’s good that they’re taking some time off, no more interviews please, we’ve had enough now,’ she said in response to the news that the Sussexes were taking five months off work.

Why was John McAfee on the run?