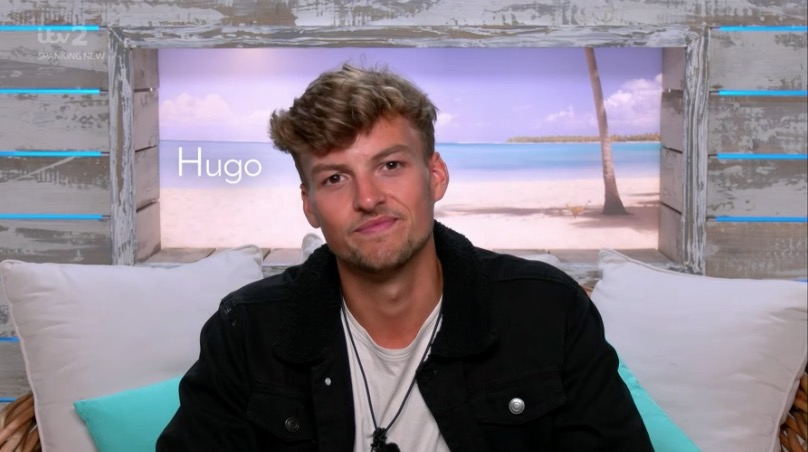 Love Island fans are desperate for Hugo Hammond to find love in the villa, with several left ‘crying’ after he was captured pining over the connection that his fellow islanders Liberty Poole and Jake Cornish share.

On the latest episode of the ITV2 reality show, Hugo watched during the day as Liberty and Jake worked up a sweat boxing in the gym area of the lavish villa.

As he sat down with Toby Aromolaran on the bean bags, Hugo remarked: ‘I just want that mate, to be honest. Is that too much to ask?’

Hugo hasn’t had the best luck on Love Island so far, failing to form a romantic connection with anyone and even being left out during a couple’s challenge.

The PE teacher’s observation over Liberty and Jake pulled at the heartstrings of numerous viewers, with one tweeting: ‘I’m gonna cry someone send Hugo a girl.’

‘When Hugo said ‘I just want that, is that too much to ask?’ MY HEARTTTTT so do I Hugo me too,’ another said.

‘Hugo saying “I just want that tbh” MY HEART,’ someone else wrote, while another stated: ‘Someone needs to go in there and tell Hugo how much the UK public love him.’

While Hugo has been fairly unlucky in love on the series, he hasn’t been completely void of chances.

After partnering up with Sharon Gaffka for a second time as a friendship couple, Sharon admitted that she might have started to view Hugo in a romantic light.

However, Hugo shut down any possibility of them exploring a possible romance, telling her that he views her as a ‘little sister’.

Fortunately for Sharon, another bombshell is entering the villa tonight, with new boy Danny taking Kaz Kamwi and one of the other girls out for a date.

Will Kaz finally find her Prince Charming? Or could Sharon capture his heart?

Who is AJ Bunker from Love Island 2021? Age, job and Instagram

Elsewhere, Lucinda Strafford, who was initially distraught that Brad McClelland had been dumped from the island, seems as though she’s already getting over her romantic fling.

Aaron Francis has expressed interest in getting to know her better, and it appears that the feeling may be mutual.

Love Island returns tomorrow at 9pm on ITV2 and is available to watch on ITV2.

MORE : Love Island 2021: Chloe Burrows has already made a big power move on AJ Bunker – body language expert explains what you might have missed

Progress of three in four disabled kids has been hit by the pandemic, study finds

Demi Lovato says they feel sexiest in the bathtub: ‘No makeup, no extensions, no lashes … naked’