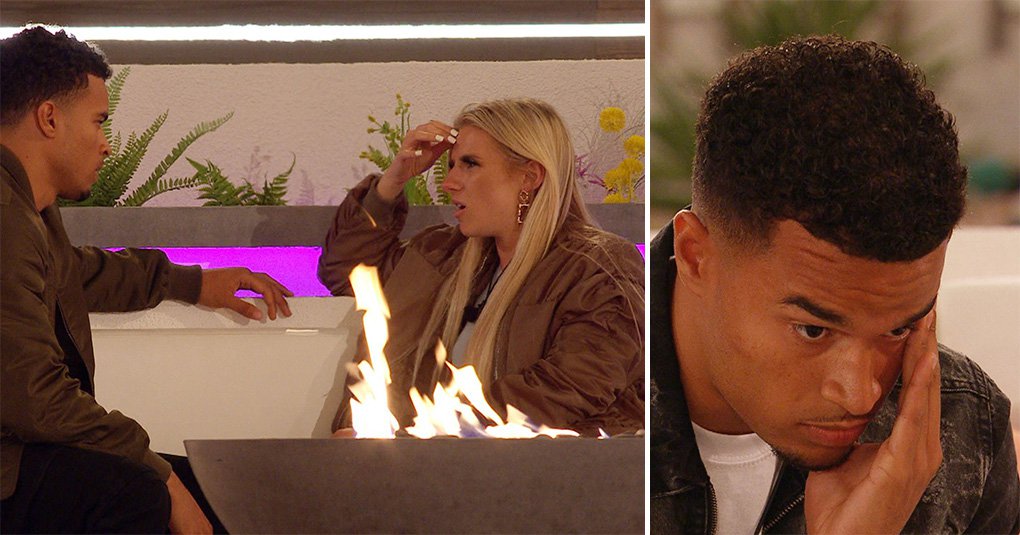 Love Island’s most divisive couple Chloe Burrows and Toby Aromolaran could be finished for good tonight as another twist comes right in the aftermath of a crushing row.

After new bombshell Abigail Rawlings burst into the villa and set her sights on Toby, his eyes wandered. Then tonight, they’re linking arms in front of Chloe and all hell breaks loose.

After that painfully awkward hug last night, Toby does little to make things better with Chloe.

Abigail pulls Toby for a chat, asks him to link arms and urges him to rethink his couple.

Spotting her man and Abi walking off hand in hand, Chloe loses it.

‘It should have been shut down if you were that interested me and that’s obviously not what happened. You’re linking arms in front of me. The annoying flirting. That’s disrespectful.

‘Do you see any of the other boys doing that? It’s laughable now Toby.’

Toby hits back: ‘It’s not like I’ve kissed a girl, do you know what I mean? If you want it to go long term you’re going to have to get tested.’

Who is Georgia Townend from Love Island?

‘It’s not a test for me, it’s for you and you failed,’ explains Chloe. ‘If it was me I would have shut it down. Where my head was at that’s obviously not where your head was at. You should have told me earlier you were interested like that.’

And just like that, Faye received a text which reads: ‘Islanders, it’s now time to recouple! The boys will each choose which girl they want to couple up with and the girl not chosen to be in a couple will be dumped from the Island. Please gather round the fire pit immediately. #bigcall #ifyouknowyouknow”.’

But who will Toby choose?

All will be revealed when Love Island continues tonight at 9pm on ITV2.

Schoolboy, 15, took his own life after heartache over ‘first love’ and ‘bullying threats on Snapchat’