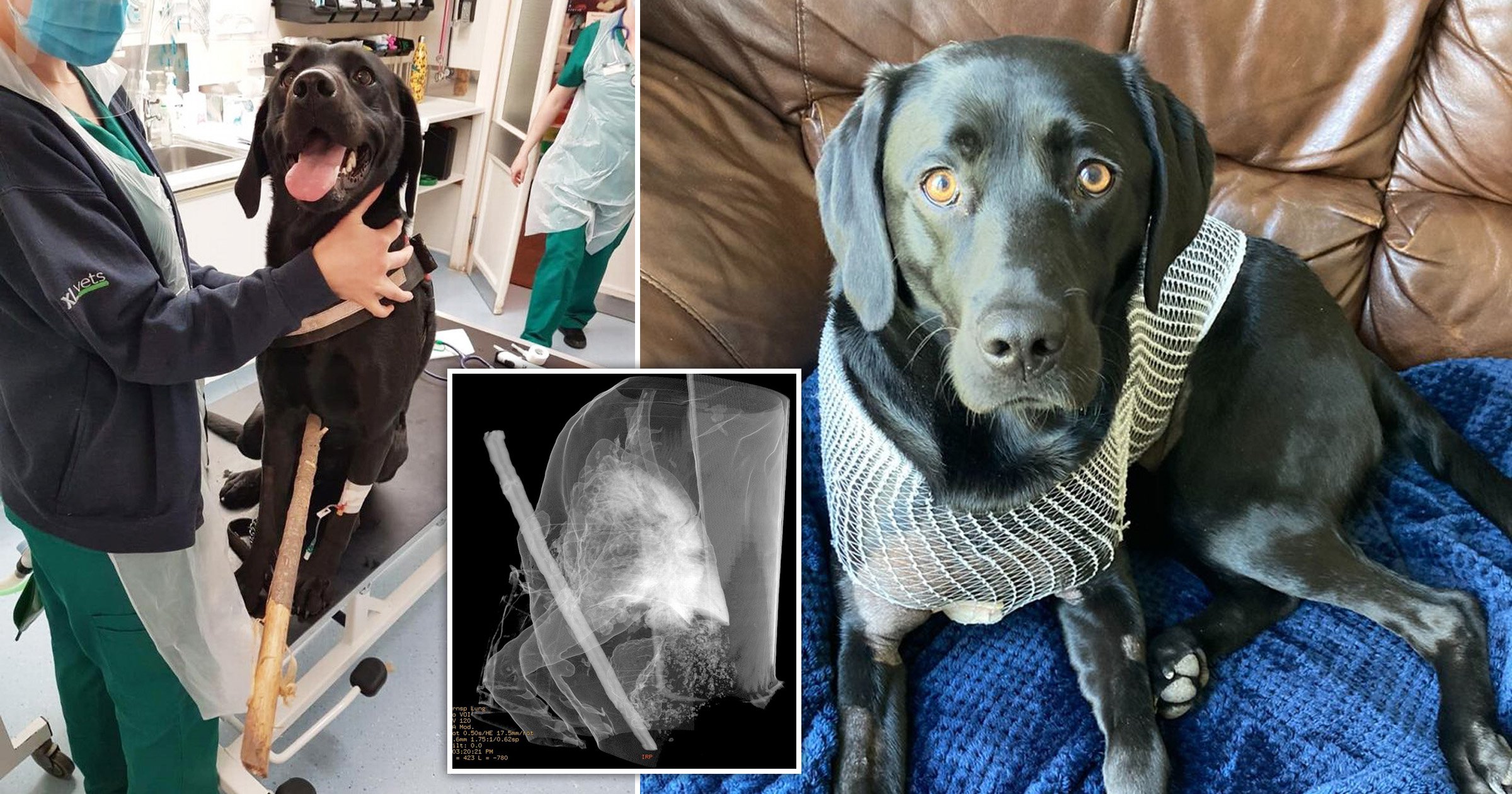 A dog has been called ‘Britain’s luckiest Labrador’ after miraculously surviving being speared with a tree branch 15 inches inside her chest.

Molly, who is 17 months old, was chasing a ball down a hill when she accidentally ran into the metre-long branch.

Owner Amy Gaunt, from Burton-on-Trent, rushed over when she heard the dog’s howls of agony and found the branch sticking out of the black dog’s chest.

‘Her favourite thing in the world is her ball, and that day she chased after it with her usual gusto,’ Amy said.

‘She’s such an energetic dog and runs so fast, but unfortunately the stick got in her way as she pounced to collect her ball.

‘The sound of her squeal was horrific and we knew straight away that something was dreadfully wrong.

‘She calmed down a lot when we reached her, and as my partner Ben and I had grown up with dogs we knew we needed to leave the stick in and get her to a vet immediately.’

Molly was rushed to Scarsdale Vets, in Stapenhill, for emergency treatment.

After being assessed by vets she was transferred to Pride Veterinary Centre in Derby, where the stick was removed in a two-hour operation.

Scans of the injury revealed the branch had sliced 15 inches inside Molly’s chest – but someone went beneath her lungs and liver and missed all her major organs and arteries.

Mark Longley, a European specialist in small animal surgery, praised her owners for leaving the stick in place, which prevented any further injury.

‘Amazingly, Molly was pretty stable on arrival and whilst her chest sounded fine and there were no worrying observations other than the obvious,’ he said.

‘There was serious potential for there to be some life-threatening injuries if the stick wasn’t dealt with urgently, such as trauma to her lungs, liver and for the blood supply to her intestinal tract to be damaged.

‘Molly is an incredibly lucky dog and her recovery was nothing short of remarkable – the next day you’d think nothing had happened.

‘She is lucky to be alive – if the stick had moved just a few centimetres either way or hit any of her vital organs or major blood vessels, it’s unlikely she would have made it to Pride in the first place.’

Molly stayed at the centre for five days, but then returned home after observation.

Vets say there are no signs of infection or adverse effects of trauma.

Shelters are bracing for an influx of abandoned 'pandemic puppies'

She has now made an almost full recovery, and is back to running around her garden with her owners.

Amy said: ‘As you can imagine, Molly, Ben and I were all very distressed, but once we reached Stapenhill and then Pride we knew she would be well taken care of.

‘We are so grateful to Jen, Mark and everyone else who treated Molly for taking the best care of her throughout her treatment.

‘We love having her being back and home with us, and are so relieved that she has recovered so quickly.’

Finance controller dad, 64, hid £500,000 gambling debt from family – who only found out when he was JAILED