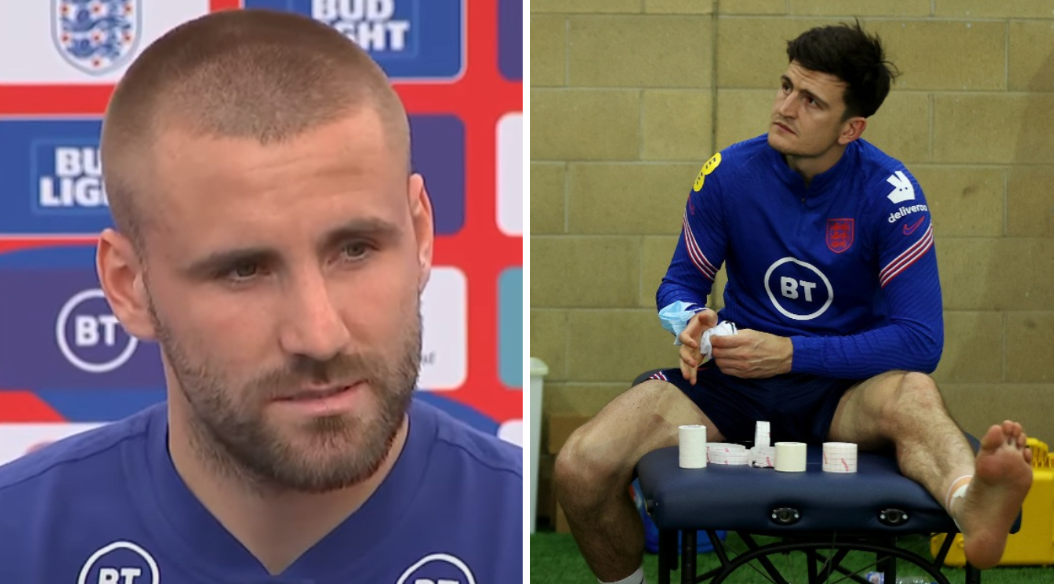 Luke Shaw says there have been ‘positive signs’ that Harry Maguire looks to be on his way back to full fitness ahead of England’s European Championships opener with Croatia.

And while Gareth Southgate named Maguire in his 26-man squad, the defender played no part in either of the Three Lions’ warm-up matches against Austria and Romania and is a major doubt for the start of the tournament.

Southgate will have been relieved to see Maguire stepping up his rehabilitation over the last few days but widespread reports suggest Sunday’s encounter with Croatia at Wembley will come too soon for the centre-back.

There are hopes the United captain could be available for England’s following Group D matches with Scotland and the Czech Republic.

‘Of course I think he’s a massive part of this squad whether he’s playing or not,’ England and United left-back Shaw told reporters when asked for an update on Maguire’s recovery.

‘I haven’t really spoken to him too much about his injury. Obviously I don’t want to pepper him with questions.

‘Obviously he’s going along with his rehab, of course he’s getting better day in, day out, so there’s positive signs.

‘But I couldn’t say when I think he will be back. Of course we would like him to be back as soon as possible but that’s down to him and the physio.

‘We’ll leave them to do their work and primarily focus on who is fit and available and be ready for the first game.’

Shaw insists he will be ‘100 per cent’ behind the team even if Southgate opts for Chelsea’s Ben Chilwell over him at left-back.

‘I never really look into the numbers. It’s down to Gareth, what he picks,’ he added.

‘I think there’s competition all over the place which is brilliant for him.

‘He’s going to have tough decisions, not just in my position but of course all over the park.

‘We’ve just got to keep working hard, keeping showing him what we can do and no matter what happens I will be with the team fully 100 per cent, doing everything I can to help them whether I’m playing or not.’

The former Southampton full-back believes England making it to the World Cup semi-finals back in 2018 has given the squad a ‘taste’ for greater success.

‘You’re always watching tournaments. Obviously I can’t remember when my first one was but we always had it on in our front room,’ he went on.

‘My mum and dad and especially my dad was always watching it and it’s unreal to watch the tournaments and be a part of one.

‘Obviously I was one of them watching the World Cup when they were in Russia. To see how good they did, to see how much the fans were involved in it, it was very inspiring to see all that and we want to taste more of that.

‘That most important thing is making the country proud.’

MORE : Manchester United fear Paul Pogba is running his contract down to leave on free transfer in 2022