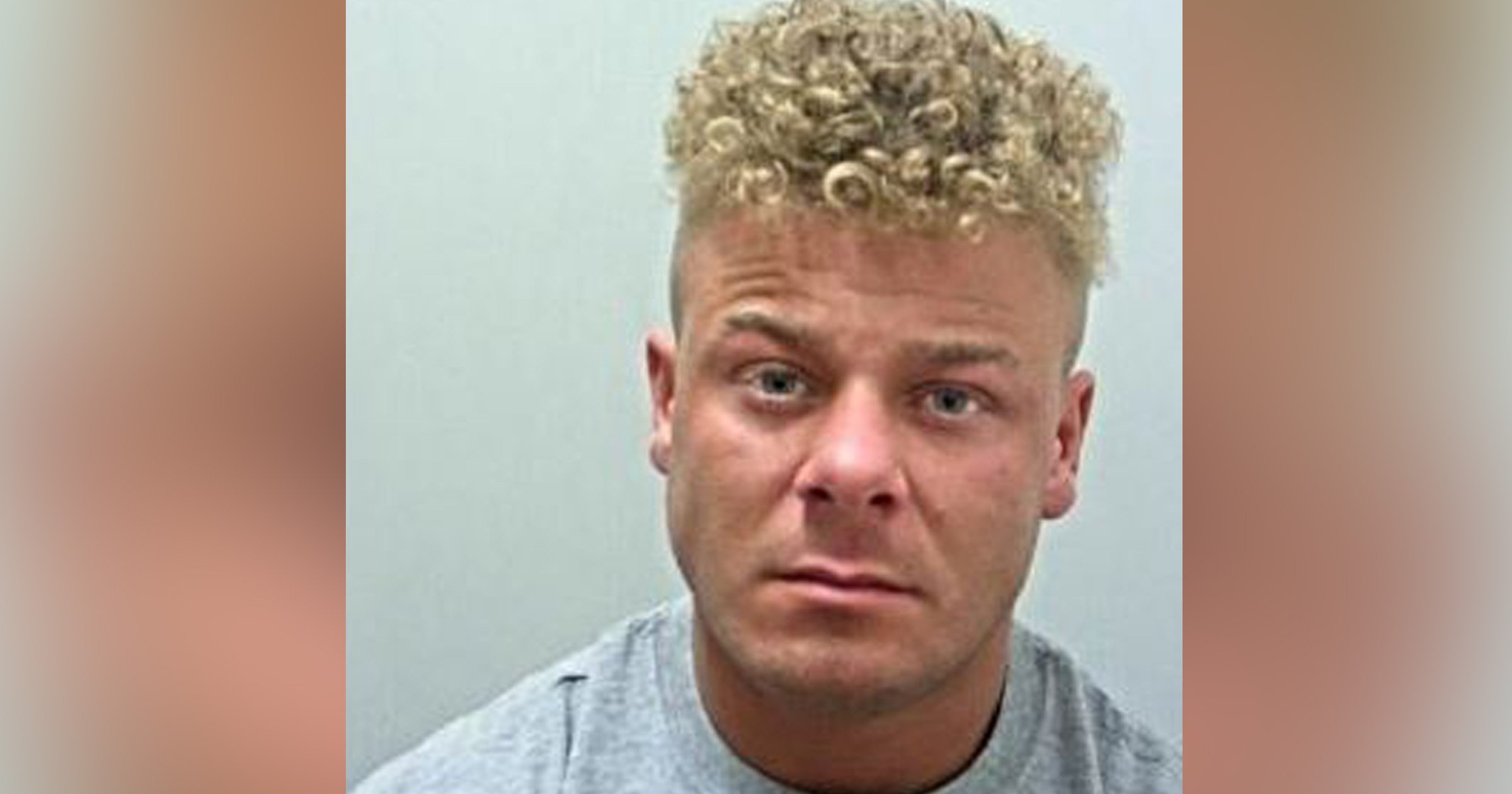 A drug-fuelled man who lured the mother of his child to a meeting and stabbed her in the face and back in a ‘frenzied attack’ with a ‘Rambo’ hunting knife has been jailed.

Levi Davidson, 25, told his then partner Kayleigh Flanagan, 22, that he wanted to kill her and that he would be ‘happy to go to prison’ if it meant she would be with no one else.

Preston crown court heard how Davidson tried to murder Miss Flanagan at his parents’ home in Blackburn, Lancashire, on Octover 5, 2020.

Davidson was ‘consumed with jealousy’ and paranoid that Miss Flanagan was cheating on him before the brutal attack, the court heard.

He barged into the property with a ‘Rambo’ style knife and stabbed Miss Flanagan in the face and back before she fell into a puddle of her own blood.

After she ran into the kitchen, he grabbed her by the head and aimed the knife at her throat and told her he was going to kill her.

Her life was only saved after he slipped on her blood which was all over the kitchen floor, the court heard.

Davidson left the property after Miss Flanagan mentioned their child.

She suffered deep cuts to both cheeks and fingers, six stab wounds to her back, had collapsed lungs and had lost all feeling in her chin.

Her injuries were so bad she needed 11 hours of surgery after being airlifted to hospital.

Davidson handed himself in to police, telling the desk sergeant: ‘I have stabbed my bird and have come to hand myself in. Have you been to the house? Is she still alive?’

Davidson and Miss Flanagan had been in a relationship for around six years and had a child together, the court heard.

They had separated and rekindled their romance on a couple of occasions, but in 2019 Miss Flanagan said she wanted to end the relationship for good.

Prosecutor Rachel White told the court how Davidson would threaten to harm Miss Flanagan if she entered another relationship and said he would ‘throw acid in her face’.

Ms White said: ‘Then in 2020 she tried again to leave him and he said he would kill her. He told her he would be happy to go to prison if it meant she would be with no one else.’

MORE : Man jailed for stabbing YouTube star to death ‘out of the blue’ with sword

Ms White said in the months prior to the near-fatal attack, Davidson had been taking steroids and was habitually using large quantities of cocaine.

She said: ‘He continued to send her messages, saying he would arrange to find her in a pub and stab her, before sending her a text on the morning of October 5 asking if he could come round to get some trainers from her house.

‘There were in fact no trainers and he eventually told her this, saying he only sent the message in an attempt to come over and kill her.

‘He then proceeded to send more messages while she was at work, saying he was going to kill himself.’

Miss Flanagan arranged to visit him at his home, but before leaving she switched on her location settings on Snapchat and told a friend that if she disconnected, to call for help.

She left work at 3pm and went to Davidson’s parents’ house, but his mother warned Miss Flanagan not to go over as he was in a bad mood.

However, in a rage and carrying what he later described to police as a ‘Rambo’ knife, Davidson came charging into his parents’ home.

Ms White said: ‘She felt a force to her face and landed on the floor. She thought he had punched her but then she felt flesh hanging off her face and there was blood everywhere, and she realised she had been stabbed.

‘She tried to get away from him, but he stabbed her multiple times in her back, which she described as ‘feeling like little punches’.

‘Miss Flanagan grabbed the knife with her hands to stop him from stabbing her in the neck, and was only saved by the fact he missed due to slipping on her blood, which was all over the kitchen floor.’

Defending, Mark Stuart said Davidson had acted out of character, which he attributed to his steroid and cocaine use.

Davidson pleaded guilty to attempted murder and was jailed for 16 years by judge Heather Lloyd. He was also deemed to be a dangerous offender and was given a three-year extended licence period.

MORE : Man charged with murder of wife Brenda Venables who was found in septic tank

MORE : Two arrested on suspicion of murder after woman, 49, found dead at home